The efficacy and safety of nutrient supplements in the treatment of mental disorders: a meta‐review of meta‐analyses of randomized controlled trials

Items in both categories Omega-3 and Depression are listed here

Intervention of Vitamin D for Depression

All Meta-analyses of Vitamin D and Depression

Depression category listing has 209 items along with related searches

ADHD and Omega-3 in VitaminDWiki

Biploar and Omega-3 in VitaminDWiki

Cognition and Omega-3 in VitaminDWiki 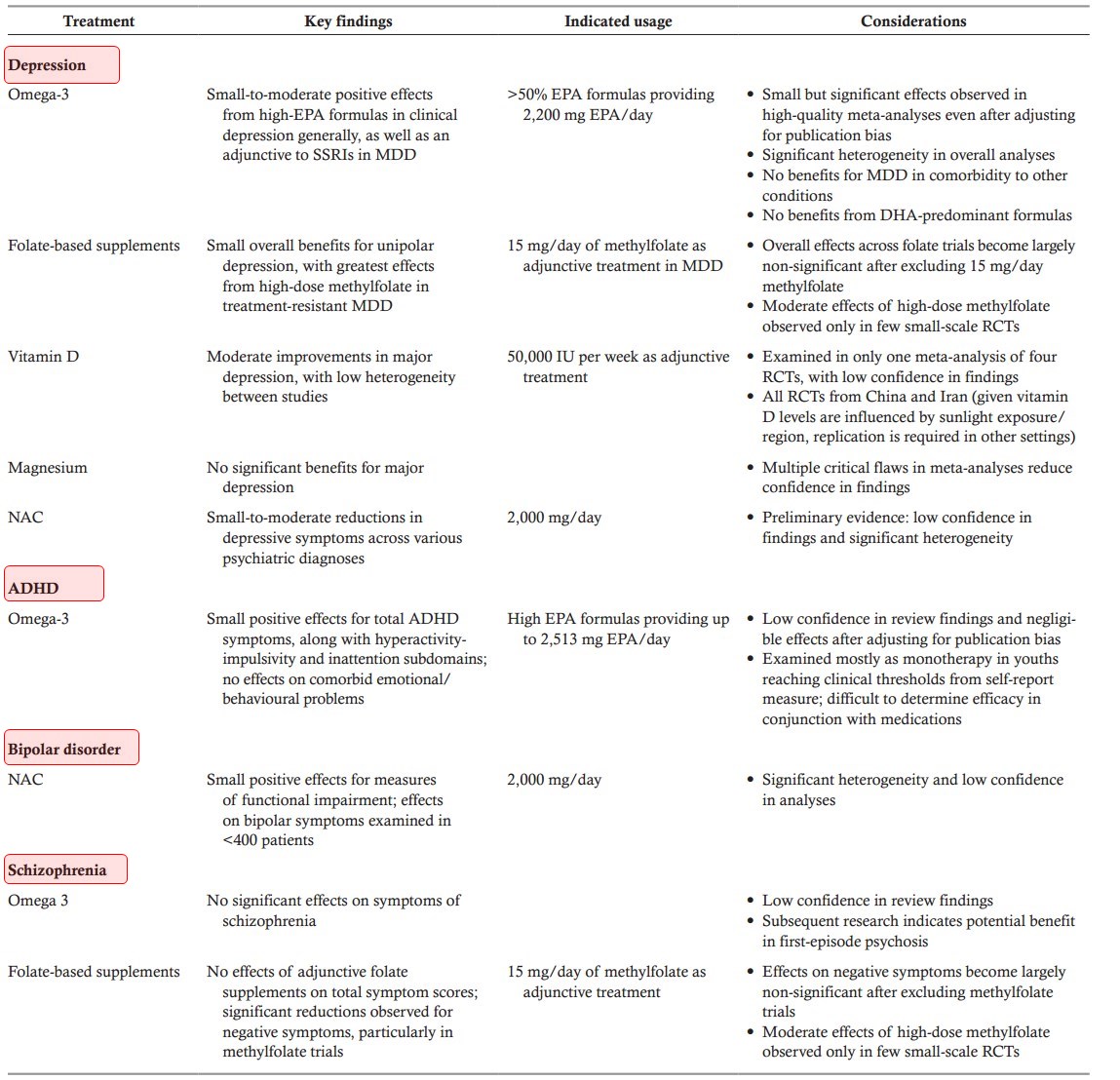 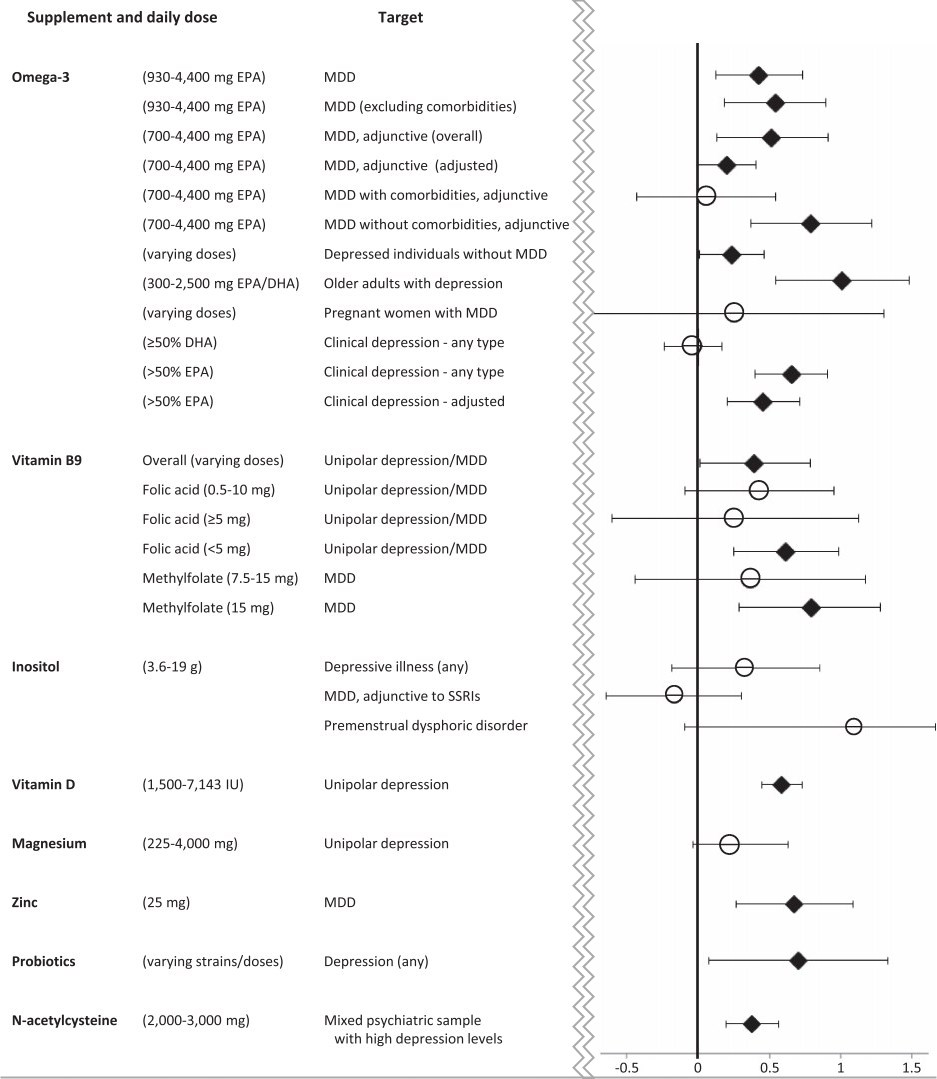 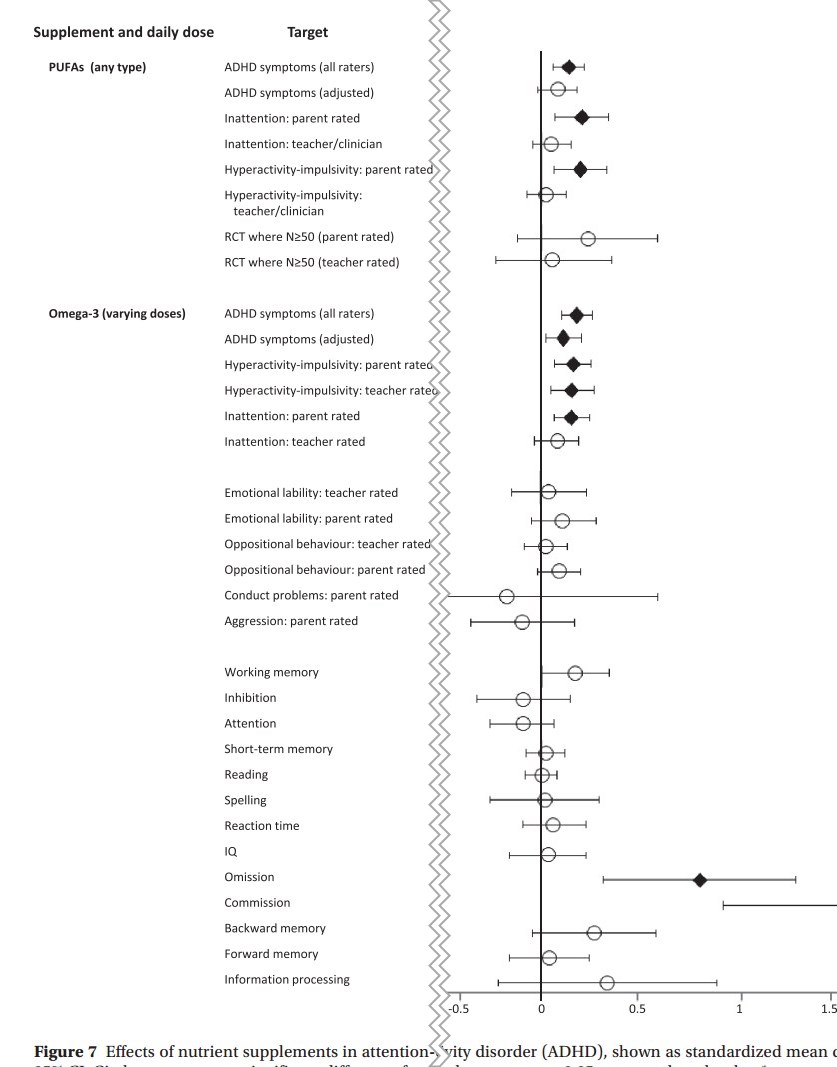 The role of nutrition in mental health is becoming increasingly acknowledged. Along with dietary intake, nutrition can also be obtained from “nutrient supplements”, such as polyunsaturated fatty acids (PUFAs), vitamins, minerals, antioxidants, amino acids and pre/probiotic supplements. Recently, a large number of meta‐analyses have emerged examining nutrient supplements in the treatment of mental disorders. To produce a meta‐review of this top‐tier evidence, we identified, synthesized and appraised all meta‐analyses of randomized controlled trials (RCTs) reporting on the efficacy and safety of nutrient supplements in common and severe mental disorders. Our systematic search identified 33 meta‐analyses of placebo‐controlled RCTs, with primary analyses including outcome data from 10,951 individuals. The strongest evidence was found for PUFAs (particularly as eicosapentaenoic acid) as an adjunctive treatment for depression. More nascent evidence suggested that PUFAs may also be beneficial for attention‐deficit/hyperactivity disorder, whereas there was no evidence for schizophrenia. Folate‐based supplements were widely researched as adjunctive treatments for depression and schizophrenia, with positive effects from RCTs of high‐dose methylfolate in major depressive disorder. There was emergent evidence for N‐acetylcysteine as a useful adjunctive treatment in mood disorders and schizophrenia. All nutrient supplements had good safety profiles, with no evidence of serious adverse effects or contraindications with psychiatric medications. In conclusion, clinicians should be informed of the nutrient supplements with established efficacy for certain conditions (such as eicosapentaenoic acid in depression), but also made aware of those currently lacking evidentiary support. Future research should aim to determine which individuals may benefit most from evidence‐based supplements, to further elucidate the underlying mechanisms.

This meta‐review aggregated and evaluated all the recent top‐tier evidence from meta‐analyses of RCTs examining the efficacy and safety of nutritional supplements in mental disorders. We identified 33 eligible meta‐analyses published from 2012 onwards (26 since 2016), with primary analyses including 10,951 individuals with psychiatric conditions (specifically depressive disorders, anxiety and stress‐related disorders, schizophrenia, states at risk for psychosis, bipolar disorder and ADHD), randomized to either nutritional supplementation (including omega‐3 fatty acids, vitamins, minerals, N‐acetylcysteine and other amino acids) or placebo control conditions. Although the majority of nutritional supplements assessed did not significantly improve mental health outcomes beyond control conditions (see Figures 2-7), some of them did provide efficacious adjunctive treatment for specific mental disorders under certain conditions.

The nutritional intervention with the strongest evidentiary support is omega‐3, in particular EPA. Multiple meta‐analyses have demonstrated that it has significant effects in people with depression, including high‐quality meta‐analyses with good confidence in findings as determined by AMSTAR‐264. Meta‐analytic data have shown that omega‐3 is effective when given adjunctively to antidepressants51, 64. As a monotherapy intervention, the data are less compelling for omega‐3, while DHA or DHA‐predominant formulas do not appear to show any obvious benefit in MDD51, 64.

Omega‐3 supplementation appears to be of greatest benefit when administered as high‐EPA formulas, as significant relationships between EPA dosage and effect sizes are also observed in high‐quality meta‐analyses of RCTs59, 64. Emergent data from RCTs further indicate that omega‐3 may be most beneficial for patients presenting with raised inflammatory markers83. The available meta‐analyses suggest that omega‐3 supplementation is not effective in patients with depression as a comorbidity to chronic physical conditions65, including cardiometabolic diseases, a finding which has been replicated in subsequent trials84. In light of current adverse event data, omega‐3 seems to represent a safe adjunctive treatment.

More research is needed concerning the efficacy of omega‐3 supplements in other mental health conditions. For instance, omega‐3 was indicated as potentially beneficial for children with ADHD, again with high EPA formulas conferring largest effects79. However, the negligible effect sizes after controlling for publication bias, along with the low review quality identified by AMSTAR‐2, reduces confidence in findings. Additionally, whereas the existing meta‐analytic data have found a lack of significant benefits in people with schizophrenia55, 59, subsequent trials in young people with first‐episode psychosis have reported more positive, though mixed, results85, 86, putatively ascribed to neuroprotective effects87, 88.

Adjunctive treatment with folate‐based supplements was found to significantly reduce symptoms of MDD and negative symptoms in schizophrenia54, 67. However, in both cases, AMSTAR‐2 ratings indicated low confidence in review findings, and positive overall effects in these meta‐analyses were driven largely by RCTs of high‐dose (15 mg/day) methylfolate. Methylfolate is readily absorbed, overcoming any genetic predispositions towards folic acid malabsorption, and successfully crossing the blood‐brain barrier89, 90. Indeed, a placebo‐controlled trial of methylfolate in schizophrenia reported significant increases in white matter within just 12 weeks, co‐occurring with a reduction in negative symptoms91.

RCTs not captured in our meta‐review92 and retrospective chart analyses93 have further indicated benefits of methylfolate supplementation in other mental disorders. Considering this, alongside the lack of detrimental side effects (in fact, significantly fewer adverse events in samples receiving treatment compared to placebo54), further research on methylfolate as an adjunctive treatment for mental disorders is warranted.

Regarding other vitamins (such as vitamin E, C or D), minerals (zinc and magnesium) or inositol, there is currently a lack of compelling evidence supporting their efficacy for any mental disorder, although the emerging evidence concerning positive effects for vitamin D supplementation in major depression has to be mentioned.

Beyond vitamins, minerals and omega‐3 fatty acids, certain amino acids are now emerging as promising adjunctive treatments in mental disorders. Although the evidence is still nascent, N‐acetylcysteine in particular (at doses of 2,000 mg/day or higher) was indicated as potentially effective for reducing depressive symptoms and improving functional recovery in mixed psychiatric samples72. Furthermore, significant reductions in total symptoms of schizophrenia have been observed when using N‐acetylcysteine as an adjunctive treatment, although with substantial heterogeneity between studies, especially in study length (in fact, N‐acetylcysteine has a very delayed onset of action of about 6 months56, 94).

N‐acetylcysteine may assist in treatment of schizophrenia, bipolar disorder and depression through decreasing oxidative stress and reducing glutamatergic dysfunction96, but has wider preclinical effects on mitochondria, apoptosis, neurogenesis and telomere lengthening of uncertain clinical significance.

NMDA receptors are activated by binding D‐serine or glycine97. Sarcosine is a naturally occurring glycine transport inhibitor and can act as a co‐agonist of NMDA98. As such, D‐serine, glycine and sarcosine may improve psychotic symptoms through NDMA modulation99. We found reductions in total psychotic symptoms, but not negative symptoms, with glycine and sarcosine. Additionally, we found that glycine was not effective in combination with clozapine. This may be because clozapine already acts as a NMDA receptor glycine site agonist97.

The role of the gut microbiome in mental health is also a rapidly emerging field of research99. Gut microbiota differs significantly between people with mental disorders and healthy controls, and recent faecal transplant studies using germ‐free mice indicate that these differences could play a causal role in symptoms of mental illness41, 100, 101. Intervention trials that aim to investigate the effect of probiotic formulations on clinical outcomes in mental disorders are now beginning to emerge71. We included one recent meta‐analysis that evaluated the pooled effect of probiotic interventions on depressive symptoms: while the primary analysis reported no significant effect, the moderately large effect in the three included studies suggests that probiotics may be beneficial for those with a clinical diagnosis of depression rather than subclinical symptoms71. However, additional trials are required to replicate these results, to evaluate the long‐term safety of probiotic interventions, and to elucidate the optimal dosing regimen and the most effective prebiotic and probiotic strains102.

While this meta‐review has highlighted potential roles for the use of nutrient supplements, this should not be intended to replace dietary improvement. The poor physical health of people with mental illness is well documented103, and excessive and unhealthy dietary intake appears to be a key factor involved4, 5. Improved diet quality is associated with reduced all‐cause mortality104. whereas multivitamin and multimineral supplements may not improve life expectancy18-20.

A meta‐analysis of dietary interventions in people with severe mental illness found benefits on a number of physical health aspects105. It is unlikely that standard nutrient supplementation will be able to cover all beneficial aspects of improved dietary intake. In addition, whole foods may contain vitamins and minerals in different forms, whereas nutrient supplements may only provide one form. For example, vitamin E occurs naturally in eight forms, but nutrient supplements may only provide one form. Dietary interventions also reduce dietary elements in excess, such as salt, which is a key driver of premature mortality13.

While improving dietary intake appears to have a clear role in increasing life expectancy and preventing chronic disease, there is currently a lack of studies evaluating this in people with mental disorders. Additionally, although recent meta‐analyses of RCTs have demonstrated that dietary improvement reduces symptoms of depression in the general population106, more well‐designed studies are needed to confirm the mental health benefits of dietary interventions for people with diagnosed psychiatric conditions25.

Our data should be considered in the light of some limitations. First, although meta‐analyses of RCTs typically constitute the top‐tier of evidence, it is important to acknowledge that many of the outcomes included in this meta‐review had significant amounts of heterogeneity between the included studies, or were based on a small number of studies. A next step within this field of research is to move from study‐level to patient‐level meta‐analyses, as this would provide a more personalized picture of the effects of nutrient supplements derived from adequately powered moderator, mediator and subgroup analyses. Additionally, comparing nutrient supplements in the same trial would be desirable.

It is recognized that people with mental disorders commonly take nutritional supplements in combinations. In some instances, research has supported this approach, most commonly in the form of multivitamin/mineral combinations107. However, recent research in the area of depression has revealed that “more is not necessarily better” when it comes to complex formulations108. Of note, recent large mood disorder clinical trials have revealed that nutrient combinations may not have a more potent effect, and in some cases placebo has been more effective47, 108, 109.

In conclusion, there is now a vast body of research examining the efficacy of nutrient supplementation in people with mental disorders, with some nutrients now having demonstrated efficacy under specific conditions, and others with increasingly indicated potential. There is a great need to determine the mechanisms involved, along with examining the effects in specific populations such as young people and those in early stages of illness. A targeted approach is clearly warranted, which may manifest as biomarker‐guided treatment, based on key nutrient levels, inflammatory markers, and pharmacogenomics 83, 91, 110.

Printer Friendly PDF this page! Follow this page for updates
This page is in the following categories (# of items in each category)
Depression 209 Meta-analysis of Vitamin D 456 Top news 808 Cognitive 282 Vitamin D and Omega-3 327 ADHD 35 Bipolar 14
Edit Comments Files 4