Reminder: increasing Omega-3 increases by ~30% the amount of vitamin D which gets to cells

Omega-3 and Cognition (items in both categories) 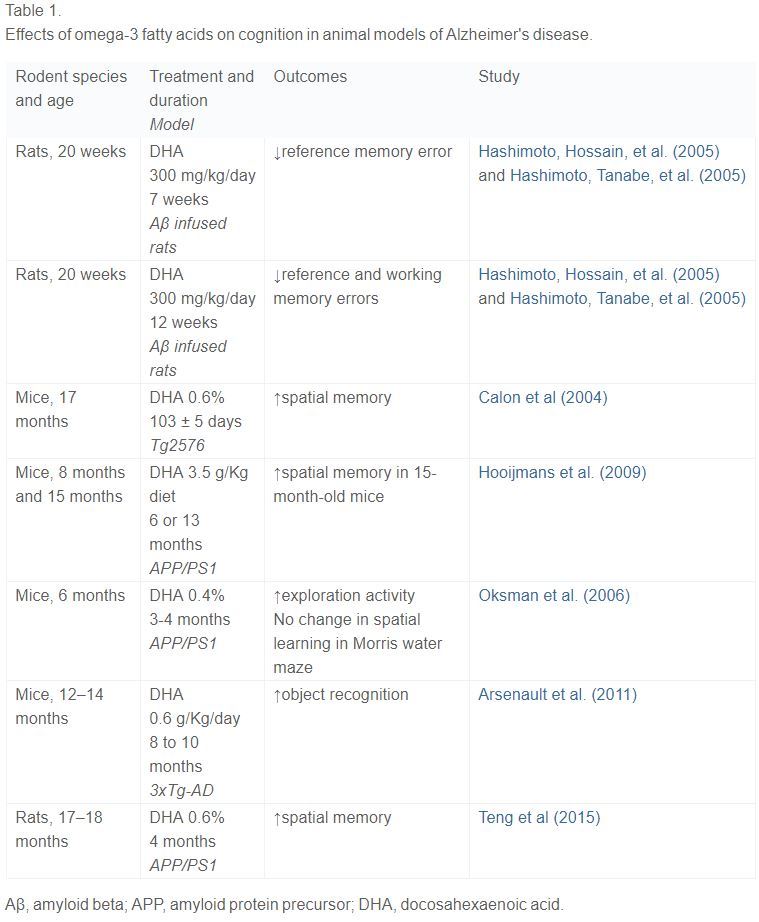 Background
As the prevalence of neurodegenerative diseases increases steadily, the need to develop new treatment approaches intensifies and the possibility of targeting risk and protective factors to delay onset of these diseases is attracting more interest. Dietary habits stand as one of the most promising modifiable risk factors for both Alzheimer's (AD) and Parkinson's (PD) diseases.

Key findings and Conclusions
These studies have shown that dietary n-3 PUFA treatments consistently improve cognitive performance in animal models and may also exert disease-modifying actions. N-3 PUFA also provide protection to dopaminergic neurons in animal models of PD and possibly recovery after lesion. Furthermore, some of these effects might depend on specific diet formulations to protect long-chain fatty acids from oxidation or synergies with other nutrients. More generally, this review aims at providing evidence that adjustments in the consumption of dietary lipids alone or combined with other nutrients may be a cost-effective intervention to optimize brain function and prevent AD or PD.

Scientists, health professionals and the lay public increasingly recognize the potential benefit of nutrition in the prevention of CNS-related diseases. A steep rise in reported consumption of n-3 PUFA supplements was recently reported between 1999 and 2012 (Kantor, Rehm, Du, White, & Giovannucci, 2016). However, since the diagnosis of NDD is made a long time after disease onset, we may wonder if it is not too late to intervene. Manipulating dietary intake of fatty acids could be a relevant strategy to postpone the appearance of the more severe symptoms of NDD. Animal, epidemiology and non-AD clinical data all suggest cognitive benefits of n-3 PUFA, while animal studies may highlight evidence of disease modifications. Clinical evidence however remains limited to possible benefits in prodromal stages. It could also be interesting to combine n-3 PUFA with other nutrients such as polyphenols, which may also have cognitive benefits. Indeed, with the Neurophenols Consortium, our group has just reported the cognitive benefits of polyphenol extracts in the 3xTg-AD animal model of AD, without clear impact on canonical neuropathological markers (Dal-Pan et al., 2017).

It will still be difficult to adopt the best omega-3 PUFA supplementation strategy, as we need a better understanding of mechanisms of NDD. That includes pharmacodynamic and pharmacokinetic studies. A more precise knowledge of AD pathogenesis and PUFA metabolism could lead to the constitution of different subgroups of patients more likely to take benefit of omega-3 PUFA supplementation. Furthermore, larger clinical trials on prevention should be made in order to understand the real impact of omega-3 PUFA on neuroprotection in the population. In summary, literature shows that many nutrients (n-3 PUFA, polyphenols, antioxidants …) have a potential benefit in the prevention of diseases and especially those related to the CNS through direct effect on brain function and not necessarily related to classical pathophysiological cascades. As NDD prevalence will continue to rise in the next decades, prevention strategies based on nutrition needs to be thoroughly investigated now, in the hope of defining an optimal diet for the aging brain.