Pages listed in BOTH of the categories Inflammation and Depression

Pages listed in BOTH of the categories Inflammation and Omega-3

Clinicians and researchers are facing a huge challenge of developing new treatments for major depressive disorder (MDD) despite the advance of neurosciences. Current pharmacotherapy overwhelmingly dominates depression treatment but does not meet clinical needs. Indeed, using current diagnostic systems inevitably makes MDD patient groups heterogeneous and results in only small to modest effects from every antidepressant treatment.
As detailed in a consensus statement in World Psychiatry1 by my colleagues and I from the International Society for Nutritional Psychiatry Research, nutritional medicine is a promising strategy for the crisis of undereffectiveness in depression treatment.
Omega-3 polyunsaturated fatty acids (PUFAs), including eicosapentaenoic acid (EPA) and docosahexaenoic acid (DHA), have a range of neurobiological activities that contribute to their potential antidepressant effects,2 which have been supported by recent well-conducted randomized controlled trials (RCTs).3–6 However, the effect sizes of omega-3 PUFAs for MDD are also modest.3 To improve the clinical application, it is important to “stratify” MDD for specific therapies, which is so-called personalized medicine.
Pharmacotherapy for MDD in pregnant women and children is still a clinical dilemma. To date, the US Food and Drug Administration approves no psychotropic drugs during pregnancy and even issues a black box warning of suicidal risk on antidepressants for children. Omega-3 PUFAs are important nutrients for pregnant women and young brains.
So far, 2 double-blind, placebo-controlled RCTs have been conducted to investigate the therapeutic efficacy of omega-3 PUFAs in pregnant women with clinically defined MDD.6,7 Rees and colleagues’ study 7 failed to prove efficacy probably because of the insufficient composition in supplementation (ie, 0.4 g/d of EPA and 1.5 g/d of DHA). Indeed, previous clinical trials and meta-analyses have suggested that EPA, rather than DHA, might be the most active component of omega-3 PUFAs’ antidepressant effects. 3 The other study,6 on the other hand, using 2.2 g/d of EPA and 1.2 g/d of DHA, confirmed that omega-3 PUFAs were significantly better than placebo to improve depressive symptoms and achieve treatment response. Suboptimal levels of omega-3 PUFAs are emerging as a potential risk factor for brain disorders in younger populations. A small RCT 8 recruiting 20 children aged between 8 and 12 years showed that daily supplementation of 0.4 g EPA and 0.4 g DHA was significantly better than placebo to improve depression symptomatology in a 16-week intervention. These RCTs in pregnant women and children are well conducted and the results are promising, but the sample sizes are too small to draw a solid conclusion. Therefore, we need more supportive evidence from more RCTs.
On the basis of evidence that some MDD patients have increased inflammatory markers and data suggesting that increasing omega-3 PUFA intake shifts eicosanoid metabolism toward production of anti-inflammatory substances, Rapaport and colleagues9 recently published an interesting RCT in which they demonstrated that EPA monotherapy was more effective than placebo or DHA in MDD patients with elevated markers of inflammation. Specifically, the overall treatment group differences were negligible (effect size ES, −0.09 to −0.13) among MDD patients without stratification. However, subjects classified with “high” inflammation improved more with EPA than placebo (ES, −0.39 to −1.11 from any 1 marker to 4–5 markers) or DHA (ES, −0.60 to −1.10 from any 1 marker to 4–5 markers). Furthermore, EPA-placebo separation increased with increasing numbers of markers of high inflammation (Figure 1). In other words, employing biomarkers of inflammation indeed facilitated identification of a more homogeneous cohort of subjects with MDD who would respond better to omega-3 PUFA antidepressant treatment.
Figure 1 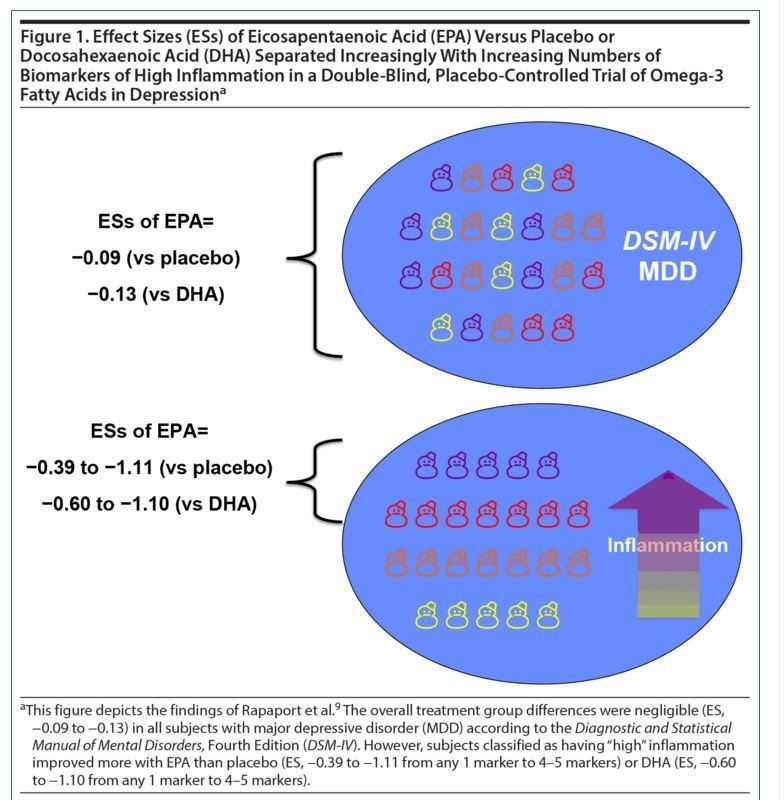 Chronic inflammation is involved in the etiology of heart disease, stroke, cancer, and metabolic syndrome as well as MDD. Of particular relevance to this context, we have previously demonstrated that lower omega-3 PUFA levels are associated with an increased risk of developing interferon (IFN)-α–induced depression.10 To test the hypothesis that lower omega-3 PUFA levels reflect less “endogenous anti-inflammatory capability” in those who later develop depression, my colleagues and I conducted a 2-week double-blind RCT to test the effects of omega-3 PUFA supplementation in the prevention of IFN-α–induced depression.11 We found that incident rates of IFN-α–induced depression were significantly lower in EPA-treated patients, but not DHA- or placebo-treated patients. This study further confirms the notion that omega-3 PUFAs may be effective antidepressants in the context of depression associated with inflammation.

Omega-3 PUFAs are well tolerated and accepted by general populations for their positive health effects. More research on stratifying depression is therefore needed to justify the clinical application of omega-3 PUFAs as one of the first-line antidepressant treatments in specific populations of patients with MDD.


Potential conflicts of interest: None reported.

Depression due to inflammation reduced by Omega-3 (children and pregnant) – Nov 2015         Printer Friendly PDF this page! Follow this page for updates
This page is in the following categories (# of items in each category)
Depression 240 Vitamin D and Omega-3 374 Inflammation 159