Observation: VDR down and up-regulation, Sunlight/UVB is good 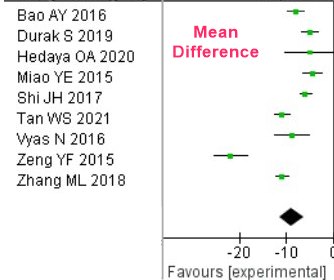 The purpose of this meta-analysis was to evaluate the relationship between serum 25-hydroxyvitamin D[25(OH)D] levels and gastric cancer. PubMed, Embase, Cochrane Library, Web of Science, The China Academic Journals full-text database, Wanfang Database of Chinese Academic Journals, VIP Chinese Science and Technology Periodicals database, and Chinese Biomedical Literature database were systematically searched. Case-control studies on the correlation between serum 25-hydroxyvitamin D levels and gastric cancer were retrieved, and the data extracted were analyzed. The results of 9 case-control studies containing 671 patients showed that serum 25(OH)D levels in the gastric cancer group were lower than those in the control group (weighted mean difference (WMD) = -8.90, 95% confidence interval (CI): -11.5, -6.32, p &lt; 0.01);
the risk of vitamin D deficiency in the gastric cancer group was higher than that in the control group (Odds ratio = 3.09, 95% CI: 1.96, 4.87, p &lt; 0.01). The serum 25(OH)D levels in patients with well and moderately differentiated gastric cancer were higher than those in patients with poorly differentiated gastric cancer (WMD = -3.58, 95% CI: -6.41, -0.74, p = 0.01). Thus, low levels of vitamin D may increase the risk of gastric cancer. Systematic review registration: PROSPERO CRD42022327942.
&nbspDownload the PDF from VitaminDWiki

Vitamin D has been shown to be beneficial at reducing the risk of cancer; however, studies examining esophageal and gastric cancer have been scarce and findings inconsistent. The UK Biobank cohort was used for this nested case–control study (N = 3732). Primary, incident esophageal and gastric cancer cases diagnosed after recruitment were identified via linkage to National Cancer Registries. Tropospheric Emissions Monitoring Internet Service database was used to calculate ambient annual UVB dose (D-UVB). Conditional logistic regression was used to investigate the relationship between annual ambient D-UVB and risk of esophageal and gastric cancer, and odds ratios (ORs) are reported. In total, 373 esophageal and 249 gastric cancer cases and 3110 age- and gender-matched controls were included in the study. We found a strong inverse association between annual ambient D-UVB and odds of developing esophageal or gastric cancer: Compared to the lowest tertile, OR for the highest tertile was 0.64 (95%CI:0.51–0.79) in adjusted analysis.
The association was strengthened when restricted to esophageal cancer (OR = 0.60; 95%CI:0.45–0.80) and
esophageal adenocarcinoma cases (OR = 0.48; 95%CI: 0.34–0.68). Similar results were found in unadjusted and stratified analysis. In conclusion, ambient UVB radiation is inversely associated with the development of esophageal and gastric cancer, even in a high-latitude country.
&nbspDownload the PDF from Sci-hub via VitaminDWiki

Genes restrict how much Vitamin D gets to Gastric Cancer - 2021

Gastric cancer (GC) is one of the most aggressive malignancies, currently ranking third among cancers leading to death worldwide. Despite the recent advancements in GC research, it is most often diagnosed during the terminal stages and with limited treatment modalities contributing to its poor prognosis and a lower survival rate.

Much research has provided conflicting results between a vitamin D deficient status and the development of GC. Vitamin D is a well-known and essential hormone classically known to regulate calcium and phosphate absorption, enabling adequate mineralization of the skeletal system. However, the function of vitamin D is multidimensional. It possesses unique roles, including acting as antioxidants or immunomodulators while crossing the cell membrane, performing several intracellular functions, participating in gene regulation, and controlling the proliferation and invasion of cancer cells, including those of GC.

In light of this, it is imperative to analyze the causes of GC, review the factors that can be used to enhance the effectiveness of treatments, and discover the tools to determine prognosis, reduce mortality, and prevent GC development. In this review, we have summarized recent investigations on multiple associations between vitamin D and GC, emphasizing genetic associations, vitamin D receptors, and the prevalence of hormone deficiency in those developing this aggressive malignancy.

Several studies have been conducted to explore the relationship between vitamin D and GC. We observed a variety of correlations between vitamin D and GC. In most studies, GC patients have shown an increased prevalence of VDD, although few studies on VDD prevalence in GC patients are paradoxical. UVB radiation has been shown in most ecological studies to lessen the incidence and mortality of GC. An adequate vitamin D level has been associated with an increase in the survival rate of GC patients, and a low vitamin D level can be considered as a poor prognostic factor in GC.

Vitamin D exerts an anti-cancer effect by different mechanisms, such as regulating epigenetic pathways, upregulating the expression of miRNAs, boosting the action of cisplatin, stimulating TSGs, and regulating intracellular signal transduction. We also found that serum vitamin D is lower in the HP-positive patients than negative ones, and vitamin D deficient patients fail to eliminate HP. Based on the facts presented above, we may conclude that vitamin D is a protective factor in GC. It can be utilized as a promising technique to treat GC and increase survival rates by correcting the deficiency of vitamin D. However, additional studies are required to fully assess the genetic association of VDR in GC for a more profound knowledge of how to diagnose and treat the aggressive malignancy early and effectively to maximize the survival outcomes.
&nbspDownload the PDF from VitaminDWiki

Gastric Cancer, Vitamin D, VDR, UV - many studies         Printer Friendly PDF this page! Follow this page for updates
This page is in the following categories (# of items in each category)
UV and Vitamin D 361 Cancer - Other 58