Summary of Osteoarthritis and Vitamin D

Note: Osteoporosis causes bones to become fragile and prone to fracture
Osteoarthritis is a disease where damage occurs to the joints at the end of the bones

"Osteoarthritis (OA) also known as degenerative arthritis or degenerative joint disease, is a group of mechanical abnormalities involving degradation of joints,1
including articular cartilage and subchondral bone. Symptoms may include joint pain, tenderness, stiffness, locking, and sometimes an effusion.
A variety of causes—hereditary, developmental, metabolic, and mechanical—may initiate processes leading to loss of cartilage.
When bone surfaces become less well protected by cartilage, bone may be exposed and damaged.
As a result of decreased movement secondary to pain, regional muscles may atrophy, and ligaments may become more lax.2"

PubMed has a good overview Which includes:

Osteoarthritis is the most common joint disorder.

Osteoarthritis is caused by 'wear and tear' on a joint.

"Often, the cause of OA is unknown. It is mainly related to aging. The symptoms of OA usually appear in middle age. Almost everyone has some symptoms by age 70. However, these symptoms may be minor. Before age 55, OA occurs equally in men and women. After age 55, it is more common in women."

Severe cases of OA might need surgery to replace or repair damaged joints. Surgical options include: 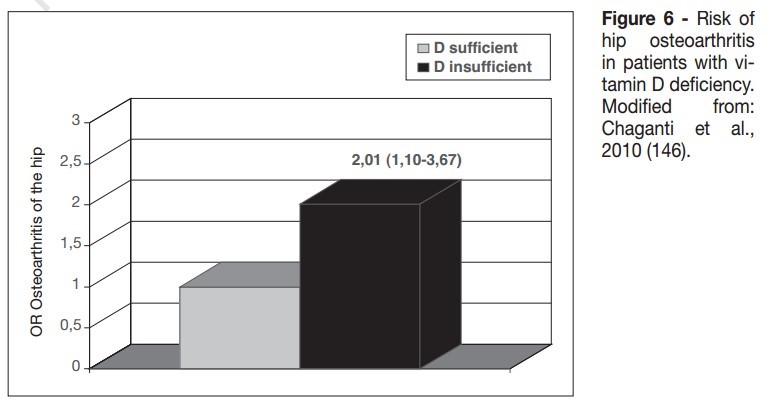 Pages listed in BOTH the categories Bone and Vitamin K2

During Spring/Summer of 2014 (age 68) I got sharp pain below both knees - which my Dr. diagnosed as early indication of OA.
Tried a shotgun of 7 solutions (in addition to vitamin D) and the pain went away for several weeks
Stopped all solutions and the pain returned in a few days (still had vitamin D)
Restarted with just a subset of solutions - and have had no pain at all for the past 10 days
Current solutions are

Note: Magnesium: it helps muscles see Wikipedia Magnesium in biology and Magnesium deficiency (medicine)
Also see Overview Magnesium and vitamin D
I got back into Feldekrais exercises every 4 days (which I have used for 30+ years) to restore flexibility, muscle strenth, and use of different muscles to accomplish the same movement.

25-Hydroxyvitamin D and osteoarthritis: A meta-analysis including new data

Arthritis Rheum. 2009 May;60(5):1381-9.
CONCLUSION: Sunlight exposure and serum 25(OH)D levels are both associated with decreased knee cartilage loss (assessed by radiograph or MRI). This is best observed using the whole range of 25(OH)D levels rather than predefined cut points and implies that achieving vitamin D sufficiency may prevent and/or retard cartilage loss in knee OA. PMID: 19404958 CLICK HERE for full article

Association of low dietary vitamin K intake with radiographic knee osteoarthritis in the Japanese elderly population: dietary survey in a population-based cohort of the ROAD study.

CONCLUSIONS: The present cross-sectional study using a population-based cohort supports the hypothesis that low dietary vitamin K intake is a risk factor for knee OA. Vitamin K may have a protective role against knee OA and might lead to a disease-modifying treatment. PMID: 19997813

Osteoarthritis of Foot and Ankle

Association between serum levels of 25-hydroxyvitamin D and osteoarthritis: a systematic review

Objective. To systematically review the evidence for association between serum 25-hydroxyvitamin D (25-(OH)D) and OA and the effect of vitamin D therapy on OA.

Methods. An English Medline, EMBASE and Cochrane Library search for vitamin D and OA from January 1980 to June 2012 was performed. Randomized controlled trials (RCTs), cohort, case–control and cross-sectional studies in adults were included. The methodological quality of the selected studies was assessed and a best-evidence synthesis was used to summarize the results due to the heterogeneity of the studies.

Results. Of the 86 evaluated articles, 2 RCTs and 13 observational studies were included in the final analyses.
The number of participants ranged from 64 to 1644 (0–100% women).
The RCTs were only reported in abstract form and showed inconsistent results, most likely due to variations in their study design.
There was insufficient or limited evidence for associations between 25-(OH)D and hand or hip OA.
For knee radiographic OA as assessed by the Kellgren and Lawrence (KL) score, there was moderate evidence showing that low levels of 25-(OH)D were associated with increased progression of radiographic OA.
Strong evidence for an association between 25-(OH)D and cartilage loss was apparent when joint space narrowing and changes in cartilage volume were considered collectively as cartilage loss.

Conclusion. 25-(OH)D appears to be implicated in structural changes of knee OA rather than symptoms, and further well-designed RCTs are required to determine whether vitamin D supplementation can slow disease progression. There is insufficient evidence for other sites.

Printer Friendly PDF this page! Follow this page for updates
This page is in the following categories (# of items in each category)
Overviews 76 Osteoarthritis 49
Edit Comments Files 3