Imbalance between Omega-6 and Omega-3 Polyunsaturated Fatty Acids in Early Pregnancy Is Predictive of Postpartum Depression in a Belgian Cohort.

Omega-3 is great before, during, and after pregnancy

Items in both categories Pregnancy and Omega-3 are listed here:

Items in both categories Pregnancy and Depression are listed here: 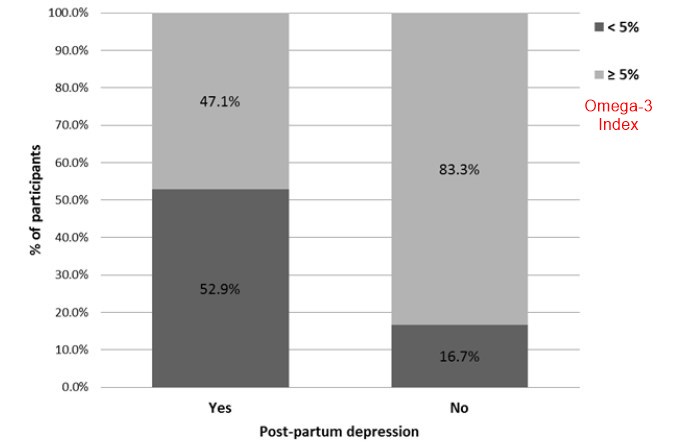 While studies revealed that the omega-3 polyunsaturated fatty acids (n-3 PUFA) and their mediators would be able to regulate several biological processes involved into the development of postpartum depression (PPD), evidence from observational studies remains mixed. The aim of the present study was to investigate the association between maternal erythrocyte n-3 PUFA, measured in early pregnancy, and the risk of PPD. A Belgian cohort of 72 healthy women was screened. Erythrocyte fatty acids were analysed using gas chromatography. PPD was assessed using the Bromley Postnatal Depression Scale by phone interview one year after delivery. We observed a significant negative association between docosahexaenoic acid (DHA) levels and the risk of postpartum depression in the adjusted model (p = 0.034). Higher n-6/n-3 and arachidonic acid (AA)/eicosapentaenoic acid (EPA) ratios were significantly associated with an increased odds of PPD (p = 0.013 and p = 0.043, respectively). Women with an omega-3 index <5% had a 5-fold increased risk of depressive episode than did those with an omega-3 index ≥5% (OR 5.22 (95%CI 1.24-21.88)). A low n-3 PUFA status, alone and combined with high n-6 PUFA status, in early pregnancy was associated with a greater risk of PPD. Management of maternal n-3 PUFA deficiency can be a simple, safe and cost-effective strategy for the prevention of this major public health issue.

Printer Friendly PDF this page! Follow this page for updates
This page is in the following categories (# of items in each category)
Pregnancy 743 Depression 211 Vitamin D and Omega-3 328
Edit Comments Files 2