Impact of Omega-3 Fatty Acids on the Gut Microbiota

Items in both categories Omega-3 and Inflammation are listed here:

Items in both categories Omega-3 and Depression are listed here: 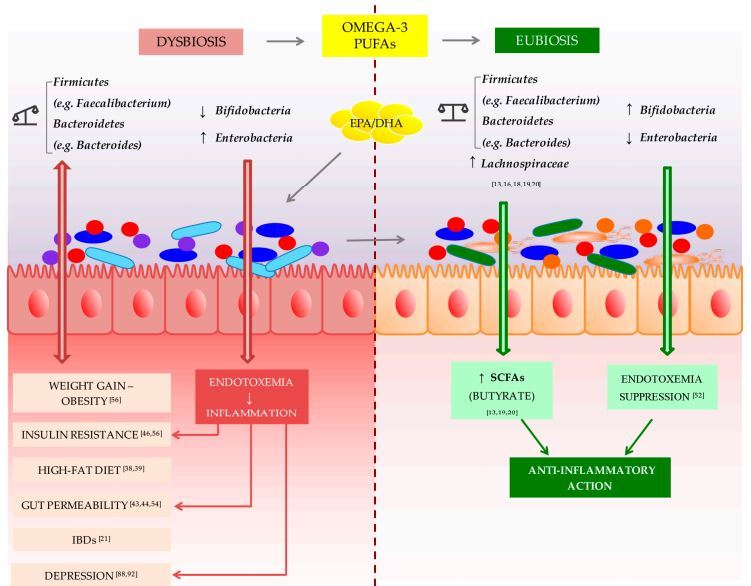 Long-term dietary habits play a crucial role in creating a host-specific gut microbiota community in humans. Despite the many publications about the effects of carbohydrates (prebiotic fibers), the impact of dietary fats, such as omega-3 polyunsaturated fatty acids (PUFAs), on the gut microbiota is less well defined. The few studies completed in adults showed some common changes in the gut microbiota after omega-3 PUFA supplementation. In particular, a decrease in Faecalibacterium, often associated with an increase in the Bacteroidetes and butyrate-producing bacteria belonging to the Lachnospiraceae family, has been observed.

Coincidentally, a dysbiosis of these taxa is found in patients with inflammatory bowel disease.

Omega-3 PUFAs can exert a positive action by reverting the microbiota composition in these diseases, and increase the production of anti-inflammatory compounds, like short-chain fatty acids. In addition, accumulating evidence in animal model studies indicates that the interplay between gut microbiota, omega-3 fatty acids, and immunity helps to maintain the intestinal wall integrity and interacts with host immune cells.
Finally, human and animal studies have highlighted the ability of omega-3 PUFAs to influence the gut–brain axis, acting through gut microbiota composition. From these findings, the importance of the omega-3 connection to the microbiota emerges, encouraging further studies.

Omega-3 improves gut bacteria, reduces inflammation and depression – Dec 2017         Printer Friendly PDF this page! Follow this page for updates
This page is in the following categories (# of items in each category)
Depression 237 Vitamin D and Omega-3 371 Inflammation 157