Effects of Vitamin D, K1, and K2 Supplementation on Bone Formation by Osteoblasts In Vitro: A Meta-analysis

This is a meta-analysis of scores of studies of bone formation in the lab (not the body)
Noet that the effect size on the vertical axis of the charts is non-linear and varies with the vitamin.
It appears that Vitamin D produces the most bone formation.
I am not clear about how much benefit K1 or K2 provide to bone formation by Vitamin D in the lab
Note: Vitamin K1 and K2 have both been proven to provide many other benefits to the human body

Pages in both of the categories Vitamin K and Cardiovascular

Pages in bothof the categories Vitamin K and Calcium

Pages in both of the categories Bone and Vitamin K

Pages in both the categories Bone and

Bone loss is a major health problem that many aging individuals will face and thus research focusing on enhancing bone formation is of great importance. Cell biology or in vitro studies are particularly useful in exploring the exact effects a vitamin, supplement or drug has on particular processes within a certain cell type. Although there have been many cell biology articles focusing on the effects of vitamin D, K1 or K2 addition on bone formation in vitro, there has yet to be a consensus amongst the literature. The purpose of this article is to determine the effects of vitamin D, K1 and K2 supplementation on osteoblast maturation parameters through meta-analysis of past cell biology literature. A Hedges d effect size was calculated for each experiment extracted from past literature and the experiments were grouped by experiment and cell type. Homogeneity was assessed by the Cochran's Q test, while the effect sizes' departure from zero was assessed by a 95% confidence interval and a non-directional test. Supplementation with vitamin D, K1 and K2, along with the combination of vitamin K2+ 1,25-dihydroxyvitamin D, increased bone mineralization, while not consistently affecting all of the other parameters associated with bone formation. Vitamin K2 and D addition had variable effects on bone formation using different cell types, which calls into question the suitability of particular cell lines as models for clinical trials. Therefore, the conditions and parameters in which bone formation is studied in vitro must be considered carefully before running a vitamin supplementation or drug-testing experiment. 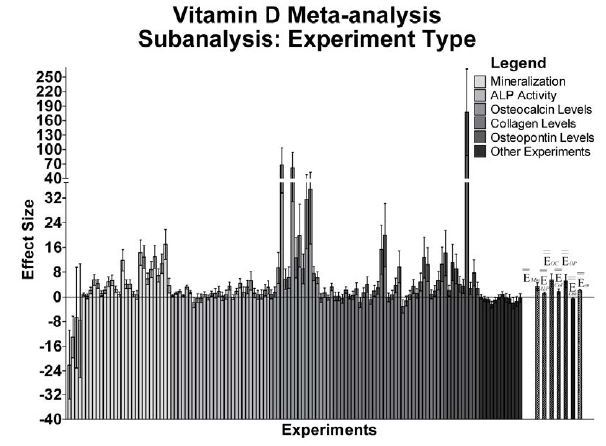 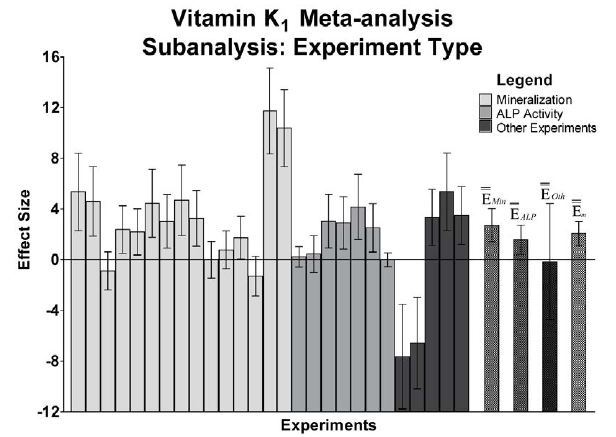 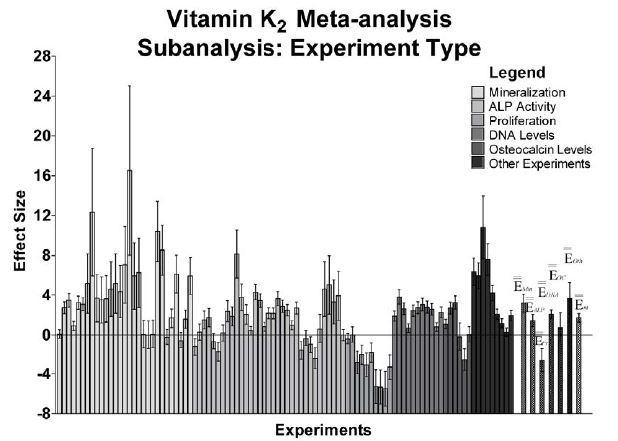 Homogeneity of the experiments within a subgroup of the metaanalysis will increase the confidence that the grand mean effect size will represent any study looking at the same phenomenon under the same conditions (i.e. same cell type). Some of the subgroups that were analyzed within these meta-analyses were heterogeneous and thus one cannot be completely certain that the results seen will represent every vitamin supplementation cell biology paper. Ultimately it would be ideal to continue further subanalysis of all of the heterogeneous subgroups until each group is homogeneous. However, further subanalysis on all of the subgroups was not possible with the already small number of experiments in some of the groups.

Both the confidence interval (CI) test and the non-directional test were used to assess if the grand mean effect sizes were significantly different than zero. However, there were times within the metaanalyses when the results of the confidence interval test did not agree with that of the non-directional test. The non-directional test is more conservative than the CI test and is therefore more likely to result in nonsignificance when the sample size is small and the variance is large [40]. Simultaneously, the confidence interval test is more affected by outliers than the robust non-directional test [41] and could lead to nonsignificance when there are outliers present. Altogether, this could indicate why the results of both statistical tests did not agree with each other in every scenario. In the cases where the tests do not agree, the effect sizes could still be significantly different than zero. Therefore the definition of a significant result within meta-analyses in general might need to be re-evaluated [40].

A species specific effect of 1,25D on mineralization was observed in past literature, where 1,25D supplementation resulted in increased mineralization in human osteoblast cultures [17,32,35,42,43], but had primarily negative effects on mineralization in the mouse MC3T3 cell line [25,44]. In addition, the supplementation of 1,25D to mice resulted in increased levels of pyrophosphate and therefore decreased mineralization of bones within the mouse [45], as there needs to be low pyrophosphate levels for mineralization to occur in vitro and within the body [46]. Increased pyrophosphate levels also leads to adverse effects within cell culture, including autophagic cell death observed in inorganic pyrophosphatase-mutated yeast cells under fermentative conditions [47]. Altogether, this could help explain why vitamin D addition had differential effects on osteoblast maturation parameters in murine or human osteoblasts.
Clinical meta-analyses have previously revealed that supplementation with vitamin D and vitamin K resulted in increased bone mineral density at the femoral neck and lumbar spine, respectively [48], which agrees with the significant increase in mineralization we observed using supplementation with vitamin D and K. Similar to our meta-analyses, the results of both of these studies must be treated with caution due to heterogeneity. However, we observed variable results of the effects of these vitamins on parameters indicative of bone formation depending on the type of cells used, which calls into question the use of particular cell lines and animal models to test drugs/supplements as a precursor to clinical studies.

Although there have been widespread publications on the effect of vitamin D, K1 and K2 supplementation on bone formation, a definite conclusion concerning their effect in vitro on cell lines or primary cells has yet to be made. We found through performing meta-analyses of the previous literature that the addition of vitamin K1, K2 or D, as well as the addition of K2+1,25D, to osteoblasts increased bone mineralization, but did not consistently change all of the osteoblast maturation parameters that are associated with bone formation. When the experiments were grouped by cell type, it was revealed that vitamin K2 or D supplementation had variable effects on bone cell parameters within cultures of different cell types. Ultimately, this work indicates that the conditions in which bone formation is studied must be considered carefully to determine the effect of vitamin K;, vitamin K2 and vitamin D supplementation on osteoblasts in vitro. In addition, meta-analysis is an extremely useful tool that has yet to be fully utilized in the field of cell biology.

Bone formation in the lab is aided by Vitamin D, Vitamin K1, and Vitamin K2 – meta-analysis Nov 2017         Printer Friendly PDF this page! Follow this page for updates
This page is in the following categories (# of items in each category)
Bone - Health 295 Meta-analysis of Vitamin D 582 Vitamin D and Vitamin K 141