Considering testing all AS patients for low Vitamin D - Jan 2017 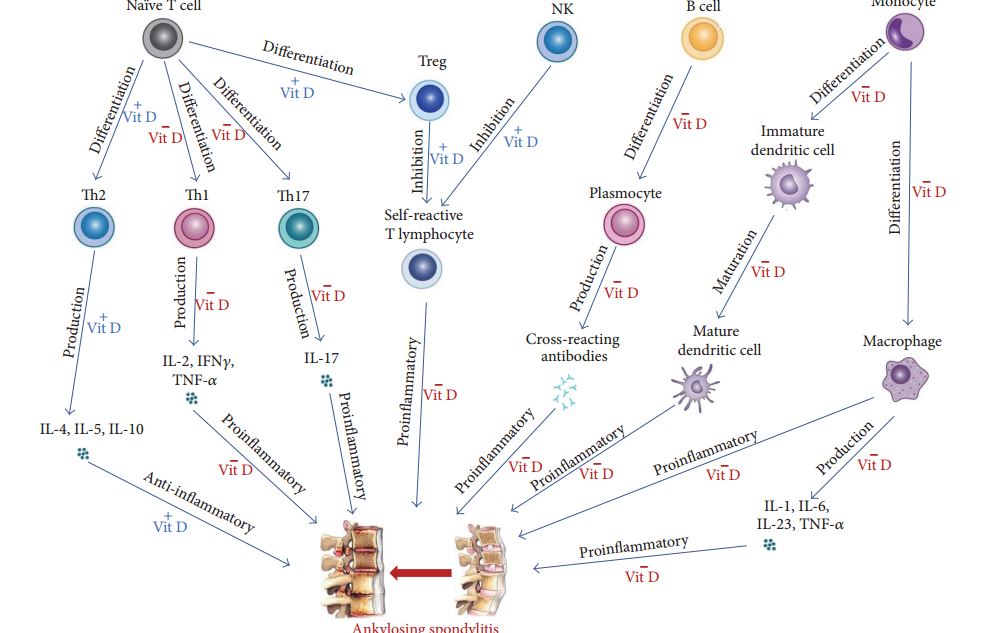 Beyond its role in calcium and phosphorus metabolism for healthy bone mineralization, there is increasing awareness for vitamin D contribution in modulation of immune reactions. Given that ankylosing spondylitis (AS) is a chronic inflammatory disease involving excess immune/inflammatory activity and posing great therapeutic challenges, it is conceivable to claim that vitamin D treatment may be a safe and effective treatment to influence or modify the primary disease and its related comorbidities. Nevertheless, consistent body of research supporting this hypothesis is still lacking. In this paper, we examine whether systematic screening and treatment for vitamin D deficiency are feasible at present. We will review the immunomodulatory role of vitamin D and its contribution in initiation and progression of AS, as well as how they would determine the occurrence of comorbid conditions. Our conclusion is that despite the overwhelmed interest about vitamin D treatment in AS patients, systematic screening and treatment for vitamin D deficiency of all AS patients are not feasible as yet. This stresses the need for further extensive well-designed research to prove vitamin D efficacy in AS beyond bone protection. And if utility is proven, personalized treatment regimes, duration of treatment, and threshold values for vitamin D should be provided.
&nbspDownload the PDF from VitaminDWiki

Objectives: Was to assess the frequency of hypovitaminosis D in patients with ankylosing spondylitis (AS) compared to healthy controls and to evaluate its association with disease activity, structural damage and bone mineral density (BMD).

Methods: Serum 25(OH) D in 30 AS male patients was compared to 30 matched healthy controls. AS disease activity was assessed using AS Disease Activity Score and C - reactive protein (ASDAS-CRP). Bath AS Functional Index (BASFI) and Bath AS Metrology Index (BASMI) were used to assess the functional impairment and the spinal mobility respectively. Radiological damage was scored according to modified Stoke AS Spine Score (mSASSS) and BMD was measured in the lumbar spine and femoral neck.

Conclusions: hypovitaminosis D is prevalent among AS patients and is associated with increased risk of active disease, impaired function, radiographic severity and bone mineral loss. Future studies with larger sample size are recommended to assess the impact of vitamin D deficiency on radiological progression in AS and to address whether or not vitamin D supplementation will help control active disease.

Males with Ankylosing Spondylitis having <10ng of vitamin D had a 2.2 X higher risk of dying - May 2020

In this study, we aimed to examine the effect of vitamin D deficiency on all-cause mortality in ankylosing spondylitis (AS) patients and in the general population. This is a retrospective-cohort study based on the electronic database of the largest health-maintenance organization in Israel. AS patients who were first diagnosed between 2002-2007 were included. Controls were matched by age, gender and enrollment-time. Follow-up continued until death or end of study follow-up on 1 July 2019. Laboratory measures of serum 25-hydroxyvitamin-D levels during the entire follow-up period were obtained. A total of 919 AS patients and 4519 controls with a mean time of follow-up of 14.3 years were included. The mean age at the time of enrollment was 52 years, and 22% of them were females.
AS was associated with a higher proportion of vitamin D deficiency (odds ratio 1.27 [95% confidence-interval (CI) 1.03-1.58]). In AS patients, insufficient levels of vitamin D (< 30 ng/mL) were significantly associated with increased incidence of all-cause mortality (hazard ratio (HR) 1.59 [95% CI 1.02-2.50]).
This association was more prominent with the decrease in vitamin D levels (

However, inadequate levels of vitamin D among controls were not associated with an increased all-cause mortality. Our study has shown that vitamin D deficiency is more common in AS patients than controls and is linked to an increased risk for all-cause mortality. These results emphasize the need for randomized-controlled trials to evaluate the benefits of vitamin D supplementation as a secondary prevention of mortality in patients with chronic inflammatory rheumatic disease.
&nbspDownload the PDF from VitaminDWiki

OBJECTIVE: Ankylosing Spondylitis (AS) is an inflammatory rheumatic disease that mainly affects the axial spine. Osteopenia and osteoporosis are the main complications of AS. Vitamin D has functions on the immune system. In this study, we aimed to compare vitamin D levels and Bone Mineral Density (BMD) values between AS patients and controls.

METHODS: A total of 68 patients with axial AS and 34 healthy controls were enrolled in this study conducted between March 2018 and May 2018. Vitamin D concentrations, BMD values, disease activity, back mobility, functionality and radiologic damage were evaluated.

CONCLUSION: Our study demonstrates that AS patients have lower vitamin D levels, total BMD-femur and BMD-femur neck values. Higher disease activity increases bone loss in AS. Regular measurement of BMD and vitamin D should be kept in mind when planning a treatment in AS.
&nbspDownload the PDF from VitaminDWiki

BACKGROUND:
The role of vitamin D in ankylosing spondylitis (AS) is largely unknown, this paper aims to examine the association between serum vitamin D levels and susceptibility and disease activity of AS.
METHODS:
We searched the relevant literatures in PubMed, Elsevier Science Direct, Chinese Biomedical Database (CBM), Chinese National Knowledge Infrastructure (CNKI) and Wanfang (Chinese) Database published before June 2014. Eight independent case-control studies with a total of 533 AS patients and 478 matching controls were selected into this meta-analysis. Standard mean differences (SMDs) with 95% confidence intervals (CIs) were used to assess the levels of serum vitamin D, parathyroid hormone (PTH), serum calcium and alkaline phosphatase (ALP) in cases and controls, respectively. Correlation coefficients (COR) have been performed to value the correlationship between vitamin D and disease activity (erythrocyte sedimentation rate (ESR) and C-reactive protein (CRP) and Bath Ankylosing Spondylitis Disease Activity Index (BASDAI)) of AS patients.
RESULTS:
Meta-analyses results suggested that vitamin D may play a protective role in AS. (For total vitamin D: SMD=-0.71, P<0.001; for 25OHD: SMD=-0.66, P=0.002; for 1,25OHD: SMD=-0.72, P=0.19). Differences in PTH and serum calcium levels were not significant in AS (SMD=-0.10, P=0.67; SMD=0.12, P=0.17 respectively), while ALP was associated with AS susceptibility (SMD=0.20, P=0.04).

Relationship between serum vitamin D levels and disease activity were statistically significant except for 25OHD versus (vs.) CRP or BASDAI (for CRP vs. 25OHD: COR=-0.22, P=0.08; for BASDAI vs. 25OHD: COR=-0.20, P=0.06, respectively).
CONCLUSION:
The higher levels of serum vitamin D were associated with a decreased risk of AS, and showed an inverse relationship with AS activity.

METHODS: This is an ancillary study of the ASAS-COMOSPA study initiative, an international cross-sectional study of patients with SpA. Demographics, patients' phenotype, disease activity/severity measures and comorbidities were assessed. Serum 25-hydroxyvitamin D (25OHD) deficiency was defined as <20 ng/mL (<50 nmol/L).

CONCLUSIONS: This study suggests that vitamin D deficiency is common in SpA worldwide and is associated with season but also with more severe forms of SpA.

Objective The aim of the present study was to evaluate the plasma vitamin D (vit D) levels and their association with the disease activity in patients with ankylosing spondylitis (AS) and undifferentiated spondyloarthritis (uSpA) compared with healthy populations. Methods This study included 161 spondyloarthritis patients (113 uSpA patients and 48 AS patients) attending our rheumatology out-patient clinic, along with 92 controls.

Objectives. Vitamin D appears to have significant effects on both innate and acquired immunity and deficiency may be associated with both susceptibility and disease severity in some autoimmune conditions. There has been little focus on the potential immunomodulatory role of vitamin D in AS. This study systematically reviews the evidence for an association between vitamin D deficiency and disease susceptibility and severity in AS.

Methods. A systematic review was conducted using Medline, EMBASE, Web of Science and conference abstracts of the European League Against Rheumatism (2002–13), British Society for Rheumatology (1993–2013) and ACR (2006–13).

Results. Fifteen original articles and five conference abstracts met the criteria for inclusion. All were cross-sectional in design. Seven of 11 studies identified lower concentrations of 25-hydroxyvitamin D (25OHD) in AS patients compared with healthy controls. A significant inverse correlation between 25OHD and disease activity was observed in 5 of 11 studies. The majority of studies that failed to demonstrate significant findings used inappropriate statistical methods.

Conclusion. Cross-sectional studies using appropriate statistical analyses have highlighted that AS is associated with lower vitamin D concentrations. Within groups of AS patients there is some evidence that low vitamin D concentrations are associated with higher disease activity. However, there are insufficient published data to support an immunomodulatory role for vitamin D in AS. Further study with a longitudinal design is required to understand whether optimizing vitamin D in AS has potential as a disease-modifying intervention.

Ankylosing spondylitis (AS) is an inflammatory disorder that presents with arthritis of the axial skeleton, including sacroiliac joints. Vitamin D is a secosteroid hormone with a long-established role in calcium and phosphate homeostasis, and in the regulation of bone formation and resorption. It is now known that vitamin D plays an immunosuppressive role in the body, and there is interest of late in the role of vitamin D in autoimmune diseases. Inflammation may be responsible for some of the loss of bone mineral density seen in AS. We reviewed the literature for studies assessing vitamin D level as a marker of AS disease activity and those examining vitamin D levels in AS in comparison to healthy controls. Four of 7 studies found a significant negative correlation between vitamin D levels ALD 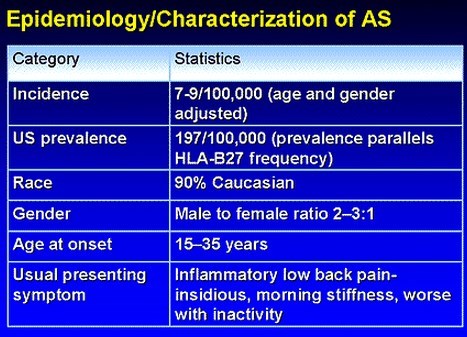 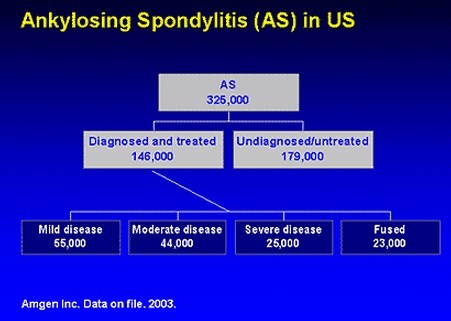 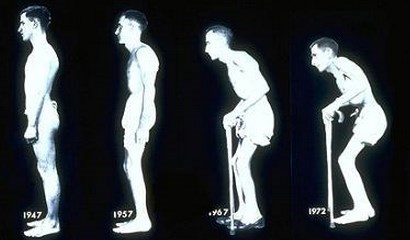 Ankylosing spondylitis and low vitamin D – several studies         Printer Friendly PDF this page! Follow this page for updates
This page is in the following categories (# of items in each category)
Bone - Health 288 Autoimmune 182