Vitamin K acts as a cofactor for the endoplasmic enzyme y-glutamyl carboxylase, during post-translational conversion of glutamic acid residues to y-carboxyglutamic acid (Gla) in specific proteins. These proteins are referred to as vitamin K-dependent proteins, and include several blood coagulation factors and anti-coagulation factors, which are synthesized in the liver; Osteocalcin(OC), a bone-specific protein synthesized by osteoblasts; and Matrix Gla Protein (MGP), which is synthesized in several organs. Recently, considerable attention has been directed towards these vitamin K-dependent Gla proteins; their role in bone metabolism; and their inhibitory effect on artery calcification. The current average intake of vitamin K from a normal diet in healthy adults is greater than that required for normal blood coagulation, but is insufficient for extra hepatic tissue requirements [1,2].
Vitamin K2 has been found to be highly effective in bone metabolism compared to vitamin K1.
In Japan, a high dose of vitamin K2 (45 mg/day), as menaquinone-4 (MK-4), is used as therapeutic treatment for osteoporosis. The principle effect of vitamin K2 on osteoporosis is prevention of bone fracture by improving bone quality, and not increasing bone mineral density. Recently, attention has been directed towards another vitamin K2 homolog; menaquinone-7 (MK- 7) extracted from Bacillus subtilis natto. This has been found to be highly effective in carboxylation of osteocalcin at nutritional doses. This review focuses on the effects of vitamin K2 as MK-7 on bone quality.

Structure of Vitamin K and its Distribution in Foods

There are two naturally occurring forms of vitamin K: vitamin K1 (phylloquinone), derived from green plants; and vitamin K2 (menaquinones, MK-n), which are a series of vitamers with multi-isoprene units at position 3 of the common 2-methyl-1,4- naphthoquinone ring structure.
In food, vitamin K1 is bound to the chloroplast membrane of leafy green vegetables; whereas, MK-4 is found in animal products, such as eggs, meat, and liver. MK-4 is derived from menadione (a synthetic analog of vitamin K, consisting only of the 2-methyl-1,4- naphthoquinone ring structure), which is given to animals as a feed additive nutrient and converted to MK-4 in animal tissues. Long chain menaquinones (e.g., MK-7, MK-8, and MK-9) are found in fermented foods such as cheese, curd, and sauerkraut [3]. The Japanese fermented food “natto” contains MK-7 at an exceptionally high concentration [3]. Vitamin K1, MK-4, and MK-7 are currently used as nutritional supplements and by the food industry (Figure 1).

OC is produced by osteoblasts and forms bone matrix. Fully- carboxylated OC binds to calcium and shows affinity for hydroxyl apatite in bone [4]. The exact function of OC in bone is unclear, but is thought to be involved in calcium modulation. The first study using OC-knockout mice found that bone formation was accelerated in the knockout mice [5]; in contrast, bone structure turned fragile in OC- knockout mice after ovariectomy treatment [6]. This suggested that OC is important for bone maturation and bone quality.
OC has been used as a biomarker for bone metabolism: deficiency in vitamin K, elevates serum undercarboxylated OC (ucOC) levels; and high serum ucOC has been associated with hip fracture [7,8], and has been recognized as independent risk factor of fracture. In Japan, serum ucOC has been used as diagnostic marker to evaluate vitamin K deficiency in bone, since 2007.

Murasawa et al. [9] conducted a study on ovariectomized rats fed with MK-7 (30 mg/kg bw per day) for 5 months. They observed a significant reduction in the bone mineral density of femurs in ovariectomized rats compared to sham-operated rats. MK-7 was modestly protective against this decrease (Figure 2); but markedly improved bone strength. Therefore, the benefits of MK-7 on bone strength were thought to be by maintaining and improving bone quality, and not by increasing bone mineral density.
A clinical study on post-menopausal women treated with MK-4 (45 mg/day) for 3 years, exhibited no effect on bone mineral density; in contrast, its effects on the maintenance of bone mass and bone quality indices of the femur were significant over the 3 year period [10]. Other intervention studies on vitamin K1 (5 mg/day; duration: 2 or 4 years) also found that vitamin K1 had no effect on bone mineral density, but significantly decreased the fracture rates [11].
Another possible mechanism by which vitamin K maintains and improves bone quality has been suggested. In addition to carboxylation and activation of OC, MK-4 may also increase collagen accumulation [12]. We confirmed this finding by showing that MK-7 increased collagen production through osteoblastic cells (Figure 3). Collagen occupies more than half the volume of bone and makes the foundations on which calcium and other minerals accumulate; and collagen accumulation contributes to bone flexibility and elasticity. Therefore, along with calcium and other minerals, collagen accumulation is critically important for high quality bone formation.
MK-7 has been reported to activate bone formation by osteoblastic cells [13], and suppress bone resorption [14]. The mechanism was recently demonstrated, and showed that MK-7 stimulates osteoblastogenesis and suppresses osteoclastogenesis by inhibiting NF- kB activation [15].
In addition to OC, many vitamin K-dependent proteins, such as MGP; protein S [16]; and periostin [17], are contained within the bone matrix; therefore, vitamin K-dependent proteins are thought to have, unknown functions in bone until now.
Observational studies of vitamin K intake and many observational studies on the relationship between bone metabolism, bone fracture, and vitamin K intake have been reported: MK-7 intakes from natto were inversely associated with bone fracture rates in Japan [18,19]; high serum ucOC was associated with hip fracture [7,8]; and serum vitamin K levels were inversely associated with hip fracture rates [20]. Furthermore, serum vitamin K levels and ucOC levels were inversely associated [21]. These findings clearly showed the close correlation between carboxylation of OC by vitamin K and fracture rates. Therefore, it is believed that an increased nutritional intake of vitamin K could reduce the risk of osteoporosis.

It is widely recognized that increasing peak bone mass before 20-30 years of age is very important for the prevention of osteoporosis, since bone mass gradually decreases with age. However, decreasing bone mass in children has been reported [22]. Bone metabolism is highly active in children, serum OC and ucOC levels are also extremely high compared to adults [23]. Furthermore, serum ucOC levels in children and bone health indices are inversely correlated [24,25]; and 45 pg of MK-7 has been shown to activate OC in children [26]. Therefore, it is expected that a sufficient intake of vitamin K may contribute children’s bone health.

Ectopic artery calcification is frequently accompanied by osteoporosis in patients. This contradictory association is known as the “Calcium Paradox” or “Calcification Paradox” [27]. Vascular calcification is associated with increased cardiovascular mortality and morbidity [28,29], and is recognized as an independent risk factor for cardiovascular death [30]. A vitamin K-dependent protein, MGP, is a strong inhibitor of vascular calcification [31,32], and an intake of vitamin K, sufficient to fully activate MGP, is thought to prevent ectopic artery calcification. Two large epidemiological studies have shown inverse associations between vitamin K2 intake and cardiovascular death and/or disease [33,34]. Long chain vitamin K2 such as MK-7 mainly contributed to the result, while vitamin K1 showed no associations. Another study has also shown an inverse relationship between vitamin K2 intake and artery calcification [35]. The difference between vitamin K1 and K2 are due to differences in their bioavailability and cofactor activity. Recently, nutritional intake of MK-7 has been found to activate MGP [36,37]. Thus, it is expected that MK-7 may have therapeutic functions that contribute to both artery health and bone metabolism, and may solve the symptoms of “Calcium Paradox” [27].
Recent studies indicated that calcium supplements may increase cardiovascular rates [38,39]; it was concluded that this potentially detrimental effect on cardiovascular health needs to be balanced against the probable benefits of calcium on bone health [38]. It is widely recognized that calcium alone is not sufficient for bone health; therefore, other minerals, such as magnesium and vitamin D, are normally added. Vitamin K, through two vitamin K-dependent proteins; OC and MGP, has an essential role in modulating calcium homeostasis. As such, vitamin K2 should be recommended as an addition to calcium supplements.

The effect of long chain vitamin K2, such as MK-7, on normal blood coagulation in rats was found to be higher and long lasting, than vitamin K1 and MK-4 [40,41]. A human study demonstrated that MK-7 derived from natto has a very long half-life time in the serum, and induced more complete carboxylation of OC compared to vitamin K1 [2]. It was also demonstrated that a high dose of MK-4 has a very short-half life in humans [42]. Our study found that a nutritional dose of MK-4 (420 |rg) was not absorbed; whereas, MK-7 was absorbed well in healthy women (Figure 4) [43]. The minimum dose of 1500 qg/day of MK-4 is required to activate OC in healthy subjects [44]; in contrast, 45-150 qg MK-7 was able to activate OC in healthy subjects [2,26,45]. 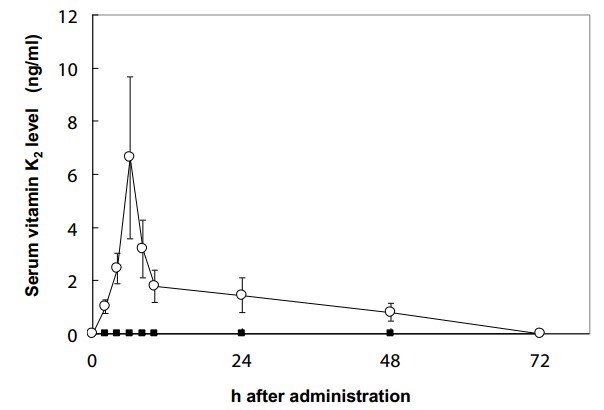 Because all vitamin K homologs are converted to MK-4 in organs, MK-4 has been thought to have specific functions, other than y-carboxylation of vitamin K-dependent proteins [46,47]. However, our previous rat study [48] found that an adequate nutritional intake of MK-4 did not increase the MK-4 levels in extrahepatic organs; whereas, MK-7 increased MK-4 significantly in organs, such as the femur, brain, testis, kidney, and pancreas, indicating that MK-7 is better than MK-4 as an MK-4 precursor in vivo (Figure 5). 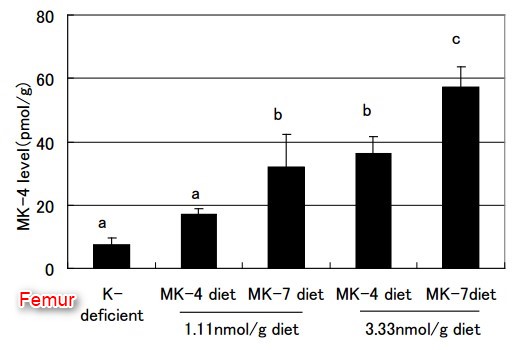 MK-4 appears to be the logical choice for the pharmacological use of vitamin K (at high dose; 45 mg/day) for the treatment for osteoporosis. The long half-life and better bioavailability of MK-7 would mean that a regular intake of physiological or nutritional doses of MK-7 (50-150 pg/day) would lead to the accumulation of vitamin K2 in extrahepatic tissues, at levels that could only be achieved by MK-4 at much higher doses.

The principle effects of vitamin K on bone health are to maintain and promote bone quality, and not to increase bone mineral density. Possibly the mechanisms may be activating osteocalcin, increasing collagen matrix, and regulating differentiation of osteoblasts and osteoclasts. Among the vitamin K homologs, MK-7 shows highest activity and bioavailability in humans. Therefore, it is believed that MK-7 at nutritional doses will promote bone health. A larger intervention trial for MK-7 is justified.

Vitamin K2 (as MK-7) is needed for bone quality – Review Feb 2013         Printer Friendly PDF this page! Follow this page for updates
This page is in the following categories (# of items in each category)
Bone - Health 289 Vitamin D and Vitamin K 139