Synergistic effect of low K and D vitamin status on arterial stiffness in a general population.


Both vitamins K and D are nutrients with pleiotropic functions in human tissues. The metabolic role of these vitamins overlaps considerably in calcium homeostasis. We analyzed their potential synergetic effect on arterial stiffness. In a cross-sectional study, we analyzed aortic pulse wave velocity (aPWV) in 1023 subjects from the Czech post-MONICA study. Desphospho-uncarboxylated matrix γ-carboxyglutamate protein (dp-ucMGP), a biomarker of vitamin K status, was measured by sandwich ELISA and 25-hydroxyvitamin D3 (25-OH-D3) by a commercial immunochemical assay. In a subsample of 431 subjects without chronic disease or pharmacotherapy, we detected rs2228570 polymorphism for the vitamin D receptor.

When we compared these extreme groups of vitamin K and D status, the adjusted odds ratio for aPWV≥9.3 m/s was 6.83 (95% CI:1.95-20.9). The aPWV was also significantly higher among subjects bearing the GG genotype of rs2228570, but only in those with a concomitantly poor vitamin K status. In conclusion, we confirmed substantial interaction of insufficient K and D vitamin status in terms of increased aortic stiffness. 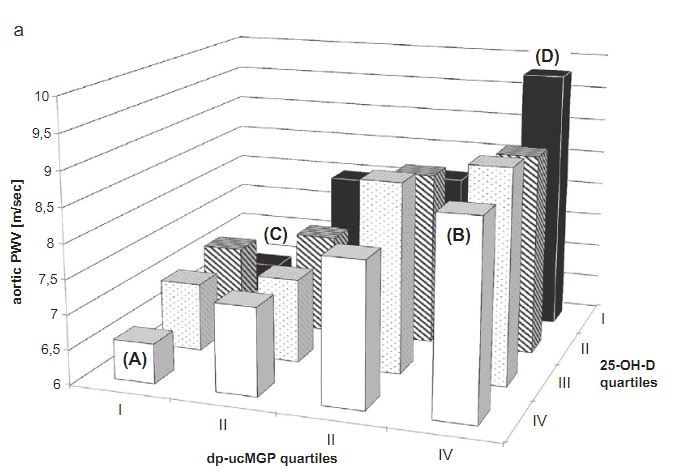 Fast blood flow 6.8 X more likely if high vitamin D AND high vitamin K – Aug 2017         Printer Friendly PDF this page! Follow this page for updates
This page is in the following categories (# of items in each category)
Cardiovascular 459 Vitamin D and Vitamin K 139