A review of the effect of diet on cardiovascular calcification.

Cardiovascular (CV) calcification is known as sub-clinical atherosclerosis and is recognised as a predictor of CV events and mortality. As yet there is no treatment for CV calcification and conventional CV risk factors are not consistently correlated, leaving clinicians uncertain as to optimum management for these patients. For this reason, a review of studies investigating diet and serum levels of macro- and micronutrients was carried out. Although there were few human studies of macronutrients, nevertheless transfats and simple sugars should be avoided, while long chain ω-3 fats from oily fish may be protective. Among the micronutrients, an intake of 800 μg/day calcium was beneficial in those without renal disease or hyperparathyroidism, while
inorganic phosphorus from food preservatives and colas may induce calcification. A high intake of magnesium (≥380 mg/day) and phylloquinone (500 μg/day) proved protective, as did a serum 25(OH)D concentration of ≥75 nmol/L. Although oxidative damage appears to be a cause of CV calcification, the antioxidant vitamins proved to be largely ineffective, while supplementation of α-tocopherol may induce calcification.
Nevertheless other antioxidant compounds

were protective. Finally, a homocysteine concentration >12 µmol/L was predictive of CV calcification, although a plasma folate concentration of >39.4 nmol/L could both lower homocysteine and protect against calcification. In terms of a dietary programme, these recommendations indicate avoiding sugar and the transfats and preservatives found in processed foods and drinks and adopting a diet high in oily fish and vegetables. The micronutrients magnesium and vitamin K may be worthy of further investigation as a treatment option for CV calcification. 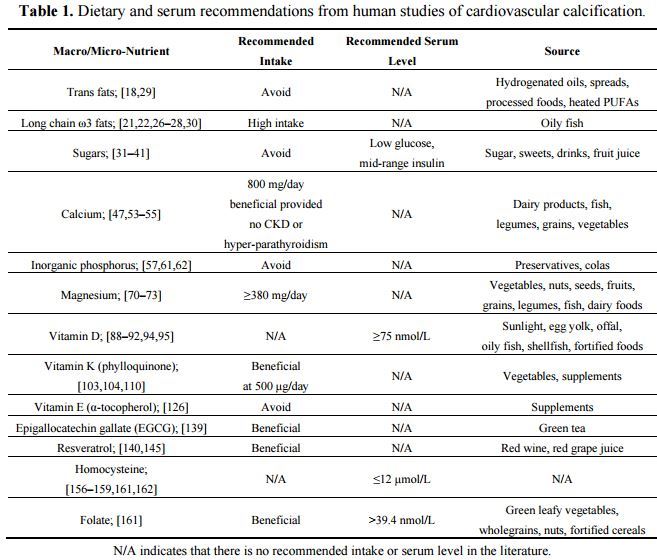