Intake of vitamin K1 and K2 and risk of hip fractures: The Hordaland Health Study

Background
Evidence of the effect of vitamin K on bone health is conflicting.
The aim was to investigate the association between intake of vitamins K1 and K2 and subsequent risk of hip fracture in a general population sample, as well as potential effect modification by apolipoprotein E gene (APOE) status by presence of the E4 allele.

Methods
1569 men and 1238 women 71–75 years of age were included in the community-based Hordaland Health Study 1997–1999 in Western Norway. Information on hip fracture was obtained from hospitalizations in the region from enrolment until 31 December 2009. Information on intake of vitamins K1 and K2 collected at baseline was used as potential predictors of hip fracture in Cox proportional hazards regression analyses.

Conclusions
A low intake of vitamin K1, but not K2, was associated with an increased risk of hip fractures. 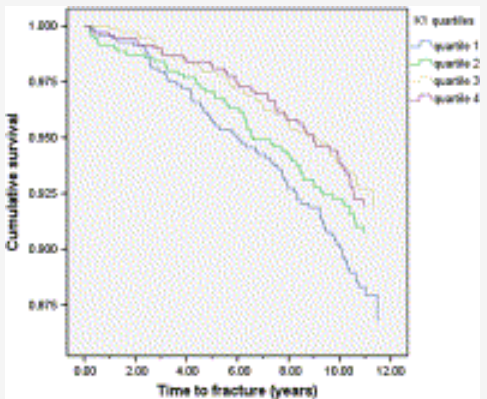 Vitamin K1 reduced hip fracture but Vitamin K2 did not – Aug 2011         Printer Friendly PDF this page! Follow this page for updates
This page is in the following categories (# of items in each category)
Bone - Health 289 Vitamin D and Vitamin K 139