Vitamin K Supplementation for the Prevention of Cardiovascular Disease: Where Is the Evidence? A Systematic Review of Controlled Trials

By ignoring the amount and type of Vitamin K given by a trial no benefit was found
Trials which give enough of the right type did find a benefit
Note: May need even larger amounts if
You are taking a lot of Vitamin D
You are obese

Items in both categories Cardiovascular and Vitamin K:


&nbspDownload the PDF from VitaminDWiki
Tables clipped and trimmed from PDF 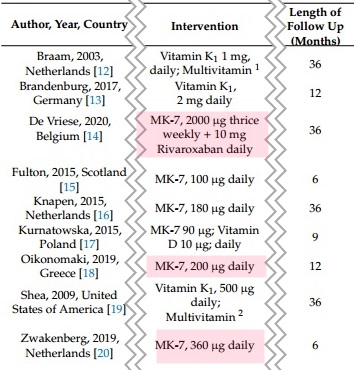 Matrix gla protein (MGP) is an important vitamin K-dependent inhibitor of vascular calcification. High levels of uncarboxylated, dephosphorylated MGP have been associated with vascular calcification and are responsive to vitamin K treatment. In this systematic review, we summarize the available evidence examining whether vitamin K supplementation improves surrogate measures of cardiovascular disease including artery and valve calcification, atherosclerosis and artery stiffening. Data from controlled trials of adults were obtained by searching Ovid MEDLINE, Embase, the Cochrane Central Register of Controlled Trials and the Web of Science Core Collection. We identified nine randomized controlled trials for review, including trials of vitamin K1 or vitamin K2 supplementation, that assessed a surrogate measure of cardiovascular disease including arterial calcification, atherosclerosis or arterial stiffening. For each trial, the risk of bias was assessed applying Cochrane Collaboration methodology. The findings indicate that vitamin K does not consistently prevent progression of calcification, atherosclerosis or arterial stiffness. There may be some benefit in people with calcification at study entry. Studies were heterogenous, with relatively short follow-up and outcome measures were varied. While vitamin K supplementation clearly improves the carboxylation of dephosphoylated MGP, its role in mitigating vascular calcification is uncertain, based on current evidence.