Items in both categories Pregnancy and Omega-3 are listed here: 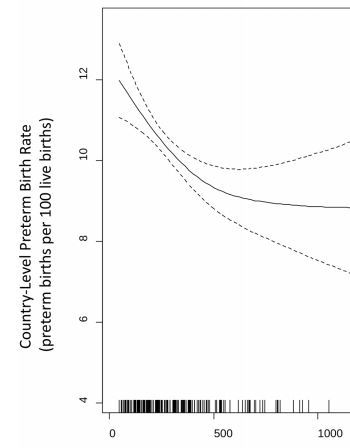 Map of Omega-3 consumption by countries 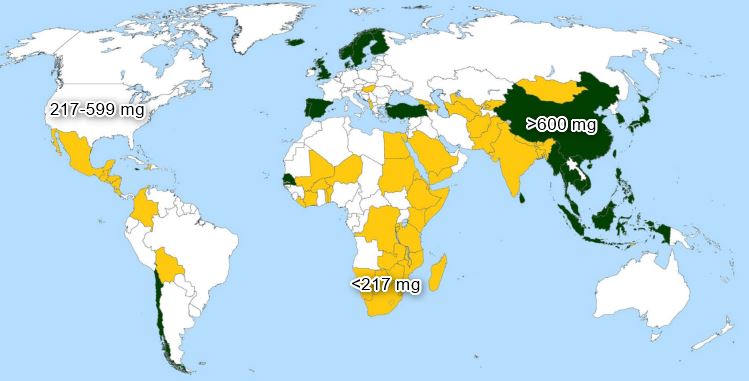 Background The preponderance of evidence now indicates that elevated long-chain omega-3 polyunsaturated fatty acid (LC omega-3 PUFA) intake is often associated with reduced risk of preterm birth (PTB). This conclusion is based on recent meta-analyses that include several studies that reported null findings. We probed the reasons for this heterogeneity across studies and its implications for PTB prevention using country-level data.

Methods We analysed the relationship between national PTB rates (<37 weeks of gestation) and omega-3 PUFA intake norms from 184 countries for the year 2010. To estimate the total LC omega-3 PUFA levels (eicosapentaenoic acid [EPA]/docosahexaenoic acid [DHA]) that these norms produce we utilised a metric that accounts for

We then assessed the shape of the omega-3–PTB relationship with a penalised spline and conducted linear regression analyses within the linear sections of the relationship.

Results Penalised spline analyses indicated that PTB rates decrease linearly with increasing omega-3 levels up to ~600 mg/day. Income-adjusted linear regression analysis among the countries in this exposure range indicated that the number of PTBs per 100 live births decreases by 1.5 (95% CI 2.8 to 0.3) for each 1 SD increase in omega-3 intake norms (383 mg/day).

Conclusions Taken with prior evidence for a causal association on the individual level, our findings indicate that omega-3 PUFA deficiency may be a widespread contributing factor in PTB risk. Consideration of baseline omega-3 PUFA levels is critical in the design of future interventions.

Preterm Births decreased by Omega-3 (analysis of 184 countries) – April 2019         Printer Friendly PDF this page! Follow this page for updates
This page is in the following categories (# of items in each category)
Pregnancy 793 Top news 870 Vitamin D and Omega-3 354