Items in both categories Cancer and Genes are listed here:

Items in both categories Cancer and Vitamin D Receptor are listed here:

Items in both categories Breast Cancer and Genes are listed here:

Items in both categories Breast Cancer and Vitamin D Receptor are listed here:

Items in both categories Colon Cancer and Genes are listed here:

Items in both categories Colon Cancer and Vitamin D Receptor are listed here:

Items in both categories Lung Cancer and Genes are listed here:

Items in both categories Lung Cancer and Vitamin D Receptor are listed here:

Items in both categories Pancreatic Cancer and Genes are listed here:

Items in both categories Pancreatic Cancer and Vitamin D Receptor are listed here:

Items in both categories Prostate Cancer and Genes are listed here:

Items in both categories Prostate Cancer and Vitamin D Receptor are listed here: 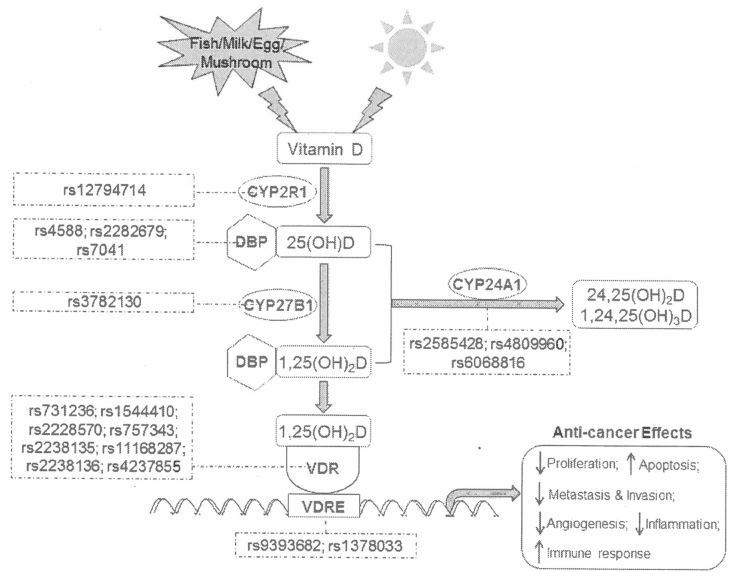 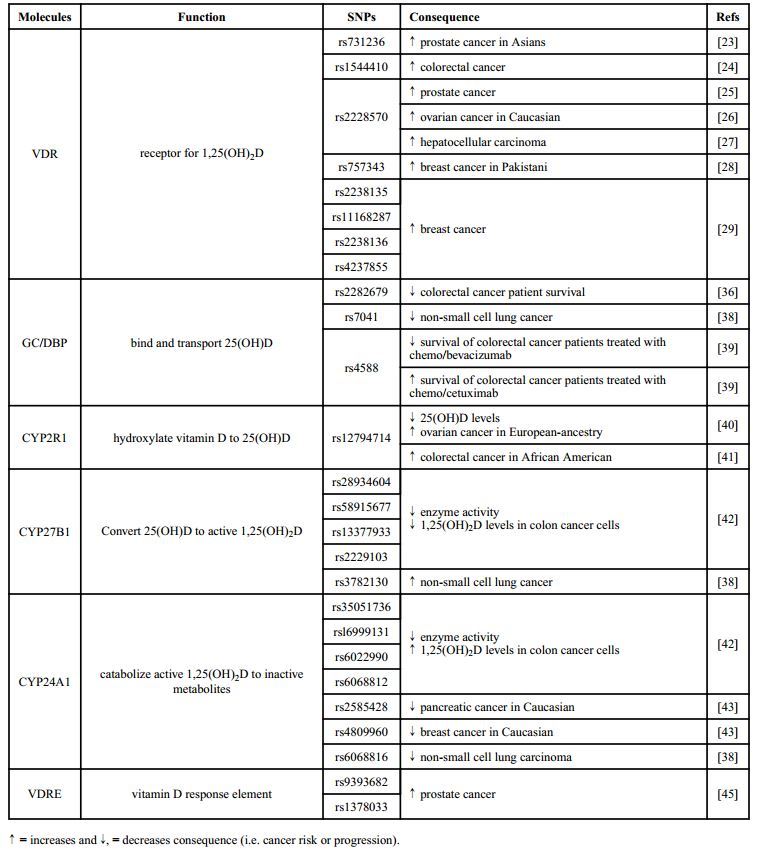 The association between vitamin D and cancer has long been studied, but the results have been variable. Thus, there does not seem to be a consensus on whether vitamin D has a beneficial anticancer effect. This review not only summarizes the association between vitamin D and cancer risk and results of clinical trials involving vitamin D, but explores some of the reasons that contribute to the variability of study outcomes. Highlighted are single nucleotide polymorphisms (SNPs) that contribute to variability in the efficacy of vitamin D supplementation. Understanding these differences can personalize approaches to optimize the effectiveness of vitamin D in limiting cancer risk.

Multiple studies have assessed whether vitamin D can prevent cancer or if it can improve cancer treatment outcomes. This includes original studies and meta-analyses. Most studies on its preventive roles have correlated plasma levels of the vitamin D metabolites with cancer risk. Typically, 25(OH)D, the stable metabolite of vitamin D in the circulation, is measured and subjects are considered as vitamin D sufficient (30-100 ng/ml), insufficient (21-29 ng/ml) or deficient (<20 ng/ml). Below is a summary of studies demonstrating beneficial effects of vitamin D supplementation as well as studies showing the absence of vitamin D effects.

Many, although not all, studies that associate vitamin D levels with cancer risk measure serum levels of 25(OH)D to determine if the subjects are deficient. For example, a greater proportion of melanoma patients had deficient or insufficient levels of 25(OH)D than healthy controls [1]. Similarly, vitamin D levels were lower in patients with thyroid cancer compared to matched controls [2]. Women with breast cancer that were deficient in 25(OH)D had larger tumors, more advanced stage and reduced survival than those that were not deficient [3]. For glioblastoma, serum 25(OH)D was inversely associated with risk, although there was no association for non-glioblastoma glioma [4]. Using annual ambient ultraviolet B exposure as a surrogate for vitamin D levels, an inverse association with risk for esophageal and gastric cancers has been reported [5]. In a prospective Japanese population study with a 15 year follow-up, the incidence of liver and pre-menopausal breast cancers was greater in subjects with lower 25(OH)D levels at the study onset [6].
Vitamin D can also indirectly prevent cancer. Patients that failed treatment to eradicate Helicobacter pylori, which is associated with gastric cancer, had a higher prevalence of 25(OH)D deficiency than those that were successfully treated [7]. Indirect anti-cancer effects of vitamin D can also be due to its anti-inflammatory properties. Men with prostate cancer had reduced 25(OH)D and increased inflammatory mediator levels compared to controls [8]. Similarly, inflammatory mediators were increased in colorectal cancer patients that had lower levels of 25(OH)D [9].
Several meta-analyses have assessed the relationship between circulating 25(OH)D levels and cancer risk, with meta-analyses being able to assemble larger datasets than can individual studies. One such analysis of 25 prospective and retrospective studies associated reduced pancreatic cancer risk with increased vitamin D consumption [10]. An analysis of 17 prospective studies linked reduced 25(OH)D levels with increased lung cancer risk, although overall survival was not associated with 25(OH)D levels [11]. A combined case- control study and meta-analysis inversely correlated 25(OH)D levels and papillary thyroid cancer risk [12]. Finally, a meta-analysis of 22 studies showed reduced lung cancer risk and improved lung cancer patient survival when serum 25(OH)D levels were increased [13].
Fewer studies have examined links between vitamin D levels and lymphoproliferative diseases, although the active metabolite has been shown in vitro to stimulate differentiation of human leukemia HL-60 cells into monocytic cells [14]. A study of patients with lymphoid malignancies showed those with severe 25(OH)D deficiency had a shorter time to cancer progression [15]. Patients with newly diagnosed acute myeloid leukemia were typically 25(OH)D deficient (<20 ng/ml) [16]. However, those with 25(OH)D levels >20 ng/ml had a reduced length of hospitalization and higher complete remission rates following induction chemotherapy.

Not all studies have shown beneficial effects of vitamin D. An epidemiological survey with a 7 year follow-up showed no association between 25(OH)D levels and cancers development [17]. Similarly, there was no beneficial effect of higher circulating vitamin D levels and pancreatic cancer risk in a large European prospective study [18]. An analysis of 20 prospective cohort studies involving over 5,000 case-control subjects found no association between 25(OH)D levels and lung cancer risk [19]. Similar results were found in a prospective study of subjects undergoing colonoscopy screening [20]. Neither insufficient nor deficient vitamin D levels were associated with the incidence of adenomatous polyps.
A few studies showed increased cancer risk with increased 25(OH)D levels. A meta-analysis of 19 prospective cohort studies associated increased 25(OH)D levels with an increased prostate cancer risk [21]. Possible reasons for why some studies show beneficial anti-cancer effects of vitamin D while others show no or detrimental effects to cancer risk are discussed toward the end of this review.

Relationship of vitamin D-associated pathways with cancer risk and progression

Chronic inflammation is considered to be protumorigenic such as for cancers of the prostate, lung, liver and esophagus [47-50]. Vitamin D can temper inflammation and, thus, has been examined for efficacy in inflammation-associated disorders [51, 52]. This includes cancer chemoprevention. In a randomized, double-blind placebo-controlled trial involving women with cervical intraepithelial neoplasia grade 1 (CIN1), supplementation with 50,000 lU vitamin D every two weeks for 6 months increased the percentage of women having CIN1 regression [53]. Vitamin D supplementation also reduced markers of inflammation and oxidative stress, suggesting this was a mechanism for the observed regressions of CIN Is and, in turn, reduced progression to cervical cancer. However, there are also conflicting results. A randomized doubleblind study demonstrated no effect of the relatively low dose of 1,000 IU/day vitamin D in preventing recurrent pre-cancerous polyps in subjects whose adenomatous polyps were removed during colonoscopy [54].
The immune-modulatory effects of vitamin D in patients with cancer have also been examined. An analysis of the prostate transcriptome showed that vitamin D supplementation (4,000 IU/day) for 2 months prior to undergoing prostatectomy altered expression of inflammatory genes [55]. This was particularly evident in African Americans, a population with an increased prostate cancer risk and a higher incidence of vitamin D deficiency. In a separate prospective study, these investigators showed that supplementing low-risk prostate cancer patients that were under active surveillance with 4,000 IU/day vitamin D for one year decreased their Gleason scores and reduced the number of positive cores upon repeated biopsy [56]. Immune regulatory activity of vitamin D was also demonstrated in patients with head and neck squamous cell carcinoma (HNSCC). In a randomized prospective study, HNSCC patients receiving l,25(OH)2D for 3 weeks prior to surgical treatment had a significantly longer time to cancer recurrence than patients that were untreated prior to surgery [57, 58]. The l,25(OH)2D treatment diminished circulating levels of immune inhibitory cells while increasing intratumoral levels of immune reactive CD4+ T-cells and mature dendritic cells.
Other anti-tumor mechanisms were demonstrated in breast cancer patients in which high- dose vitamin D supplementation (10,000 IU/day) decreased levels of the CYP24A1 product 27-hydroxycholesterol (27HC), which is an estrogen receptor modulator that supports breast cancer growth [59]. Lower doses of 400 IU/day did not increase serum 25(OH)D levels and did not reduce 27HC levels, indicating that high vitamin D dose levels, but not the low dose, could have breast cancer-inhibitory effects. In a study of patients with aggressive B-cell lymphomas, patients were placed on chemoimmunotherapy along with an aggressive vitamin D loading phase of either one or two weeks of 25,000 IU daily and then a maintenance weekly dose of 25,000 IU [60]. Patients that achieved serum concentrations of >30 ng/ml 25(OH)D had a better event-free survival than those that did not.
Improvement in the quality of life of cancer patients receiving vitamin D supplementation has been documented in several studies. Patients with advanced or unresectable oral cancer had lower serum levels of 25(OH)D than healthy controls, but supplementation with twice daily 1,000 IU vitamin D increased the 25(OH)D levels [61]. These patients had reduced chemoradiation-related toxicities and greater improvement in the quality of life assessments (swallowing, pain and chewing difficulties) than those not receiving vitamin D. While not a tightly controlled study, similar types of results were found with esophageal cancer patients that self-reported to take vitamin D supplementation (200-400 IU daily over one year) following esophagectomy [62]. Despite the low dose of supplementation, patients taking vitamin D reported improved quality of life, including physical function, social functioning, fatigue, and appetite loss. In this study, the vitamin D supplementation also prolonged disease-free survival. In a matched control study of palliative care patients with various cancers, supplementation with 4,000 IU/day vitamin D improved the quality of life, diminished antibiotic use and the amount of opioid (fentanyl) used [63].
Not all studies have shown beneficial effects of vitamin D supplementation with cancer treatment. Vitamin D insufficient patients that were randomized to receive standard chemotherapy alone or also 2,000 IU vitamin D daily for 2 years were followed for almost 4 years [64]. No difference was seen in overall survival or progression-free survival. However, the authors stated that the absence of a vitamin D treatment effect could have been due to poor compliance and this study had no verifications of whether serum 25(OH)D levels were increased as a result of the supplementation.