Items in both categories Prostate Cancer and Vitamin D Receptor are listed here: 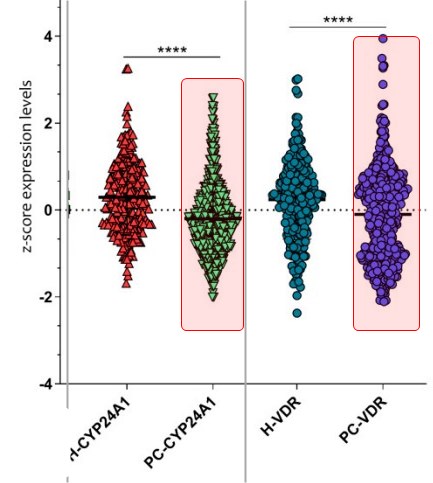 Prostate cancer (PCa) is one of the most common cancers in men. The main risk factors associated with the disease include older age, family history of the disease, smoking, alcohol and race. Vitamin D is a pleiotropic hormone whose low levels are associated with several diseases and a risk of cancer. Here, we undertook microarray analysis in order to identify the genes involved in PCa. We analyzed three PCa microarray datasets, overlapped all genes significantly up-regulated, and subsequently intersected the common genes identified with the down-regulated genes transcriptome of LNCaP cells treated with 1α,25(OH)2D3, in order to identify the common genes involved in PCa and potentially modulated by Vitamin D. The analysis yielded 43 genes potentially involved in PCa and significantly modulated by Vitamin D. Noteworthy, our analysis showed that six genes (PRSS8, SOX4, SMYD2, MCCC2, CCNG2 and CD2AP) were significantly modulated. A Pearson correlation analysis showed that five genes out of six (SOX4 was independent), were statistically correlated with the gene expression levels of KLK3, and with the tumor percentage. From the outcome of our investigation, it is possible to conclude that the genes identified by our analysis are associated with the PCa and are potentially modulated by the Vitamin D.

Prostate Cancer associated with various genes, including Vitamin D Receptor and CYP24A1 – Nov 2019         Printer Friendly PDF this page! Follow this page for updates
This page is in the following categories (# of items in each category)
Cancer - Prostate 95 Genetics 278 Vitamin D Receptor 407