In 1998, the British Medical Journal boldly stated in an editorial headline, "Vitamin D Deficiency: Time for Action."1 The urgency was clear: vitamin D deficiency was going undiagnosed and untreated in large numbers of people. Patients were at risk and suffering needlessly. A simple, extremely low-cost, low-toxicity intervention was readily available. All that was required was vitamin D advocacy.

In the 15 years since then, more than 20 000 articles have appeared in the national Library of Medicine database that correlate vitamin D deficiency with adverse health states, increased morbidity, and even increased mortality across the entire age spectrum and across nearly the entire spectrum of human illness. In fact, this pro-hormone called vitamin D is so important in human health that replenishment of vitamin D deficiency is likely to be the single most cost-effective medical intervention in North America and Europe.

Why then the call for inaction? In 2010, the esteemed Institute of Medicine (IOM) Committee to Review Dietary Reference Intakes for Vitamin D and Calcium made the following three assertions:

To further support the call for clinician inaction, the IOM lowered the internationally established normal value of 25-OH-vitamin D from >= 30 ng/mL to 20 ng/mL.

The report's message was a simple reversal of conventional thought on vitamin D deficiency: time for inaction. And since this 2010 report, payers (both public and private) health systems, and subspecialty societies have affirmed the IOM's call for clinician inaction: Some have requested, or even demanded, that clinicians not assess a patient's vitamin D status. Some have blocked recommendations for vitamin D supplementation above the recommended daily allowance. For example, one large Midwestern obstetrics/gynecol-ogy group wrote to its partners,

‘’the protocol committee met yesterday and, based upon the ACOG [American College of Obstetrics and Gynecology] press release [on the IOM report], effective immediately, we will no longer utilize doses of Vitamin D greater than 1000 IU per day.... Patients that are currently on doses greater than 1000 IU per day should be advised to reduce their dosage or given the option to discontinue replacement entirely. Furthermore, Vitamin D levels will no longer be a part of our prenatal screen" (personal communication, July 21, 2011).’’

For example, the recommendation for a minimum serum level of 20 ng/mL came from one study of 675 cadavers in Germany that compared the serum level of 25-OH-vitamin D at the time of death to bone strength defined as the ratio of unmineralized to total bone mass.3 "Weak bones" were defined as a ratio of 2 or greater. The authors of this cadaver study concluded that 30 ng/mL (75 nmol/L) was the cutoff for vitamin D sufficiency as this level included no subjects with a ratio of 2 or greater. No subject with a serum level greater than 30 ng/mL had weak bones. The IOM disagreed with the authors and defined the cutoff as 20 ng/mL as only seven subjects with levels greater than 20 ng/mL had a bone mineral ratio greater than 2. The IOM committee argued that seven of 675 subjects is inconsequential. Many statisticians disagreed: they argued that the ratio of seven subjects over the denominator of 28 subjects with serum levels between 20 ng/ mL and 30 ng/mL is anything but inconsequential.

This cadaver study had additional problems: it only correlated a one-point-in-time vitamin D measurement, which can vary significantly over time, with bone mineral status that presumably does not vary significantly over time. This is a classic flow/stock mismatch error. The IOM did not address how this correlation study met their definition of evidence when literally thousands of other correlation studies did not.

At the same time, randomized studies already exist that document that optimal bone density is found at levels much greater than 20 ng/mL.4,5 Furthermore, a dozen studies with more than 40 000 participants have demonstrated that the 20 ng/mL level is not enough to prevent either fractures or falls, but higher levels do.6,7 Despite these studies, the IOM stated that there is no convincing evidence that levels higher than 20 ng/mL confer greater benefits.

The IOM also stated that most North Americans "with a few exceptions" meet the minimal goal of a serum level of 20 ng/mL. Who are these exceptions? The most recent Center for Disease Control and Prevention's National Health and Nutrition Evaluation Survey (NHANES) data demonstrates that nearly 30% of black participants had profound vitamin D deficiency with serum levels of less than 10 ng/mL.8 In a study of 10 646 fully insured healthcare employees (>90% white) in the upper Midwest, 30% had levels less than 20 ng/mL and 6% had levels less than 10 ng/mL.9

Although one IOM leader has put in writing that most people in the United States have a baseline level of less than the 20 ng/mL IOM recommendation,10 she continues to urge clinician inaction.11 The recommendation is that clinicians wait until results of the $20 million National Institutes of Health (NIH)-funded VITAL study (the VITamin D and OmegA-3 TriaL: www.vitalstudy.org) are published. In 2017, this study will report on prevention of cancer and cardiovascular disease after 5 years of daily placebo or 2000 IUs of vitamin D supplementation in 20 000 men (aged >60 years) and women (aged >65 years).

Here is one reason for clinician inaction: this NIH study's success requires clinician inaction. Participants must agree to be potentially randomized to placebo vitamin D for 5 years and to limit any additional vitamin D intake to at most 800 IUs per day. For this study to work, participants must not be tempted to increase dosing on their own. Clinicians must not measure and report on vitamin D status. And any clinician vitamin D advocacy and any positive media coverage are potential threats to the study's integrity.

The bottom line is this key question for each reader: Given the well-documented low levels of vitamin D in multiple populations including symptomatic patients and people at risk, and given vitamin D's low cost, low toxicity, and broad biological activity in every tissue as a pro-hormone, is it time for action or inaction?

Have too many clinicians answered with inaction?

As one wise mentor taught me, "Don't get mad . . . get data!" My advice: conduct "n of 1" clinical trials in your patients. Measure vitamin D status, replenish to at least 30 ng/mL, document any clinical improvement, and share the results with colleagues. Consider what role vitamin D status has on other interventions from acupuncture to Xeloda. We at Global Advances in Health and Medicine invite you to submit your compelling case studies. 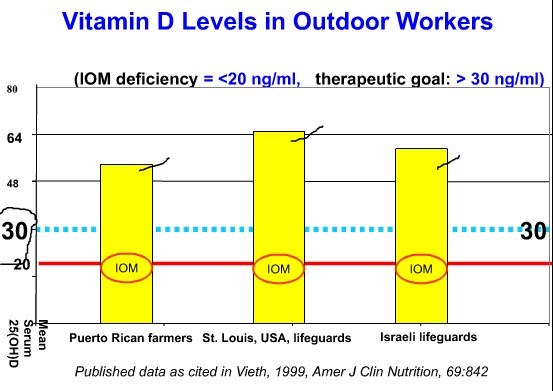 Cadaver error - shown as a chart 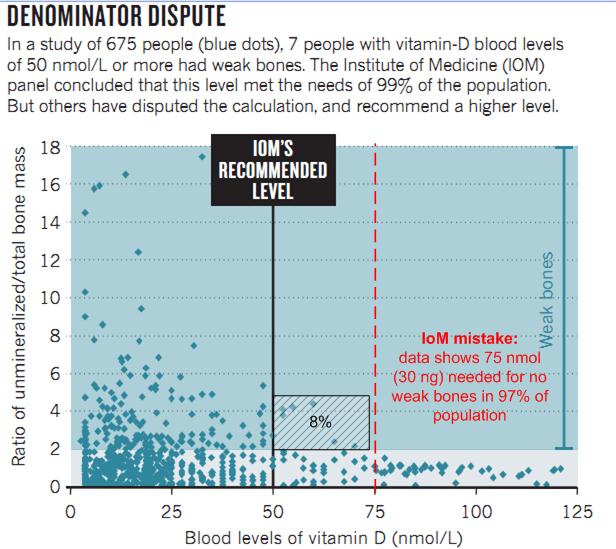 Vitamin D Deficiency: Time for Inaction (question mark)– Jan 2014         Printer Friendly PDF this page! Follow this page for updates
This page is in the following categories (# of items in each category)
How much Vitamin D 338 Top news 891