As with many health problems, the more vitamin D the better
50 ng better than 40 ng, which was better than 30 ng, which was better than 20 ng
Note: 4,400 IU daily will only occasionaly result in > 40 ng
Study found a 3.6 times reduction in Preeclampsia if > 30 ng
To get to 40 or 50 ng ( and much more reduction) you need
- much more vitamin D (especially if obese )
- the right type of Vitamin D for your body - example - gut friendly
- Cofactors (which can increase response by 2X)
-Reasons for low response to vitamin D
See also VitaminDWiki
Pages listed in BOTH the categories Pregnancy and Hypertension (preeclampsia) 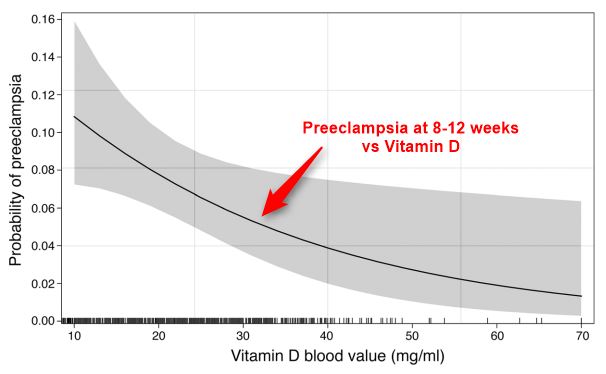 BACKGROUND. Low vitamin D status in pregnancy was proposed as a risk factor of preeclampsia.

METHODS. We assessed the effect of vitamin D supplementation (4,400 vs. 400 IU/day), initiated early in pregnancy (10–18 weeks), on the development of preeclampsia. The effects of serum vitamin D (25-hydroxyvitamin D [25OHD]) levels on preeclampsia incidence at trial entry and in the third trimester (32–38 weeks) were studied. We also conducted a nested case-control study of 157 women to investigate peripheral blood vitamin D–associated gene expression profiles at 10 to 18 weeks in 47 participants who developed preeclampsia.

RESULTS. Of 881 women randomized, outcome data were available for 816, with 67 (8.2%) developing preeclampsia. There was no significant difference between treatment (N = 408) or control (N = 408) groups in the incidence of preeclampsia (8.08% vs. 8.33%, respectively; relative risk: 0.97; 95% CI, 0.61–1.53). However, in a cohort analysis and after adjustment for confounders, a significant effect of sufficient vitamin D status (25OHD =30 ng/ml) was observed in both early and late pregnancy compared with insufficient levels (25OHD <30 ng/ml) (adjusted odds ratio, 0.28; 95% CI, 0.10–0.96). Differential expression of 348 vitamin D–associated genes (158 upregulated) was found in peripheral blood of women who developed preeclampsia (FDR <0.05 in the Vitamin D Antenatal Asthma Reduction Trial [VDAART]; P < 0.05 in a replication cohort). Functional enrichment and network analyses of this vitamin D–associated gene set suggests several highly functional modules related to systematic inflammatory and immune responses, including some nodes with a high degree of connectivity.

CONCLUSIONS. Vitamin D supplementation initiated in weeks 10–18 of pregnancy did not reduce preeclampsia incidence in the intention-to-treat paradigm. However, vitamin D levels of 30 ng/ml or higher at trial entry and in late pregnancy were associated with a lower risk of preeclampsia. Differentially expressed vitamin D–associated transcriptomes implicated the emergence of an early pregnancy, distinctive immune response in women who went on to develop preeclampsia. 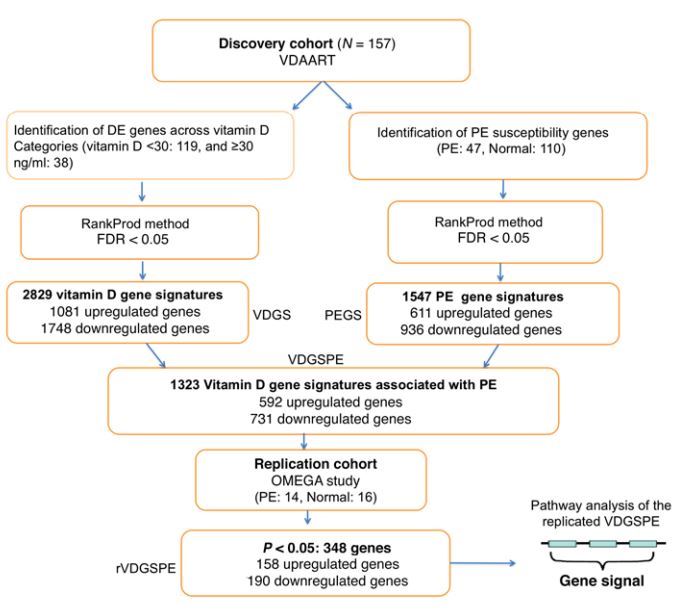 Exluded those who did not have asthma in the family

_New title for this page Feb 2019. caused the visitor count to reset.
There have actually been 6103 visitors to this page since it was originally made

Preeclampsia risk reduced by higher levels of vitamin D (VDAART 4,400 IU) - RCT Nov 2016         Printer Friendly Follow this page for updates
This page is in the following categories (# of items in each category)
Pregnancy 785 Intervention 753 Hypertension 153