Anticipated Survival after 1 or two years for scores A, B, C 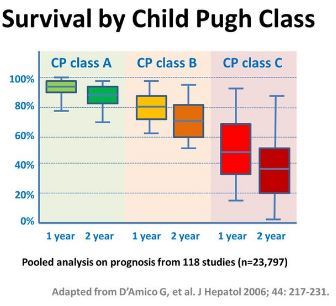 
BACKGROUND:
The liver is involved in the metabolism of vitamin D. The prevalence of osteopenia in alcoholic liver disease (ALD) patients is between 34-48%, and the prevalence of osteoporosis is between 11-36%. Advanced liver disease is considered a risk factor for osteoporosis development. Aim of our study was to establish the relationship between vitamin D level and Child-Pugh score in patients with alcoholic liver cirrhosis (ALC), and to evaluate the effects of oral vitamin D supplementation.

METHODS:
The clinical and laboratory data of seventy male patients, with ALC, in absence of active alcohol intake were enrolled. A supplementation of cholecalciferol 1000 IU/day was administered. The vitamin D status was analyzed during the study, in patients stratified by Child-Pugh score.

RESULTS:
The study was completed by fifty patients. At the enrollment, the mean level of vitamin D was 60.73±28.02, 50.53±39.52 and 26.71±12.81 nmol/l, respectively for Child-Pugh score class A, B and C. During vitamin D supplementation it was found in all the patients a significant increased of its levels during the first six months (p<0.05). However, in class C the improvement was consistent also after year (p <0.05). A the end of the study, two of seven patients initially in class C changed in class A, four from class C to B, and one remained in class C (p=0.012). Out of seventeen patients initially in class B, eleven change in class A, and six remained in class B.

Alcoholic liver cirrhosis treated by 1,000 IU of vitamin D – July 2018         Printer Friendly PDF this page! Follow this page for updates
This page is in the following categories (# of items in each category)
Liver 97 Intervention 731