Items in both categories Stroke and Intervention are listed here: 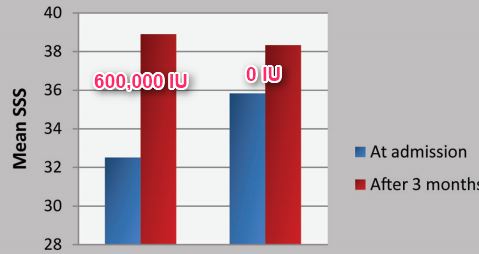 Introduction: Vitamin D deficiency has reached epidemic proportions in India with prevalence rates of 70-100% in the general population. Low vitamin D levels are associated with worse outcomes in ischemic strokes. The outcome of stroke after vitamin D replenishment has not been much studied.

Materials and Methods: This is a non blinded randomized controlled trial conducted in ischemic stroke patients. The patients were divided into two groups (A and B ) where Group A received a single dose of 6 lac IU of Cholecalciferol Intramascular (IM) injection and Group B were not given vitamin D. Finally 30 patients in each group were analyzed. SSS was applied to evaluate the stroke severity at the onset and at the follow up after three months in both groups. The difference in SSS was analyzed using SPSS software. Independent t-test was applied and p-value < 0.05 was taken as significant.

Conclusion: The results showed that there is a significant improvement in the stroke outcome after three months in those patients who were supplemented with vitamin D. Thus screening for vitamin D deficiency in stroke patients is essential and vitamin D replenishment will improve the stroke outcome.

Better outcome following Ischemic stroke if injected with 600,000 IU of vitamin D – RCT Feb 2017         Printer Friendly PDF this page! Follow this page for updates
This page is in the following categories (# of items in each category)
Loading dose for Vitamin D 188 Stroke 105 Injection 61