Vitamin D and Endometrium: A Systematic Review of a Neglected Area of Research 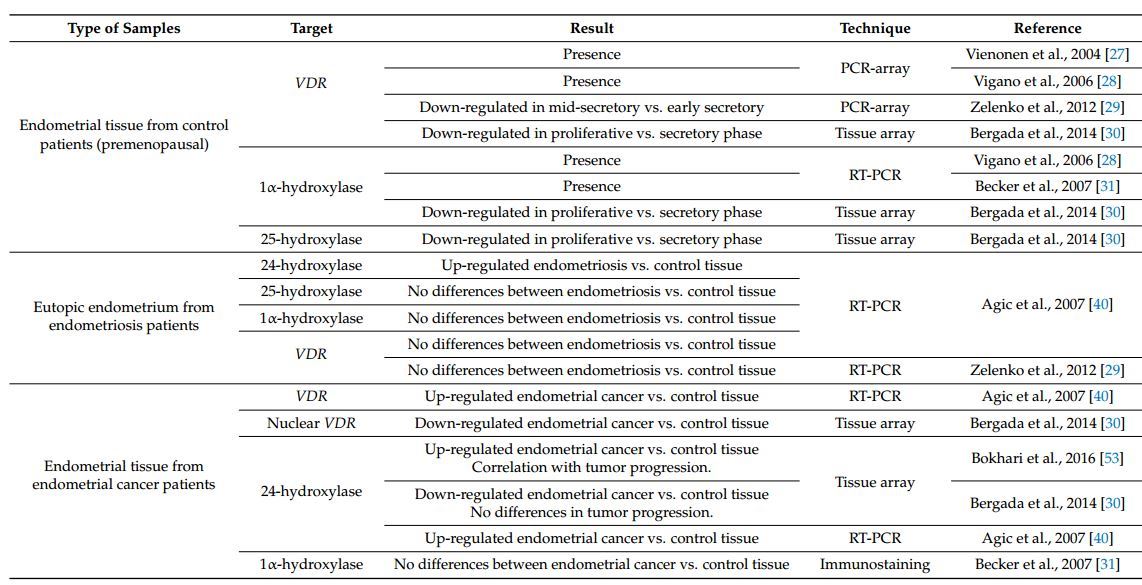 Growing evidence supports a role of vitamin D (VD) in reproductive health. Vitamin D receptor (VDR) is expressed in the ovary, endometrium, and myometrium. The biological actions of VD in fertility and reproductive tissues have been investigated but mainly using animal models. Conversely, the molecular data addressing the mechanisms underlying VD action in the physiologic endometrium and in endometrial pathologies are still scant. Levels of VDR expression according to the menstrual cycle are yet to be definitively clarified, possibly being lower in the proliferative compared to the secretory phase and in mid-secretory compared to early secretory phase. Endometrial tissue also expresses the enzymes involved in the metabolism of VD. The potential anti-proliferative and anti-inflammatory effects of VD for the treatment of endometriosis have been investigated in recent years. Treatment of ectopic endometrial cells with 1,25(OH)2D3 could significantly reduce cytokine-mediated inflammatory responses. An alteration of VD metabolism in terms of increased 24-hydroxylase mRNA and protein expression has been demonstrated in endometrial cancer, albeit not consistently. The effect of the active form of the vitamin as an anti-proliferative, pro-apoptotic, anti-inflammatory, and differentiation-inducing agent has been demonstrated in various endometrial cancer cell lines.

Endometriosis, Endometrial Cancer, and poor Vitamin D or Receptor – Aug 2018         Printer Friendly PDF this page! Follow this page for updates
This page is in the following categories (# of items in each category)
Cancer - Other 57 Women 167 Vitamin D Receptor 459