Vitamin D supplementation trial in infancy: body composition effects at 3 years of age in a prospective follow-up study from Montréal

Background: The impact of vitamin D status on body composition is not well understood.

From the PDF: 1600 IU tallest, most active, leanest 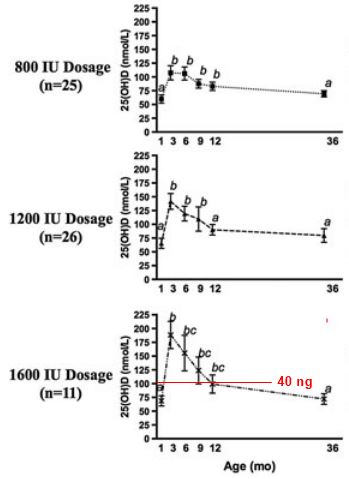 1600 IU is too much at 1 month but too little at 12 months
Dose should not be constant, but be proportional to weight

Having a good level of vitamin D cuts in half the amount of:

Need even more IUs of vitamin D to get a good level if;

Did you know that:


Getting Vitamin D into infants
Many infants reject vitamin D drops, even when put on nipple
I speculate that the rejection is due to one or more of: additives, taste, and oils.
Infants have a hard time digesting oils, 1999  1997   and palm oils W.A. Price 1 2 3
Coconut oil, such as in D-Drops, is digested by infants. 1,   2   3
Bio-Tech Pharmacal Vitamin D has NO additves, taste, nor oil
One capsule of 50,000 Bio-Tech Pharmacal Vitamin D could be stirred into monthly formula or given once a month
this would result in ~1,600 IUs per day for infant, and higher dose with weight/age/formula consumption

Vitamin D improved child muscle mass even without varying dose with weight – RCT Feb 2016         Printer Friendly PDF this page! Follow this page for updates
This page is in the following categories (# of items in each category)
Intervention 734 Infant-Child 710

Extreme preterm infants need a total of 1,000 IU of vitamin D daily – RCT Apr...Infants getting up to 1600 IU did not increase blood level of vitamin D – RCT...