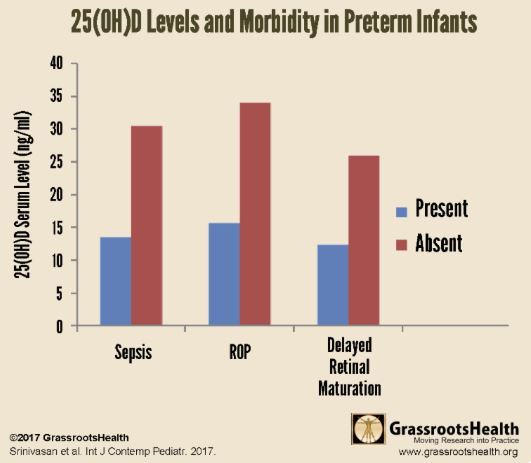 Having a good level of vitamin D cuts in half the amount of:

Need even more IUs of vitamin D to get a good level if;

Getting Vitamin D into infants
Many infants reject vitamin D drops, even when put on nipple
I speculate that the rejection is due to one or more of: additives, taste, and oils.
Infants have a hard time digesting oils, 1999  1997   and palm oils W.A. Price 1 2 3
Coconut oil, such as in D-Drops, is digested by infants. 1,   2   3
Bio-Tech Pharmacal Vitamin D has NO additves, taste, oil
One capsule of 50,000 Bio-Tech Pharmacal Vitamin D could be stirred into monthly formula
this would result in ~1,600 IUs per day for infant, and higher dose with weight/age/formula consumption

Conclusions: These data suggest that cord blood vitamin D levels are low in preterm infants and 800-1000 IU vitamin D supplementation is advisable to achieve levels >30 ng/ml. Infants with low levels of vitamin D have higher incidence of sepsis, and ROP.

Summary by Grassroots Health May 2017

A study recently published by Srinivasan et al. looked at 25(OH)D serum levels of 80 preterm infants (gestation less than 34 weeks). Objectives of the study were to determine the vitamin D levels in the cord blood of these infants, randomly assign each infant to either 400 IU daily or 800-1000 IU daily supplementation, and then to correlate the serum vitamin D levels to neonatal morbidity and outcome of sepsis, retinopathy of prematurity (ROP), and delayed retinal maturation.

Within this group of premature infants:

The paper concludes that the American Academy of Pediatrics' guidelines for supplementation in infants of 400 IU is insufficient, and most infants require 800 - 1000 IU vitamin D soon after birth to maintain physiological vitamin D levels of ≥ 30 ng/ml, especially if they are exclusively breast fed.

Printer Friendly PDF this page! Follow this page for updates
This page is in the following categories (# of items in each category)
Intervention 625 Infant-Child 591
Edit Comments Files 2