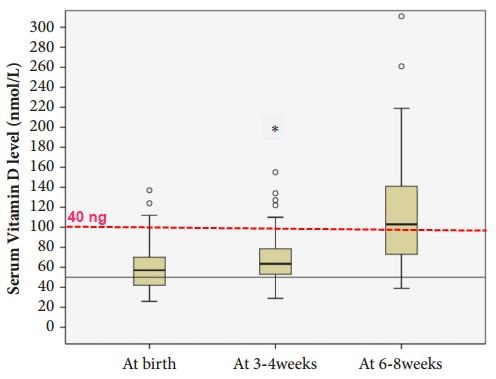 Objective. To determine the prevalence of Vitamin D (VitD) deficiency/insufficiency in mothers of preterm neonates less than or equal to 32 weeks of gestation and determine if the current level of VitD supplementation used for preterm neonates is appropriate.

Design. Prospective study from May 2015 to November 2016. Setting. Neonatal Intensive Care Unit at the Canberra Hospital. Patients. Mothers and their preterm neonates born less than or equal to 32 weeks gestation. Interventions. Maternal VitD levels were obtained within 3-4 days following delivery. Neonatal VitD levels were obtained in the first 3-4 days of life, at 3-4 weeks of age, and at 6-8 weeks of age. Demographic data and data on VitD intake from parenteral nutrition, enteral feeds, and vitamin supplementation agents were collected.

Preterm babies have low vitamin D, but recover in 6 weeks with 800 IU supplementation – Jan 2019         (Cached) Printer Friendly PDF this page! Follow this page for updates
This page is in the following categories (# of items in each category)
Intervention 731 Infant-Child 702