The aim of this study is to assess vitamin D levels in eclampsia, preeclampsia and healthy pregnant women and the role of vitamin D deficiency in the etiology of preeclampsia (PE). Forty healthy pregnant women, 83 preeclamptic and 32 eclamptic pregnant women were included. Maternal and infant medical records were reviewed. Blood samples were obtained from all groups. Demographics and serum vitamin D levels were compared between the groups. No statistical differences were observed in age, gravidity, parity, weight, height and BMI between the three groups.

Week of pregnancy and weight at birth in eclamptic and preeclamptic patients were lower compared to the healthy patients (P<0.001 and P<0.001, respectively).

Systolic and diastolic blood pressures were higher in eclamptic (P<0.001) and preeclamptic patients (P<0.001) compared to the healthy pregnant group.

The rate of cesarean section was found to be higher in preeclamptic and eclamptic patients (P<0.001).

Preeclamptic and eclamptic women were similar in terms of the data compared. Vitamin D supplementation is considered to decrease the risk of both preeclampsia and eclampsia in the patient population at risk for vitamin D deficiency. 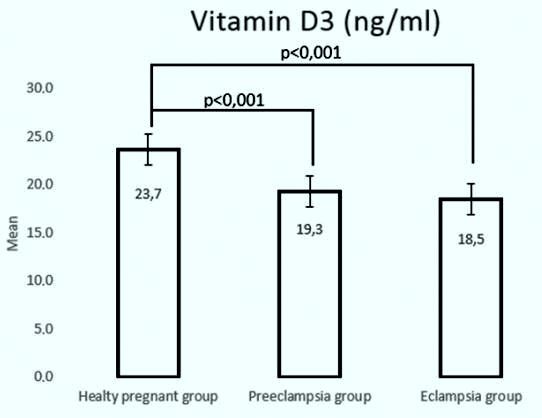 Preeclampsia and eclampsia associated with lower vitamin D, etc. – Sept 2015         Printer Friendly Follow this page for updates
This page is in the following categories (# of items in each category)
Pregnancy 785 Hypertension 153