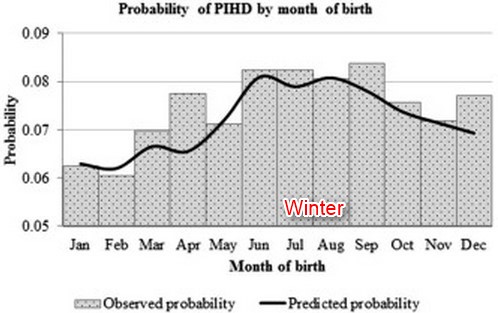 OBJECTIVES:
To assess the seasonal variation of pregnancy induced hypertensive disorders (PIHD) in an Australian population.

METHODS:
Retrospective study of 59,993 South Australian singleton live born births, for whom a body mass index (BMI) of the mother and sex of the baby were recorded, during 2007-2011 in the South Australian Perinatal Statistics Collection. The incidence of PIHD in relation to birth date was assessed. Fourier series analysis was used to model seasonal trends.

CONCLUSIONS:
These epidemiological data support seasonal periodicity for PIHD in an Australian population. The highest incidence of PIHD was associated with birth in the Winter months (Jun/Jul/Aug). The etiology of PIHD is still elusive, but theories include

Recent studies found a relation between both infection and low maternal vitamin D levels and pre-eclamspia. These conditions could explain the detected seasonality for PIHD. Further investigation into the biological mechanism(s) for this finding should be undertaken to identify additional risk factors, so PIHD can be prevented in the clinic.

Publisher wants $32 for the PDF

Hypertension in pregnancy (preeclampsia) more frequent in winter (low vitamin D) – Jan 2015         Printer Friendly PDF this page! Follow this page for updates
This page is in the following categories (# of items in each category)
Pregnancy 766 Hypertension 140