Maternal Vitamin D Status and Risk of Pre-Eclampsia: A Systematic Review and Meta-Analysis

Methods: PubMed, ISI (Web of science), SCOPUS, SCIRUS, Google Scholar, and EMBASE databases were searched to identify related articles published through December 2012. For systematic review, we found 15 articles that assessed the association between maternal serum vitamin D levels and risk of pre-eclampsia. The meta-analysis was done on 8 studies that reported odds ratios or relative risks for pre-eclampsia. Between-study heterogeneity was examined using Cochran's Q test and I2. Subgroup analysis and meta-regression were used to find possible sources of heterogeneity.

Results: The meta-analysis on 8 relevant papers revealed an overall significant association between vitamin D deficiency and risk of pre-eclampsia; however, there was significant between-study heterogeneity (I2 = 52.7%; P = .039).
In the subgroup analysis, we found that the overall effect was significant for studies that defined vitamin D deficiency as 25(OH)D ≤ 50 nmol/L (20 ng/mL), but not for those that considered it as <38 nmol/L (15.2 ng/mL).
The association was seen for “cohort or nested case-control studies” as well as for “cross-sectional or case-control studies” (2.78; 1.45–5.33; P = .002).
When the analysis was done by study location, the associations remained significant only for studies that came from the United States.

Conclusion: There was a significant relationship between vitamin D deficiency and increased risk of pre-eclampsia.
Further studies are required, particularly in developing countries.
PDF is attached at the bottom of this page

One of the many charts in the PDF 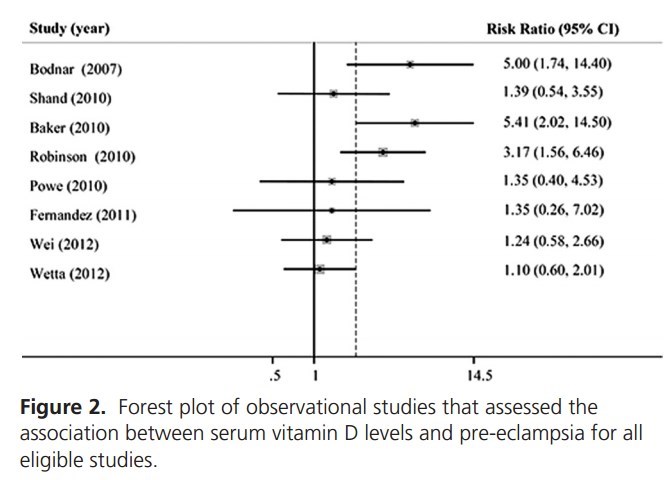 BACKGROUND: Secondary hyperparathyroidism, which is defined by a high concentration of intact parathyroid hormone when circulating 25-hydroxyvitamin D [25(OH)D] is low, is a functional indicator of vitamin D insufficiency and a sign of impaired calcium metabolism. Two large randomized controlled trials examined effects of calcium supplementation on preeclampsia but did not consider the vitamin D status of mothers.

OBJECTIVE: We examined the association of secondary hyperparathyroidism with risk of preeclampsia.

CONCLUSION: Some women who are vitamin D insufficient develop secondary hyperparathyroidism, which is associated with increased risk of preeclampsia.

Preeclampsia 2.7X more frequent if low vitamin D – meta-analysis Sept 2013         Printer Friendly PDF this page! Follow this page for updates
This page is in the following categories (# of items in each category)
Pregnancy 837 Meta-analysis of Vitamin D 584 Hypertension 155