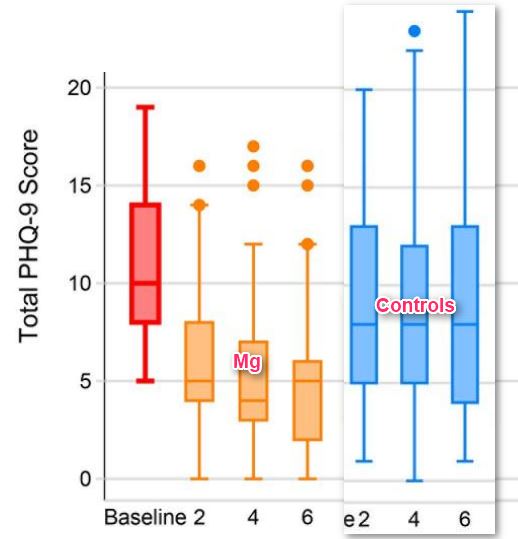 Current treatment options for depression are limited by efficacy, cost, availability, side effects, and acceptability to patients. Several studies have looked at the association between magnesium and depression, yet its role in symptom management is unclear. The objective of this trial was to test whether supplementation with over-the-counter magnesium chloride improves symptoms of depression. An open-label, blocked, randomized, cross-over trial was carried out in outpatient primary care clinics on 126 adults (mean age 52; 38% male) diagnosed with and currently experiencing mild-to-moderate symptoms with Patient Health Questionnaire-9 (PHQ-9) scores of 5-19. The intervention was 6 weeks of active treatment (248 mg of elemental magnesium per day) compared to 6 weeks of control (no treatment). Assessments of depression symptoms were completed at bi-weekly phone calls. The primary outcome was the net difference in the change in depression symptoms from baseline to the end of each treatment period. Secondary outcomes included changes in anxiety symptoms as well as adherence to the supplement regimen, appearance of adverse effects, and intention to use magnesium supplements in the future. Between June 2015 and May 2016, 112 participants provided analyzable data. Consumption of magnesium chloride for 6 weeks resulted in a clinically significant net improvement in PHQ-9 scores of -6.0 points (CI -7.9, -4.2; P<0.001) and net improvement in Generalized Anxiety Disorders-7 scores of -4.5 points (CI -6.6, -2.4; P<0.001). Average adherence was 83% by pill count. The supplements were well tolerated and 61% of participants reported they would use magnesium in the future. Similar effects were observed regardless of age, gender, baseline severity of depression, baseline magnesium level, or use of antidepressant treatments. Effects were observed within two weeks. Magnesium is effective for mild-to-moderate depression in adults. It works quickly and is well tolerated without the need for close monitoring for toxicity.

OBJECTIVES:
The aim of this study was to determine the effect of magnesium supplementation on the depression status of depressed patients suffering from magnesium deficiency.

METHODS:
Sixty depressed people suffering from hypomagnesemia participated in this trial. The individuals were randomly categorized into two groups of 30 members; one receiving two 250-mg tablets of magnesium oxide (MG) daily and the other receiving placebo (PG) for 8 wk. The Beck Depression Inventory-II was conducted and the concentration of serum magnesium was measured.

RESULTS:
At the end of intervention, 88.5% of the MG and 48.1% of the PG (P = 0.002) had a normal level of magnesium. The mean changes of serum magnesium were significantly different across the two groups. After the intervention, the mean Beck score significantly declined. However, in the MG, this reduction was more significant than in the PG (P = 0.02), so that the mean changes in this group experienced 15.65 ± 8.9 reduction, but in the PG, it declined by 10.40 ± 7.9.

“Effects were observed within two weeks.”
Most statistically significant change was the reduction in headaches

Items in Both categories Depression and Magnesium are listed here:

Items in Both the categories Headache and Magnesium

Items in Both categories Depression and Omega-3 are listed here:

Depression greatly reduced by taking 250 mg of Magnesium Chloride daily for 6 weeks– RCT June 2017         Printer Friendly PDF this page! Follow this page for updates
This page is in the following categories (# of items in each category)
Depression 240 Vitamin D and Magnesium 324