Effects of high doses of vitamin D3 on mucosa-associated gut microbiome vary between regions of the human gastrointestinal tract. 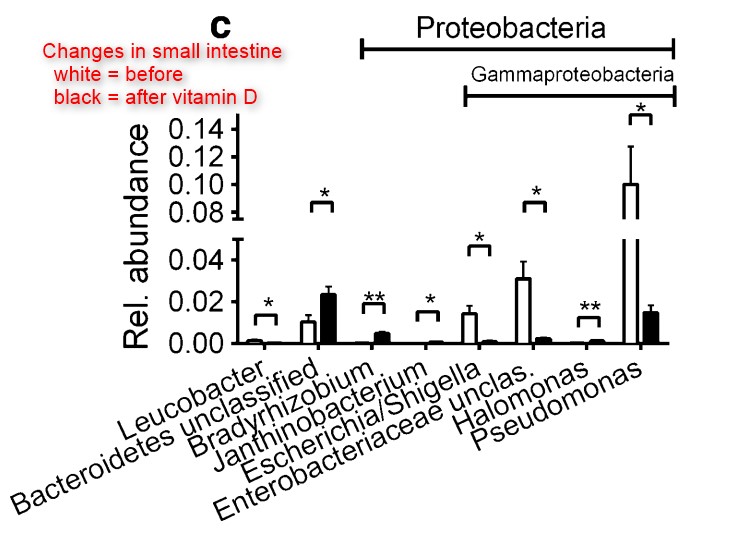 PURPOSE:
Vitamin D is well known for its effects on bone mineralisation but has also been attributed immunomodulatory properties. It positively influences human health, but in vivo data describing vitamin D effects on the human gut microbiome are missing. We aimed to investigate the effects of oral vitamin D3 supplementation on the human mucosa-associated and stool microbiome as well as CD8+ T cells in healthy volunteers.

METHODS:
This was an interventional, open-label, pilot study. Sixteen healthy volunteers (7 females, 9 males) were endoscopically examined to access a total of 7 sites. We sampled stomach, small bowel, colon, and stools before and after 8 weeks of vitamin D3 supplementation. Bacterial composition was assessed by pyrosequencing the 16S rRNA gene (V1-2), and CD8+ T cell counts were determined by flow cytometry.

RESULTS:
Vitamin D3 supplementation changed the gut microbiome in the upper GI tract (gastric corpus, antrum, and duodenum). We found a decreased relative abundance of Gammaproteobacteria including Pseudomonas spp. and Escherichia/Shigella spp. and increased bacterial richness. No major changes occurred in the terminal ileum, appendiceal orifice, ascending colon, and sigmoid colon or in stools, but the CD8+ T cell fraction was significantly increased in the terminal ileum.

CONCLUSION:
Vitamin D3 modulates the gut microbiome of the upper GI tract which might explain its positive influence on gastrointestinal diseases, such as inflammatory bowel disease or bacterial infections. The local effects of vitamin D demonstrate pronounced regional differences in the response of the GI microbiome to external factors, which should be considered in future studies investigating the human microbiome.

Note: Both Vitamin D and antibiotics make massive changes to the gut microbiome

Items in both categories Gut and Antibiotics/Probiotics are listed here:

by Dr. Rhoda Patrick of FoundMyFitness
She made a 9 minute video for her subscribers
From her email to subscribers
Hi, everyone!
I created a new video just for you guys talking about a recent study on vitamin D and the human gut microbiome: "Effects of high doses of vitamin D3 on mucosa-associated gut microbiome vary between regions of the human gastrointestinal tract"
As someone who has published on vitamin D, I talk a lot about it. I also try to encourage my family and friends to get their D levels measured to make sure they are in what I've called the vitamin D sweet spot... which includes blood levels of around 40-60 ng/ml.
(Note: ng/ml is the standard unit of measure in the US...in most of Europe nmol per L are used. To convert nmol/l into ng/ml simply divide by 2.5)
The reason I like to fall within this range is because around 30 different studies ranging from the 1960’s to about 2013 have shown that people that have these blood levels have the lowest all-cause mortality.
In line with this, elevating blood levels above 40 ng/ml have been shown to decrease the rates of various cancers, decrease the infection rate by 10-50% and the overall mortality rate by ~20% per year.
If you want to dive deeper into vitamin D in a broad sense, you can listen to this podcast episode dedicated to it.
Today, however, I want to talk about a new vitamin D study that I find interesting because it touches on something that I was previously unaware of it having any sort of relationship to: the human gut microbiome.
The recent study...The small study included around 16 healthy volunteers were given a pretty high dose of vitamin D for a short time period. These individuals were given 140 IU/kg body weight daily ( which is close to 11,000 IU for a 180 lb man) for the first 4 weeks and 70IU/kg daily (which is more of a normal dose of 5,500 IU for an 180 lb man) for the last 4 weeks. All the participants endoscopically had their stomach, small bowel, colon, and stools sampled before and after 8 weeks of vitamin D3 supplementation. The things people do in the name of science, right? I hope they were compensated.
Here's what happened...The mean vitamin D levels were 52 ng/ml after the 8 weeks of supplementation. Vitamin D supplementation increased the biodiversity of the gut microbiome in the upper GI tract (but had no effect on the microbiome in the colon which is really where almost all our gut bacteria reside. There was a decrease in opportunistic pathogenic bacteria such as pseudomonas, escherichia coli, h. pylori, and shigella in the small intestine and the stomach.
The vitamin D supplementation also increased the number of a certain type of immune cell called cytotoxic T cells, which are a specialized type of T cell in multiple tissues including the liver that kill cells that have been infected with viruses and kill cancer cells.

I think this was a very interesting study because it showed a mechanism by which vitamin D protects against different viral infections and also one possible mechanism by which it may lower cancer incidence (which many other studies have shown). This was obviously a very small sample size of 16 people so larger randomized controlled trials should be done to confirm and also maybe longer than 2 months.
This just goes to show how important it might be to get vitamin D levels measured, even if supplementing. Many people have common gene polymorphisms that affect the conversion of vitamin D3 into 25OHD, the precursor to the active form of vitamin D. Typically 1,000IU of vitamin D3 raises blood serum levels by 5ng/ml. However, if you have one of the common genetic polymorphisms this equation may not hold true. In this case, people may have to take the upper end of 10,000 IU per day just to get their blood D levels around 30 ng/ml.
To put it another way... one person's ideal dose may be another's too much dose.
If you have done a 23andMe genetic test you can use my free genetic tool to to learn more about vitamin D polymorphisms, some of which have been included in the report.
That is it for now...I’ll talk you guys soon!

Title change made July 2021 caused the visitor count to reset.
There have actually been 23536 visitors to this page since it was originally made
Gut microbiome massively changed by weekly vitamin D – July 2015         Printer Friendly Follow this page for updates
This page is in the following categories (# of items in each category)
Gut 181 Top news 900 Microbiome 27