Study uses "optimal" index as > 8 to prevent cardiovascular disease
Germany has more people with indices > 8 - perhaps due to eating more fish
60% of Americans and Germans believe that they have an adequate diet, and do not need to supplement

Little is known about the relationship between perceptions of nutrient adequacy and biomarkers of nutrition status. This cross-sectional study of U.S. and German adults (n = 200; 18–80 years) compared dietary practices, knowledge, and beliefs of omega-3 fatty acids (O3-FA) with the omega-3 index (O3-I), an erythrocyte-based biomarker associated with cardiovascular disease (CVD) risk. More than half of adults believed that O3-FAs are beneficial for heart and brain health and could correctly identify the food sources of O3-FA. However, the mean O3-I in the U.S. (4.3%) and Germany (5.5%) puts the majority of adults sampled (99%) in intermediate or high CVD-risk categories. More Americans were considered at high CVD-risk (40%) when compared with Germans (10%). In the U.S., but not Germany, women had a significantly higher O3-I than men (4.8% vs. 3.8%, p < 0.001). In the intermediate CVD-risk group, about one-third of adults in both countries (30% in the U.S. and 27% in Germany) believed their diet was adequate in O3-FA. Notably, mean O3-I concentrations did not significantly differ with dietary perceptions of adequacy. More adults in Germany (26%) than in the U.S. (10%) believed that dietary supplements are needed to achieve a balanced diet. In spite of adequate knowledge about food sources and a consistent belief that O3-FA are important for health, very few participants had O3-I concentrations in the range for CVD protection. 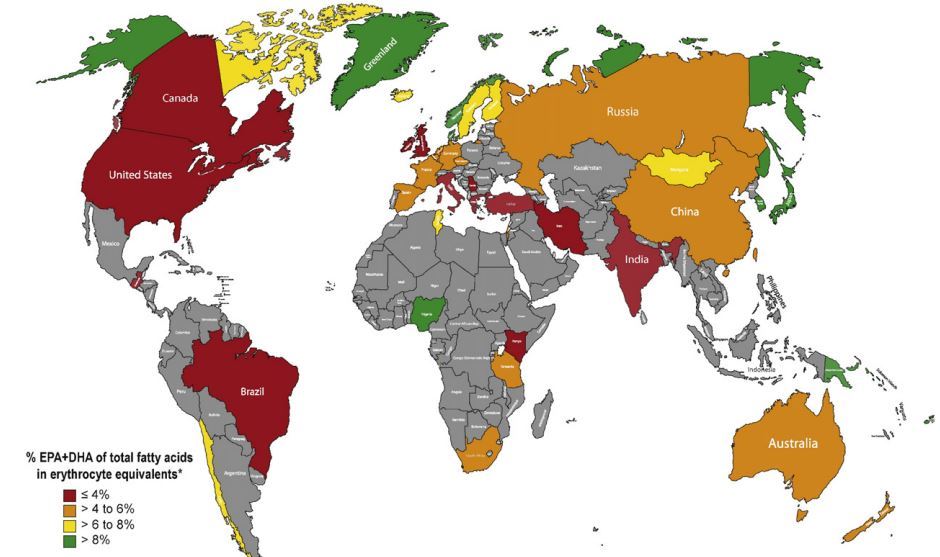 Omega-3 levels are sub-optimal in 99 percent of Americans – Aug 2017         (Cached) Printer Friendly PDF this page! Follow this page for updates
This page is in the following categories (# of items in each category)
Vitamin D and Omega-3 369