VitaminDWiki pages in both of the categories Pregnancy and Omega-3

WHAT IS KNOWN ALREADY
Intake of ω3-PUFA improves oocyte and embryo quality in animal and human studies. However, a recent cohort study found no relation between circulating ω3-PUFA levels and pregnancy rates after ART.

STUDY DESIGN SIZE, AND DURATION
This analysis included a random sample of 100 women from a prospective cohort study (EARTH) at the Massachusetts General Hospital Fertility Center who underwent 136 ART cycles within one year of blood collection.

LIMITATIONS REASONS FOR CAUTION
The generalizability of the findings to populations not undergoing infertility treatment may be limited. The use of a single measurement of serum fatty acids to characterize exposure may lead to potential misclassification during follow up.

WIDER IMPLICATIONS OF THE FINDINGS
Serum ω3-PUFA are considered biomarkers of dietary intake. The association of higher serum long chain ω3-PUFA levels with improved ART outcomes suggests that increased intake of these fats be may be beneficial for women undergoing infertility treatment with ART.

Objective: This study was designed to assess the effects of omega-3 fatty acid supplementation on inflammatory factors, biomarkers of oxidative stress, and pregnancy outcomes among pregnant women with gestational diabetes (GDM).

Omega-3 Long Chain Polyunsaturated Fatty Acids to Prevent Preterm Birth: A Systematic Review and Meta-analysis. March 2015
perinatal death was lower 0.3% compared with 1.2% if received omega-3 before 21 weeks of gestation
Snip
TABULATION, INTEGRATION, AND RESULTS:
Nine randomized trials including 3,854 eligible women were identified. Women who received omega-3 had a similar rate of preterm birth before 37 weeks of gestation compared with women in the control group (7.7% compared with 9.1%, respectively; relative risk 0.90, 95% confidence interval [CI] 0.72-1.11).
There were no significant differences in birth weight, neonatal intensive care unit admission, necrotizing enterocolitis, sepsis, or perinatal death in the omega-3 compared with control groups, respectively. There were no significant differences in the subgroup analyses,
except for the rate of perinatal death, which was lower (0.3% compared with 1.2%; relative risk 0.27, 95% CI 0.09-0.80) in the women who received omega-3 before 21 weeks of gestation and in trials with low risk of bias (0.3% compared with 1.0%; relative risk 0.28, 95% CI 0.09-0.89) compared with women in the control group. However, in no randomized controlled trial was perinatal death the primary outcome.

Objective: The aim of this study was to provide evidence-based recommendations for omega-3 supplementation during pregnancy through a systematic review of level-1 data published on this topic.

Methods: We reviewed all randomized-controlled trials (RCTs) including women who were randomized to treatment with either omega-3 supplementation or control (placebo or no treatment) during pregnancy and analyzed all the outcomes reported in the trials, separately. We planned to evaluate the effect of omega-3 on: preterm birth (PTB); pre-eclampsia (PE) and intrauterine growth restriction (IUGR); gestational diabetes; perinatal mortality; small for gestational age (SGA) and birth weight; infant eye and brain development; and postpartum depression.

Publisher wants $52 for the PDF 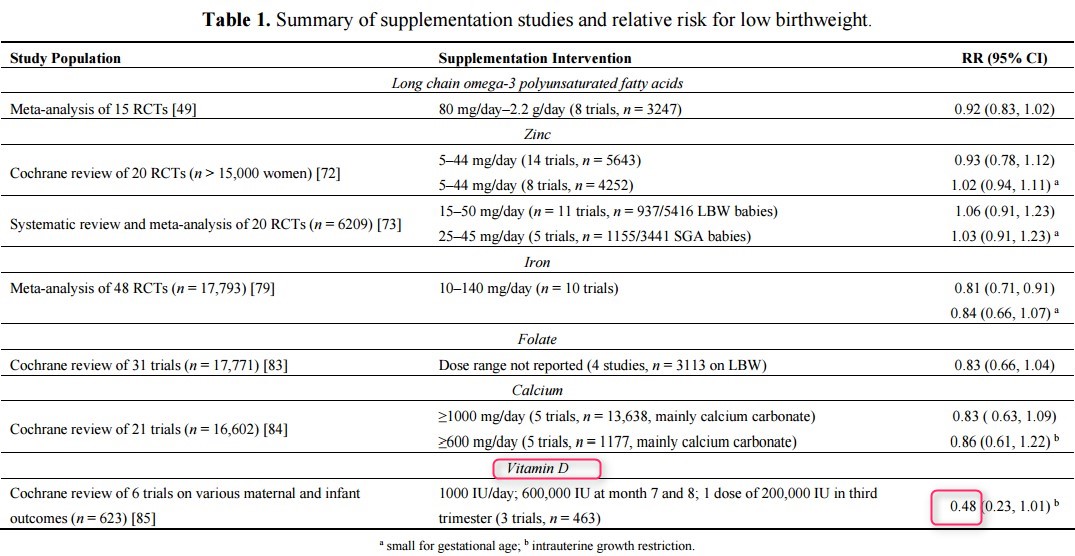 OBJECTIVE: To investigate the rate of Omega 3 use in pregnant women and its effect on pregnancy outcome.

METHODS: The study was conducted from January to April 2010 at Tamin Ejtemaee Hospital, Hamedan, Iran, and comprised women who were carrying 16 weeks of pregnancy and were referred to the study site. They were divided into 3 groups: those who did not consume fish in a month, those who consumed fish 1-3 times in the preceding month, and those who had it more than 3 times in the same period. Data was analysed using SPSS version 16.


OBJECTIVE:
Preterm birth continues to be the one of the leading causes of infant deaths worldwide. There is a need for effective, easily available, safe and acceptable interventions to prevent preterm delivery, especially before 34 weeks of gestation. Omega-3 fatty acids such as EPA (eicosapentanoic acid) and DHA (docosahexanoic acid) are available as over the counter nutritional supplements, and are taken by women to improve pregnancy outcomes, without any clear recommendations. We undertook a systematic review to assess the effects of omega-3 fatty acids on early (<34 weeks) and any (<37 weeks) preterm delivery.

METHODS:
We searched MEDLINE, EMBASE and Cochrane Library from inception to 2014 without any language restrictions. Study selection, quality assessment and data extraction were done by two independent reviewers. Results were summarized as relative risks and 95% confidence intervals for dichotomous outcomes and mean differences for continuous outcomes.

Effect of n-3 long-chain polyunsaturated fatty acid intake during pregnancy on maternal, infant, and child health outcomes: a systematic review.
- - -
In conclusion, n-3 LCPUFA supplementation during pregnancy resulted in a

IS TOO MUCH DHA HARMFUL DURING PREGNANCY?

Babycenter says it is safe to take Omega-3 - no mercury

Is it safe to take fish oil or other omega-3 supplements during pregnancy?

CONCLUSION:
Indications of associations of maternal LC-PUFA status with child emotional and behavioral problems were found. Future research is needed to identify LC-PUFA-sensitive periods of fetal brain development by including multiple assessments of prenatal LC-PUFA status.

BACKGROUND: Prenatal consumption of omega-3 fatty acids can act as an adjuvant in the development of the immune system and affect the inflammatory response of neonates.

METHODS: We conducted a double-blind, randomized, placebo-controlled trial in Cuernavaca, Mexico. We randomly assigned 1,094 pregnant women (18-35 years of age) to receive 400 mg/d of algal docosahexaenoic acid (DHA) or placebo from 18 to 22 weeks of gestation through delivery. Birth outcomes and respiratory symptoms information until 18 months were available for 869 mother-child pairs. Questionnaires were administered, and maternal blood samples were obtained at baseline.
Maternal atopy was based on specific IgE levels. During follow-up, information on infants' respiratory symptoms was collected through questionnaires administered at 1, 3, 6, 9, 12, and 18 months of age. Negative binomial regression models were used to evaluate the effect of supplementation on respiratory symptoms in infants.

CONCLUSIONS: Our results support the hypothesis that DHA supplementation during pregnancy may decrease the incidence of respiratory symptoms in children with a history of maternal atopy.

Omega-3 during pregnancy cut food allergies in half - March 2014 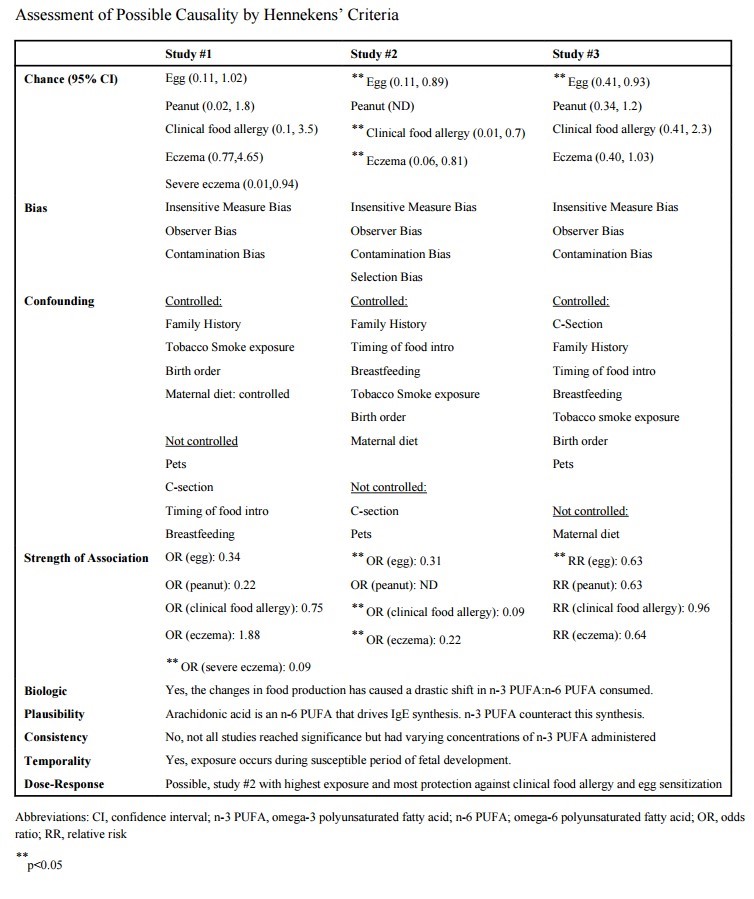 BACKGROUND: DHA is accumulated in the central nervous system (CNS) before birth and is involved in early developmental processes, such as neurite outgrowth and gene expression.

DESIGN: A risk reduction model using a randomized prospective study of term gestation single birth healthy infants born to women (n = 270) given a placebo or 400 mg/day DHA from 16 wk gestation to delivery. Fetal DHA deficiency sufficient to constrain CNS development was assessed based on increased risk that infants in the placebo group would not achieve neurodevelopment scores in the top quartile of all infants in the study.

RESULTS: Infants in the placebo group were at increased risk of lower language development assessed as 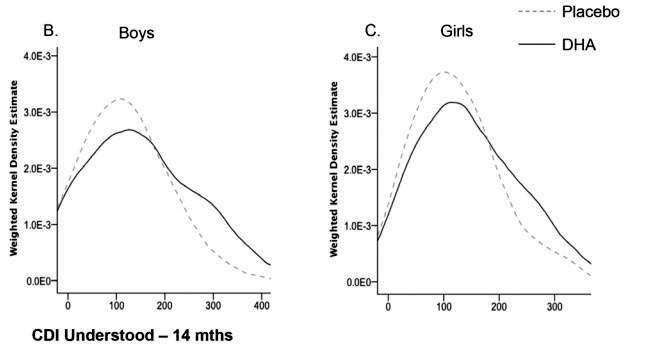 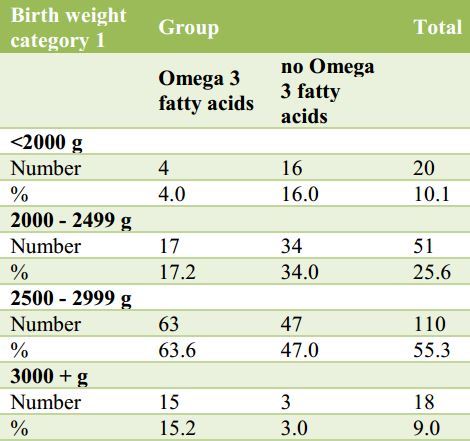 Pregnancy and infants healthier with Omega-3 supplementation         (Cached) Printer Friendly PDF this page! Follow this page for updates
This page is in the following categories (# of items in each category)
Pregnancy 793 Vitamin D and Omega-3 355