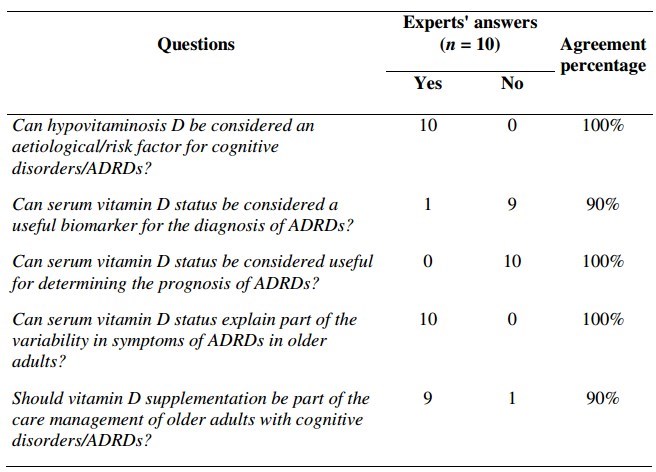 This table is at the end of this web page

Background. Hypovitaminosis D, a condition that is highly prevalent in older adults aged 65 years and above, is associated with brain changes and dementia. Given the rapidly accumulating and complex contribution of literature in the field of vitamin D and cognition, clear guidance is needed for researchers and clinicians.

Methods. International experts met at an invitational summit on 'Vitamin D and Cognition in Older Adults'. Based on previous reports and expert opinion, the task force focused on key questions relating to the role of vitamin D in Alzheimer's disease and related disorders. Each question was discussed and voted using a Delphi-like approach.

Results. The experts reached agreement that hypovitaminosis D increases the risk of cognitive decline and dementia in older adults and may alter the clinical presentation as a consequence of related comorbidities; however, at present, vitamin D level should not be used as a diagnostic or prognostic biomarker of Alzheimer's disease due to lack of specificity and insufficient evidence. This population should be screened for hypovitaminosis D because of its high prevalence, and should receive supplementation, if necessary; but this advice was not specific to cognition. During the debate, the possibility of 'critical periods' during which vitamin D may have its greatest impact on the brain was addressed; whether hypovitaminosis D influences cognition actively through deleterious effects and/or passively by loss of neuroprotection was also considered.

Conclusions. The international task force agreed on five overarching principles related to vitamin D and cognition in older adults. Several areas of uncertainty remain, and it will be necessary to revise the proposed recommendations as new findings become available.

About 1 billion individuals worldwide are estimated to have hypovitaminosis D (i.e. inadequate levels of serum 25-hydroxyvitamin D (25OHD) below 75 nmol/L or 30 ng/mL) [1, 2]. In addition to regulating bone metabolism, vitamin D exerts multiple biological actions mediated by the nuclear hormone vitamin D receptor (VDR) [2-7]. New target organs, such as the central nervous system (CNS), and evidence for a neurosteroid action of vitamin D have been reported [3-8]. The need to explore the adverse impact of vitamin D deprivation on the ageing brain seems especially important because nearly one in two older adults (i.e., aged 65 years and above) [2] and 70-90% of adults with cognitive difficulties [9] have hypovitaminosis D. Together, this raises the possibility that vitamin D plays a role in the natural history of cognitive dysfunction, including Alzheimer's disease (AD) and related disorders (ADRDs) [9-13].
Because of the rapidly accumulating and complex contribution of both basic and clinical research in this field, an invitational summit of leading experts was convened in order to (i) identify areas clearly supported by the literature, (ii) nuance findings that remain not proven, (iii) raise new research questions, and (iv) provide clear guidelines to the medical and scientific communities.

Consensus finding at the invitational summit of experts consisted of a three-step process. In the first step, in February 2013, the first author (CA) invited leading international experts, including physicians and scientists from a wide range of disciplines identified on the basis of their relevant publications and citations, to form an international task force. All invited experts accepted the need for a task force and agreed to meet at an invitational summit.
In the second step, all experts communicated by email with the first author to better identify respective areas of expertise, discuss unmet needs and potential learning objectives in the field, and propose a holistic approach to the issue of 'vitamin D and cognition' based on the expertise of all participants. After discussion, the following programme was approved by all: (i) neurosteroid properties of vitamin D (KLT and TS); (ii) contribution of transgenic animal models to understanding the neurological effects of vitamin D (AVK); (iii) vitamin D and ADRDs: lessons from animal models (FF); (iv) brain changes associated with hypovitaminosis D (CA); (v) polymorphisms of vitamin D receptors: clinical implication for human variants (ED and DGA); (vi) cognitive disorders and hypovitaminosis D: observational approach (DJL and TL); and (vii) vitamin D intake and cognition: interventional approach (OB).
In the third step, the task force met in person on 15 July 2013 at the invitational summit in Boston, MA, USA. After presentations relating to each aspect of the programme, group discussions were held to attempt to identify consensus and disagreements, in order to highlight knowledge gaps and to emphasize key messages for the scientific and medical communities. Finally the discussion focused on five key questions regarding the implications of vitamin D as a risk factor for ADRDs, as a diagnostic and/or prognostic biomarker of ADRDs, as an explanation of the variability of the clinical manifestations of ADRDs, and the potential benefits of vitamin supplementation D in the management of ADRDs (Table 1). The 10 experts voted on each key questions: 'yes' (agreement) or 'no' (disagreement). It was agreed that questions supported by >75% of 'yes' votes would be immediately accepted whereas those with <25% would be rejected outright. Others would be subjected to further discussion and subsequent voting, where >67% support or, in an eventual third round, a majority of >50% would be needed for acceptance. After the face-to-face meeting, the statements were distributed to the committee members by email for final comments. Only suggestions for improvements for clarity of wording or to address redundancies were considered, while changes to the meaning were not accepted.

In conclusion, this first task force on 'Vitamin D and Cognition in Older Adults' enabled international experts to reach agreement that hypovitaminosis D and the inefficient utilization of vitamin D increase the risk of cognitive decline/ADRDs in older adults and may alter the clinical presentation of the disease, particularly as a consequence of accompanying morbidities; however at present hypovitaminosis D should not be used as a diagnostic or a prognostic biomarker of cognitive decline/ADRDs due to lack of specificity and insufficient evidence. The experts also recommended measurement of serum 25OHD because of the high prevalence of hypovitaminosis D in this population and supplementation, if necessary. However this advice was not specific for ADRDs in the absence of well-conducted RCTs. Future studies should consider the effects of vitamin D on comorbidities, and explore the stimulating and/or protective effects of vitamin D on neurocognition at different stages of life. A stronger focus on the role of vitamin D-related genetic variance (e.g. in the genes encoding VDR, a-hydroxylase or VDBP) in humans will also be important. In parallel, conditional and tissue (e.g. brain)-specific VDR mutations are eagerly expected to assess their neurophenotypes. Critical evaluation (and bridging, if possible) the clinical and animal models using altered vitamin D systems available in the field (e.g. VDR-/-, developmental vitamin D deficit, acute and chronic vitamin D treatment or depletion) should also be carried out in order to best interpret neurocognitive and behavioural abnormalities associated with vitamin D deprivation. Focusing on the threshold concentration of 25OHD required to prevent these adverse events, and on the dose of supplementation required, will also be important.
Finally, it will be necessary to revise the current document in due course, probably within the next 3-5 years, when significant evidence is available regarding the different aspects of the recommendations. It is hoped that there will be an expansion of high-quality research activities that either corroborate or lead to modification of these recommendations.
REFERENCES are in attached PDF 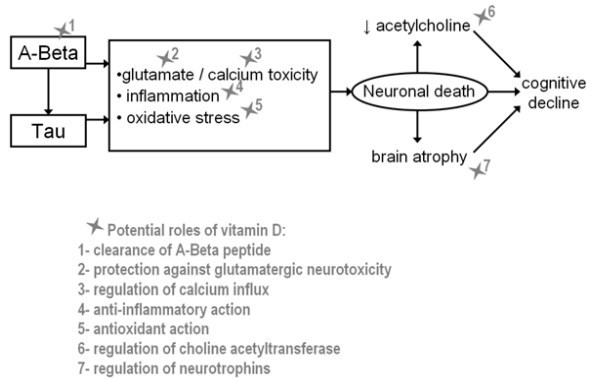 Fig. 1 Potential targets and neuroprotective roles of vitamin D during the natural history of Alzheimer's disease

Fig. 2 Relationship between vitamin D and Alzheimer's disease/vascular dementia: an overview of the different conditions, mechanisms and interactions that may be involved. Arrows represent the causal direction of the influences.

Fig. 3 Schematic diagram of the possible influences of vitamin D supplements on the balance between cognition (A) and comorbidities (B). See text for further details and examples.
Fig. 4 Schematic diagram of the evolution of neurocognitive health throughout life (A), and the possible influence of vitamin D at potential critical periods: prenatal (B), younger ages (C) and older ages (D). 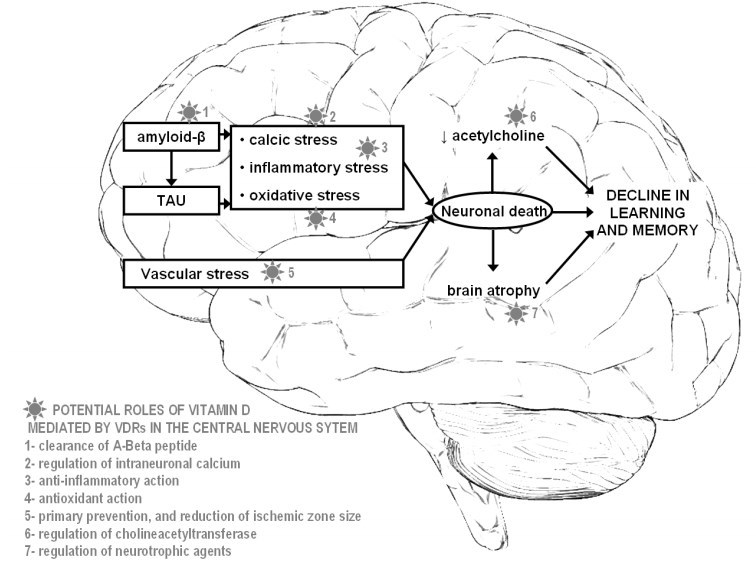 Overview Alzheimer's-Cognition and Vitamin D has the following summary


The TOP articles in Cognitive and Vitamin D are listed here:

Cognition and vitamin D – summary of expert opinions – July 2014         (Cached) Printer Friendly PDF this page! Follow this page for updates
This page is in the following categories (# of items in each category)
Top news 891 Cognitive 338