Note - this could be the result to two independant assocations

OBJECTIVES:
Insufficiency of 25-hydroxyvitamin D has been associated with cognitive impairment, particularly worse executive functioning. However, it remains unclear whether supratherapeutic levels (≥100 nmol L-1) are associated with even better performance than sufficient levels (defined as ≥50 nmol L-1 or even ≥75 nmol L-1). The current investigation sought to examine this question.

DISCUSSION:
Supratherapeutic levels of vitamin D were associated with significantly better performance on verbal fluency. Importantly, commonly used cutoff levels and sufficiency categories have been based on bone health and optimal levels for cognition are unknown. These findings suggest that levels exceeding 100 nmol L-1 may be optimal for at least some aspects of executive functioning.

Publisher charges $41 for the PDF 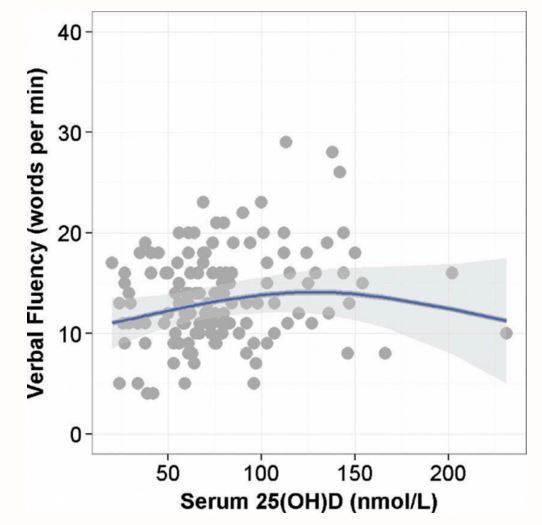 Study concluded “In conclusion, vitamin D levels exceeding 100 nmol/L (40 ng/ml) were found to be associated with significantly better performance on a verbal (phonemic) fluency task, which primarily assesses executive functioning. This implies that the optimal level for cognition is higher than that for bone health, and higher than previous studies have suggested. Spline analyses suggest that the relationship is not entirely linear, with an optimal level possibly around 120 nmol nmol/L (50 mg/ml).”

Increased word fluency associated with higher levels of vitamin D (40 ng and higher) – Dec 2015         (Cached) Printer Friendly PDF this page! Follow this page for updates
This page is in the following categories (# of items in each category)
Cognitive 326