Background” Population mental health surveillance is an important challenge limited by resource constraints, long time lags in data collection, and stigma. One promising approach to bridge similar gaps elsewhere has been the use of passively generated digital data.

Purpose: This article assesses the viability of aggregate Internet search queries for real-time monitoring of several mental health problems, specifically in regard to seasonal patterns of seeking out mental health information.

Methods: All Google mental health queries were monitored in the U.S. and Australia from 2006 to 2010. Additionally, queries were subdivided among those including the terms ADHD (attention deficit-hyperactivity disorder); anxiety; bipolar; depression; anorexia or bulimia (eating disorders); OCD (obsessive-compulsive disorder); schizophrenia; and suicide. A wavelet phase analysis was used to isolate seasonal components in the trends, and based on this model, the mean search volume in winter was compared with that in summer, as performed in 2012.

Results: All mental health queries followed seasonal patterns with winter peaks and summer troughs amounting to a 14% (95% CI=11%, 16%) difference in volume for the U.S. and 11% (95% CI=7%, 15%) for Australia. These patterns also were evident for all specific subcategories of illness or problem. For instance, seasonal differences ranged from 7% (95% CI=5%, 10%) for anxiety (followed by OCD, bipolar, depression, suicide, ADHD, schizophrenia) to 37% (95% CI=31%, 44%) for eating disorder queries in the U.S. Several nonclinical motivators for query seasonality (such as media trends or academic interest) were explored and rejected.

Conclusions: Information seeking on Google across all major mental illnesses and/or problems followed seasonal patterns similar to those found for seasonal affective disorder. These are the first data published on patterns of seasonality in information seeking encompassing all the major mental illnesses, notable also because they likely would have gone undetected using traditional surveillance. 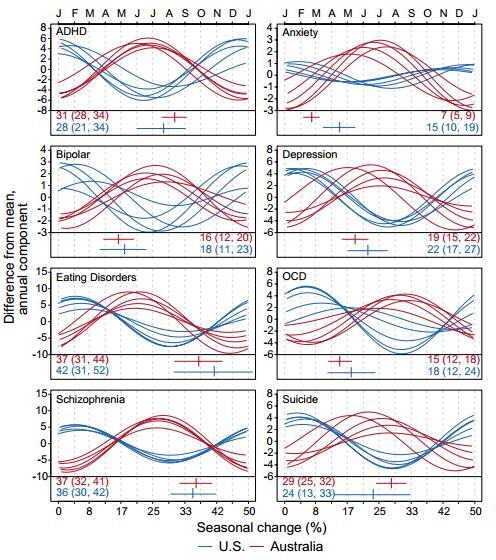 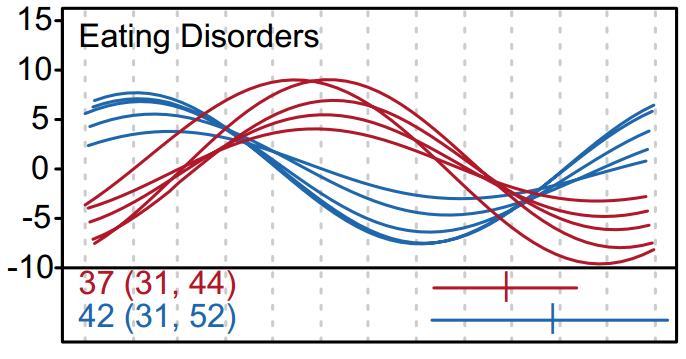 Schizophrenia: large change with season, consistent from year to year 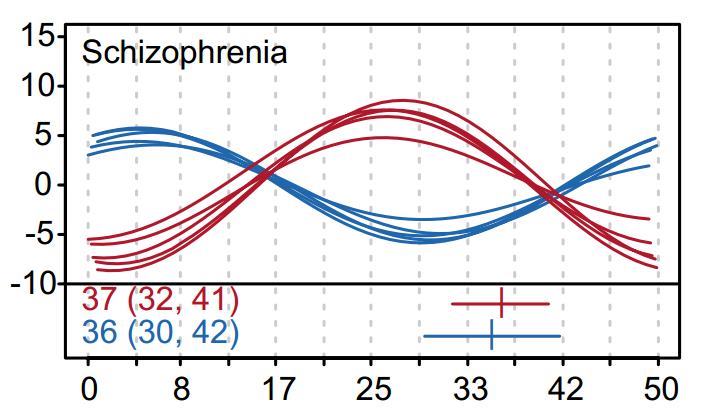 See also MedicalNewsToday on this study


PDF is attached at the bottom of this page

Eating disorder in late teen girls was 2.8X more likely if mom had low vitami...Mental Illness and Vitamin DMental health problems cut in half when have adequate level of vitamin D – Ja...Mental patients – 4 in 6 had under 12 ng of vitamin D, only 1 in 6 had over 2...Suicide 2X more likely with low vitamin D (in military) – Jan 2013Low vitamin D and depression - Study and meta-analysis, April 2013Increased incidence of depression – perhaps due to lower vitamin DChildren with mental disorders have somewhat less vitamin D levels (graph) Ja...VitaminDWiki News for May 2013