N-3 Polyunsaturated Fatty Acids through the Lifespan: Implication for Psychopathology

Omega-3 and Depression (items in both categories)

Omega-3 and Cognition (items in both categories)

Omega-3 and Inflamation (items in both categories) 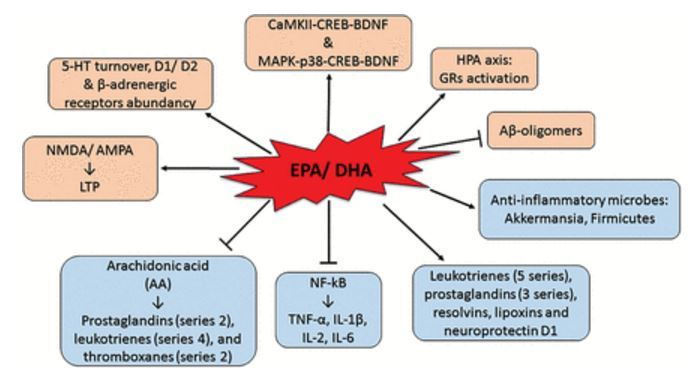 Objective: The impact of lifetime dietary habits and their role in physical, mental, and social well-being has been the focus of considerable recent research. Omega-3 polyunsaturated fatty acids as a dietary constituent have been under the spotlight for decades. Omega-3 polyunsaturated fatty acids constitute key regulating factors of neurotransmission, neurogenesis, and neuroinflammation and are thereby fundamental for development, functioning, and aging of the CNS. Of note is the fact that these processes are altered in various psychiatric disorders, including attention deficit hyperactivity disorder, depression, and Alzheimer’s disease.

Design: Relevant literature was identified through a search of MEDLINE via PubMed using the following words, “n-3 PUFAs,” “EPA,” and “DHA” in combination with

Conclusions: Although further studies are required, there is an exciting and growing body of research suggesting that omega-3 polyunsaturated fatty acids may have a potential clinical value in the prevention and treatment of psychopathologies.

Despite strong evidence pointing out an inverse correlation between n-3 PUFAs levels and quality of life/psychiatric diseases, the introduction of n-3 PUFAs in clinical practice is still in its infancy. The primary reason for this is largely because of inconsistent and inconclusive randomized clinical trials. Inadequate dosing, inadequate duration, and lack of placebo control are major weaknesses in many studies. Use of insensitive and inappropriate clinical rating measures is another cause for concern. Nonetheless, there are some clear recommendations emerging. Low habitual intake of n-3 PUFAs is associated with poorer mental health and, in children, low literacy ability. A major finding is the positive evidence within older healthy adults with age-related cognitive decline. They benefit most from consuming n-3 PUFAs, particularly DHA. However, with the development of senile dementia or Alzheimer’s disease, n-3 PUFAs lose efficacy. While MDD still remains one of the most discussed and investigated forms of psychopathology, a clear identification of n-3 PUFAs as a treatment or adjunct therapy has not yet emerged. The evidence base is still weak and RCTs have been inconsistent with many study design limitations. Hence, a major challenge ahead is to design and conduct rigorous RCTs to provide proper evidence of n-3 PUFA application in clinical conditions, such as MDD. Further studies are also required to definitively demonstrate that n-3 PUFAs reduce the risk of transit from a prepsychotic state to overt schizophrenia. On the other hand, n-3 PUFAs are safe and well-tolerated supplements with only mild transient side effects. Moreover, being considered as a “natural remedy” and due to their relatively low cost, n-3 PUFAs represent an appealing option for individuals. While the evidence is not entirely conclusive to make specific recommendations for dietary intake of n-3 PUFAs, the limited ability of synthesis of n-3 PUFAs de novo and their critical role in brain development and functioning make it reasonable to include n-3 PUFAs in a balanced daily diet.

Supplementation with Omega-3 Fatty Acids in Psychiatric Disorders: A Review of Literature Data.

A new application for omega-3 fatty acids has recently emerged, concerning the treatment of several mental disorders. This indication is supported by data of neurobiological research, as highly unsaturated fatty acids (HUFAs) are highly concentrated in neural phospholipids and are important components of the neuronal cell membrane. They modulate the mechanisms of brain cell signaling, including the dopaminergic and serotonergic pathways. The aim of this review is to provide a complete and updated account of the empirical evidence of the efficacy and safety that are currently available for omega-3 fatty acids in the treatment of psychiatric disorders. The main evidence for the effectiveness of eicosapentaenoic acid (EPA) and docosahexaenoic acid (DHA) has been obtained in mood disorders, in particular in the treatment of depressive symptoms in unipolar and bipolar depression. There is some evidence to support the use of omega-3 fatty acids in the treatment of conditions characterized by a high level of impulsivity and aggression and borderline personality disorders. In patients with attention deficit hyperactivity disorder, small-to-modest effects of omega-3 HUFAs have been found. The most promising results have been reported by studies using high doses of EPA or the association of omega-3 and omega-6 fatty acids. In schizophrenia, current data are not conclusive and do not allow us either to refuse or support the indication of omega-3 fatty acids. For the remaining psychiatric disturbances, including autism spectrum disorders, anxiety disorders, obsessive-compulsive disorder, eating disorders and substance use disorder, the data are too scarce to draw any conclusion. Concerning tolerability, several studies concluded that omega-3 can be considered safe and well tolerated at doses up to 5 g/day.

Printer Friendly PDF this page! Follow this page for updates
This page is in the following categories (# of items in each category)
Depression 209 Cognitive 284 Vitamin D and Omega-3 328 Inflammation 128 Bipolar 14
Edit Comments Files 3