Gave 50,000 IU of Vitamin D for 12 weeks
Most had a good response
The people with a poor response had a poor Bacteroidetes to Firmicutes ratio

Microbionome category listing has 27 items along with related searches 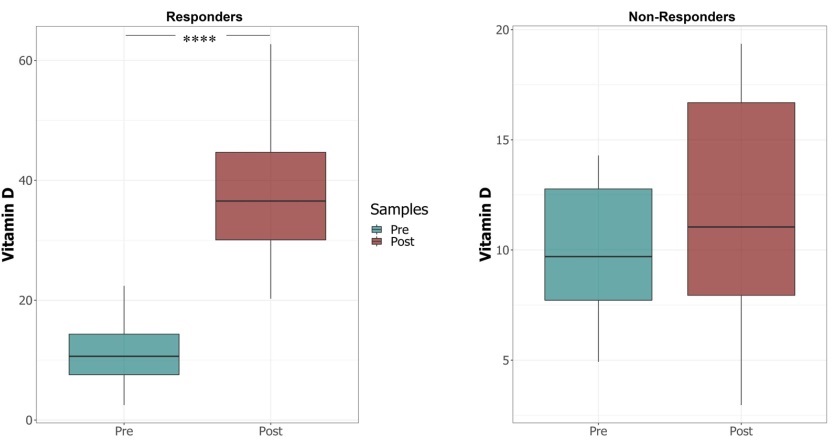 In addition to improving the Bacteroidetes to Firmicutes ratio, our data show that members of Verrucomicro- bia and Actinobacteria phyla also increased in abundance following vitamin D supplementation. Akkermansia muciniphila is the only representative of the phylum Verrucomicrobia in the human gut,56,57 and helps maintain host intestinal homeostasis by converting mucin into beneficial by-products58. The abundance of A. muciniphila negatively correlates with body mass 59,60 inflammation 61 metabolic syndrome 62 and both type 1 and type 2 diabetes 60,63. Our analysis also showed a significant increase in the abundance of Bifidobacterium which is an important probiotic with a wide array of benefits to human health64, as well as playing a role in folate and amino acid production65. Accordingly, using PICRUSt predictive functional analysis, we predicted an increased in genes involved in folate production and biosynthesis of several amino acids following vitamin D supplementation.
Alongside characterising individual taxa, Wu et al. clustered fecal communities into two enterotypes distinguished primarily by the levels of Bacteroides and Prevotella, and found that vitamin D intake was negatively associated with abundance of the Prevotella enterotype, instead being strongly positively associated with the Bacteroides enterotype66. In line with this, we found that vitamin D supplementation favoured a Bacteroides- dominated enterotype over Prevotella. This is potentially important as several studies indicate Prevotella as an intestinal pathobiont: high levels of Prevotella spp. have been reported in children diagnosed with irritable bowel syndrome67; while the expansion of Prevotella copri was strongly correlated with enhanced susceptibility to arthritis68.Taken together, our results make a compelling argument that vitamin D supplementation modulates the gut microbiota composition and diversity towards a more beneficial state—a previously undescribed benefit of vitamin D.
At present, the mechanism underlying vitamin D regulation of the gut microbiota is not clear. One possibility is that, following absorption in the small intestine1, vitamin D could impact gut microbial communities via indirect systemic mechanisms; for example, the vitamin D receptor (VDR) is highly expressed in the proximal colon and acts as a transcription factor regulating expression of over 1000 host genes involved in intestinal homeostasis and inflammation, tight junctions, pathogen invasion, commensal bacterial colonization, and mucosal defense70, including the defensins, cathelicidin, claudins, TLR2, zonulin occludens, and NOD269,70. Interestingly, there is some recent evidence of the cross talk between the gut microbiota and VDR signalling affecting host responses and inflammation, and this appears to be bidirectional9. Intestinal VDR expression has been shown to regulates the host microbiota to mediates the beneficial effects of probiotics71,72 and vitamin D treatment72-75. Similarly, probiotics and pathogenic bacteria have been also shown to modulate VDR expression, with the former increasing76, and the latter decreasing77, its expression.

Alternatively, or alongside such systemic mechanisms, growing evidence suggests that vitamins administered in large doses escape complete absorption by the proximal intestine 78, and so might then be available to directly modulate the distal gut microbiome. Whether this is the case for the vitamin D remains to be investigated; however, such a mechanism might account for the differences in microbiota change seen in various studies employing high versus low dose supplementation protocols.

Interestingly, in our study microbial functional potentials inferred using PICRUSt indicated that vitamin D supplementation elevated pathways associated with the metabolism of amino acids, cofactors, vitamins, and lipids, including steroid biosynthesis and fatty acid elongation. This could be important as adequate concentrations of lipids, bile salts and fatty acids are required for incorporation of fat-soluble vitamin D into mixed micelles, as a prerequisite for its absorption 79,80. Thus, increased abundance of bacterial genes related to lipid and fatty acid metabolism post supplementation could indicate increased vitamin D bioavailability and absorption in the gut81.
While the benefits of vitamin D supplementation in deficient/insufficient level individuals are clear, there are a sub-group of people in which even high-dose oral vitamin D supplementation has been shown to be ineffective. A secondary aim of this study was to assess whether the microbiota in these individuals could be associated with their non-responder status. Lower levels of baseline Bacteroides acidifaciens in non-responders combined with an additional depletion post-supplementation suggest that this bacterium may be linked with response to vitamin D supplementation. Bacteroides acidifaciens has previously been proposed as a “lean bug” that could prevent obesity and improve insulin sensitivity82. It is also one of the predominant commensal bacteria that promote IgA antibody production in the large intestine. Thus, we hypothesize that the vitamin D supplementation promotes the ‘farming’ of good bacteria in order to maintain immune-microbe homeostasis.

While results from this study are promising and warrant more research, it is worth noting that our study has few limitations. Firstly, we did not have vitamin D sufficient controls to observe the impact of vitamin D supplementation in comparison with the deficient subjects. Secondly, addition of a placebo group would minimize the potential effects of non-treatment factors. Lastly, experimental studies with larger cohort needs to be undertaken to have sufficient representation of study responders/non-responders to confirm the finding of the present study.

In conclusion, vitamin D supplementation of deficient/insufficient otherwise healthy females changed the composition and diversity of the gut microbiota, eliciting a beneficial effect by improving health-promoting taxa along with clinical biomarkers for kidney and liver function. Our study also provides a proof-of-concept that the gut microbiota is informative in examining individualized responses to vitamin D supplementation, presenting a rationale for planning future clinical trials that focus on the inter and intra individual variation using multi- omics approaches such as genotyping, transcriptomics and proteomics.

Items in both categories Genetics and Predict Vitamin D

Poor absorption of Vitamin D is strongly related to type of gut bacteria – Dec 2020         Printer Friendly PDF this page! Follow this page for updates
This page is in the following categories (# of items in each category)
Predict Vitamin D 74 Microbiome 27