Many ways to get vitamin D if gallbladder had been removed or is functioning poorly
Gut friendly Vitamin D, sublingual, topical, from the sun, from UV lamps, etc
Perhaps also water soluable Vitamin D, such as from Bio-Tech 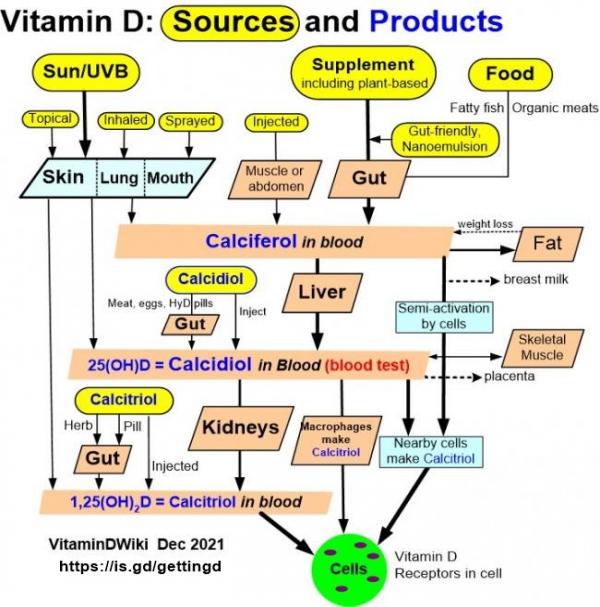 This study compared the 25-hyrdoxyvitamin (OH) D and bone mineral density (BMD) values of patients with and without cholecystectomy. Although 25(OH) D levels were significantly lower in the cholecystectomy group (12.1 ± 6.2 vs. 15.6 ± 6.6 ng/mL), no significant difference was observed between the groups in terms of BMD measurements.

METHODS:
This study was a single-center and case-control trial. The cholecystectomy group comprised the patients with a history of cholecystectomy. In addition, a healthy control group without history of cholecystectomy was defined. All patients were selected consecutively from the patients who admitted to the outpatient clinics of physical and rehabilitation medicine or internal medicine between the June 2016 and August 2016. The patients were ambulatory and did not receive any osteoporosis treatment before. Chemiluminescence microparticle immunoassay method was used for 25(OH) D measurements. Dual-energy X-ray absorptiometry was used for the BMD evaluations.

CONCLUSION: In the light of our results, cholecystectomy patients seem to have lower level of 25(OH) D levels in comparison with healthy subjects, but both groups have similar BMD values. Further studies in cohort designs taking into account the bone formation and resorption markers are awaited.

http://www.surgery.com/procedure/gallstone-removal/demographics
Gallstones are approximately two times more common in females than in males. Overweight women in their middle years constitute the vast majority of patients with gallstones in every racial or ethnic group. An estimated 10% of the general population... has gallstones. The prevalence for women between ages 20 and 55 varies from 5–20%, and is higher after age 50 (25–30%). The prevalence for males is approximately half that for women in a given age group. Certain people, in particular the Pima tribe of Native Americans in Arizona, have a genetic predisposition to forming gallstones. Scandinavians also have a higher than average incidence of this disease.

Diarrhea (and poor digestion of Vitamin D, Magnesium, etc) after gallbladder removal varies from 1 in 3 to 1 in 100

Mayo http://www.mayoclinic.com/health/gallbladder-removal/AN00067
Studies have found as few as 1 in 100 people undergoing gallbladder surgery or as many as 1 in 3 develops diarrhea.
In most cases, the diarrhea resolves soon after the surgery. Rarely, it may last for years.

Rats without any bile had virtually zero vitamin D absorption - 1987

Note to those with poorly functioning guts:

All items in category Gut and Vitamin D 174 items

Gallbladder removal and vitamin D deficiency         Printer Friendly PDF this page! Follow this page for updates
This page is in the following categories (# of items in each category)
Health 95 Gut 174

50,000 IU of dry vitamin D needed at least daily following obesity surgery – ...Eskimos evolved to get and limit Vitamin D from foodGallbladder performs poorly during pregnancy if low vitamin D – May 2015Highlights of Vitamin D WikiHow to read a medical study (with notes on Vitamin D studies) – Oct 2019Increased visibility for VitaminDWiki pagesIntestinal absorption of vitamin D - a systematic review - Aug 2017Most read pages on VitaminDWikiPoor absorption of Vitamin D is strongly related to type of gut bacteria – De...Pregnancy needs at least 40 ng of vitamin D, achieved by at least 4,000 IU – ...Reasons for low response to vitamin DReasons for Low Vitamin D and what to doResponse to Vitamin D - GrassrootsVitamin D Myths - OTHER