Brain Health across the Lifespan: A Systematic Review on the Role of Omega-3 Fatty Acid Supplements.

Items in both categories Cognitive and Omega-3 are listed here:

Items in both categories ADHD and Omega-3 are listed here:

Items in both categories Autism and Omega-3 are listed here:


Chart is online, but not in the PDF 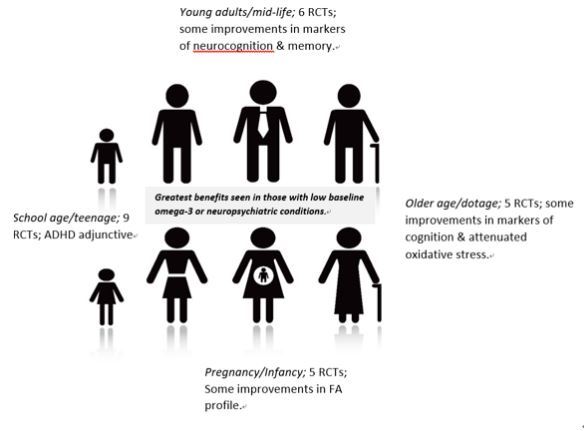 The brain is the most significant and complex organ of the human body. Increasingly, we are becoming aware that certain nutrients may help to safeguard brain health. An expanse of research has investigated the effects of omega fatty acids in relation to brain health but effects across the lifespan have not been widely evaluated.
The present systematic review collated evidence from 25 randomized controlled trials (n = 3633) published since 2013. Compared with control groups, omega-3 supplementation generally correlated with improvements in blood biomarkers. Subsequently, these appear to benefit those with lower baseline fatty acid levels, who are breastfeeding or who have neuropsychiatric conditions. Whilst multiple studies indicate that omega fatty acids can protect against neurodegeneration in older adults, more work is needed in the years preceding the diagnosis of such medical conditions. Bearing in mind the scale of ageing populations and rising healthcare costs linked to poor brain health, omega supplementation could be a useful strategy for helping to augment dietary intakes and support brain health across the lifespan. Ongoing research is now needed using harmonious methodologies, supplement dosages, ratios and intervention periods to help formulate congruent conclusions.

There is a strong body of evidence signifying that omega-3 fatty acids from dietary sources are under consumed. For example, systematic evidence from 53 studies across 17 different European countries shows that mean intakes of EPA and DHA are only consumed as recommended in 26% of countries, indicating that intakes are largely suboptimal [55]. Evidence from the US National Health and Nutrition Examination Survey (NHANES) survey similarly shows that childbearing aged women are eating seafood in amounts significantly lower than the Dietary Guidelines for Americans contributing to low habitual intakes of EPA and DHA [56].
Along with concerns over inadequate EPA and DHA intakes, interest in the "preservation" of brain health is emerging [3,55]. The American Heart Association/American Stroke Association has identified the risks of poor brain health as being similar and closely associated to those of cardiovascular disease [3]. Within their practical considerations, seven key ideal health behaviors are identified which include: not smoking, physical activity, a healthy body mass index (BMI), blood pressure, blood glucose, cholesterol levels and diet aligned with current healthy eating guidelines [3]. Increasingly, mindfulness is also being seen as a useful adjunctive therapy amongst those with ADHD [57,58] with this strategy also appearing to help reduce stress amongst older adults with memory complaints [59].
From a dietary perspective, findings from RCTs showed that omega fatty acid supplementation could help to reinforce habitual intakes by raising blood levels. For example, improvements in lipid profiles were observed in at least seven studies [30,34,36,37,49,52,53]. Certain subgroups such as those with lower baseline blood fatty acids levels [40,45,50], who are breastfeeding infants [34,36] or who have neuropsychiatric conditions such as ADHD, ASD or depression, also appear to benefit more strongly from omega use [29,31,35,39,54].
Most studies focused on the role of omega fatty acids in children and teenagers [30-33,35-37,39]. Of these, the majority were conducted on children with ADHD or ASD [29,31,35,49] whilst two trials focused on mainstream children [38,39]. Omega fatty acids were found to improve ADHD symptoms and fatty acid profiles [31,35,49]. Amongst mainstream school children, 3-months of Omega 3/6 treatment improved reading ability - specifically the clinically relevant "phonologic decoding time" and "visual analysis time", with children with attention problems again showing particular benefits [39].
In the case of older adults, a number of studies alluded that omega fatty acids could help to protect against neurodegeneration and the chances of developing cognitive impairment [44,48,50-53]. Similar conclusions have been formulated in other reviews, reflecting the current strength of the evidence base [60,61]. Whilst some research has looked into markers of brain health in the middle years of life, outcomes studied varied and findings were not strong enough to warrant any firm conclusions.

(Cached) Printer Friendly PDF this page! Follow this page for updates
This page is in the following categories (# of items in each category)
Cognitive 287 Vitamin D and Omega-3 329
Edit Comments Files 2