Males with low serum levels of vitamin D have lower pregnancy rates when ovulation induction and timed intercourse are used as a treatment for infertile couples: results from a pilot study

Background: Vitamin D (Vit D) is important for the regulation of reproductive physiology. In humans, maternal Vit D deficiency has been implicated in several reproductive- and pregnancy-related disorders. Very few data are available regarding the Vit D status in male partners of couples attempting pregnancy. This observational study (IRB Prot. N. 078/13) aimed to evaluate whether low Vit D serum levels in males might decrease the rate of successful conception in couples attempting pregnancy.

Methods: Male and female partners of infertile couples (n = 102) were classified into 2 GROUPS according to normal (>30 ng/ml) or low (below 30 ng/ml) serum Vit D levels in male partners. Semen analysis was performed in each male participant based on the WHO reference criteria. The female partners of both groups were subjected to 3 consecutive cycles of gonadotropin-induced mono-ovulation. The main outcome measures included the clinical pregnancy rate, delivery per patient and per cycle, and miscarriage rate between the 2 groups evaluated at the end of the three-month period of the study.

Conclusions: These results suggest the existence of a relationship between male Vit D serum levels and semen ability to begin a pregnancy during cycles of timed vaginal intercourse. 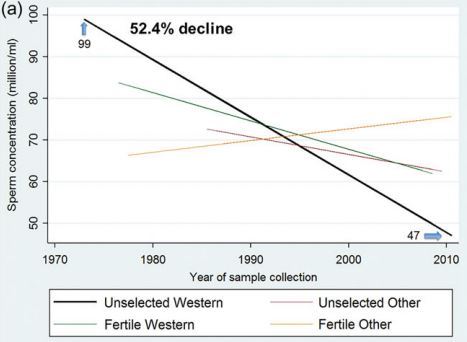 Male fertility 4 X higher if high Vitamin D – Nov 2015         Printer Friendly PDF this page! Follow this page for updates
This page is in the following categories (# of items in each category)
Fertility and sperm 127 Top news 891