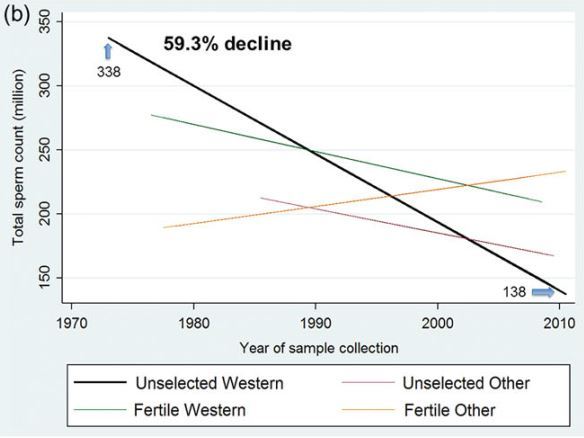 BACKGROUND: Reported declines in sperm counts remain controversial today and recent trends are unknown. A definitive metaanalysis is critical given the predictive value of sperm count for fertility, morbidity and mortality.

OBJECTIVE AND RATIONALE: To provide a systematic review and meta-regression analysis of recent trends in sperm counts as measured by sperm concentration (SC) and total sperm count (TSC), and their modification by fertility and geographic group.

SEARCH METHODS: PubMed/MEDLINE and EMBASE were searched for English language studies of human SC published in 1981-2013. Following a predefined protocol 7518 abstracts were screened and 2510 full articles reporting primary data on SC were reviewed. A total of 244 estimates of SC and TSC from 185 studies of 42 935 men who provided semen samples in 1973-2011 were extracted for meta-regression analysis, as well as information on years of sample collection and covariates [fertility group (‘Unselected by fertility’ versus ‘Fertile’), geographic group (‘Western’, including North America, Europe Australia and New Zealand versus ‘Other’, including South America, Asia and Africa), age, ejaculation abstinence time, semen collection method, method of measuring SC and semen volume, exclusion criteria and indicators of completeness of covariate data]. The slopes of SC and TSC were estimated as functions of sample collection year using both simple linear regression and weighted meta-regression models and the latter were adjusted for predetermined covariates and modification by fertility and geographic group. Assumptions were examined using multiple sensitivity analyses and nonlinear models.

WIDER IMPLICATIONS: This comprehensive meta-regression analysis reports a significant decline in sperm counts (as measured by SC and TSC) between 1973 and 2011, driven by a 50-60% decline among men unselected by fertility from North America, Europe, Australia and New Zealand. Because of the significant public health implications of these results, research on the causes of this continuing decline is urgently needed.

Total sperm counts in North America, Europe, Australia and New Zealand dropped by nearly 60 percent between 1973 and 2013 and there’s no evidence to suggest this downward trend is leveling off Mercola Sept 2018

Printer Friendly PDF this page! Follow this page for updates
This page is in the following categories (# of items in each category)
Fertility and sperm 106 Meta-analysis of Vitamin D 456 Top news 808
Edit Files 2