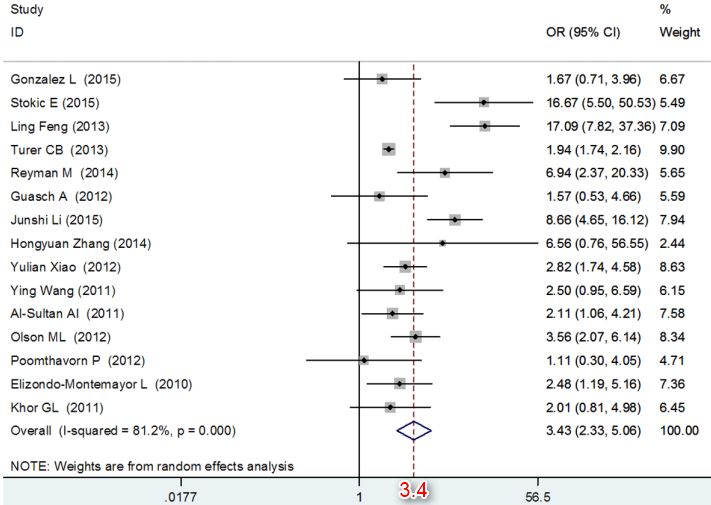 Previous epidemiologic studies suggested that vitamin D deficiency may be a risk factor of obesity. However, the result is still controversial. This meta-analysis aims to provide a comprehensive summary on the association between vitamin D deficiency and obesity. We systematically searched Pubmed database, Chinese Wanfang Data Knowledge Service Platform, and Chinese National Knowledge Infrastructure (CNKI), for the literatures on the relationship between vitamin D deficiency and obesity published from 2010 to 2015. The effect sizes of overall odds ratio (OR) and 95% confidence interval (CI) were estimated using Stata 11.0. Heterogeneity was evaluated using random-effects model and forest plots. Fifteen studies were eligible for inclusion in the meta-analysis, which included 3867 subjects with obesity and 9342 health subjects. Meta-analysis results showed that the prevalence of vitamin D deficiency was difference between obesity group and control group, and the pooled OR (95% CI) was 3.43 (2.33-5.06).

Note that definition of deficiency varied at lot between the studies 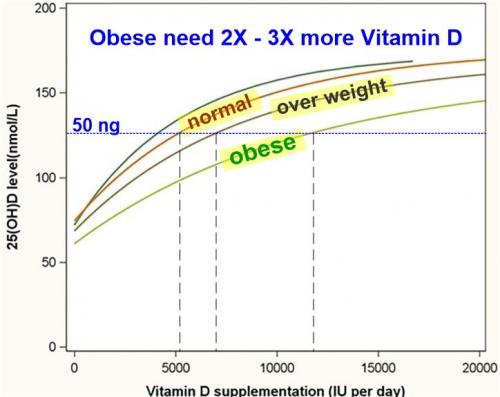 The Meta-analysis of Obesity and Vitamin D

All items in categories Intervention AND Obesity

Obese are 3.4 X more likely to be Vitamin D deficient – meta-analysis Sept 2015         Printer Friendly PDF this page! Follow this page for updates
This page is in the following categories (# of items in each category)
Obesity 396 Meta-analysis of Vitamin D 582 Women 180