2 items by A Rosanoff

Suboptimal magnesium status in the United States: are the health consequences underestimated?

In comparison with calcium, magnesium is an "orphan nutrient" that has been studied considerably less heavily. Low magnesium intakes and blood levels have been associated with type 2 diabetes, metabolic syndrome, elevated C-reactive protein, hypertension, atherosclerotic vascular disease, sudden cardiac death, osteoporosis, migraine headache, asthma, and colon cancer. Almost half (48%) of the US population consumed less than the required amount of magnesium from food in 2005-2006, and the figure was down from 56% in 2001-2002. Surveys conducted over 30 years indicate rising calcium-to-magnesium food-intake ratios among adults and the elderly in the United States, excluding intake from supplements, which favor calcium over magnesium.

The prevalence and incidence of type 2 diabetes in the United States increased sharply between 1994 and 2001
as the ratio of calcium-to-magnesium intake from food rose from <3.0 to >3.0. 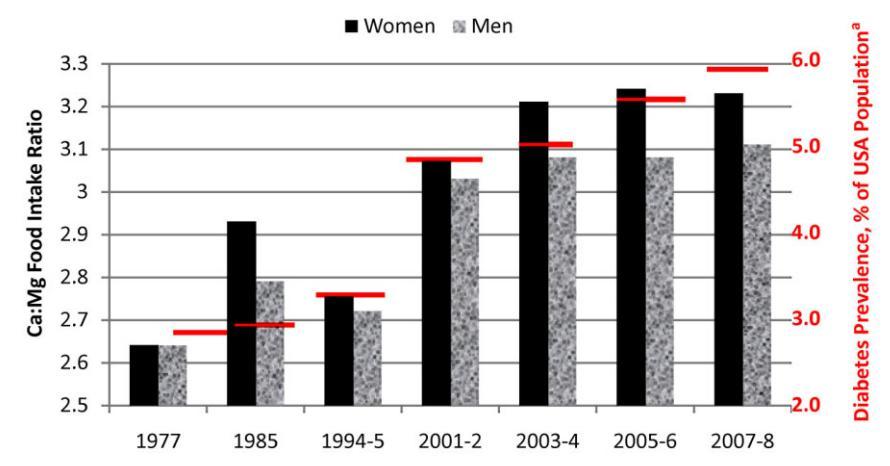 __The Missing Mineral—Magnesium (The Strong Link of Low Nutritional Magnesium and High Calcium-to-Magnesium Ratio in the Genesis of Cardiovascular Disease) A Review of the Peer-Reviewed Science
by A. Rosanoff, PhD, Director of Research & Science Information Outr__each Center for Magnesium Education & Research, Pahoa, HI

Hypothesis: Decreasing Magnesium and increasing CaMg ratio are increasing health problems – 2012 - 2013         Printer Friendly PDF this page! Follow this page for updates
This page is in the following categories (# of items in each category)
Cardiovascular 459 Diabetes 500 Vitamin D and Magnesium 316