Magnesium may be an important way to treat brain trauma

Your bones are 2:1 calcium/magnesium ratio while your brain is more like 2:1 Mg:Ca

Observations by VitaminDWiki
Appears that Magnesium, as a monotherapy, does not help TBI in clinical trials
Wonder if Vitamin D might aid Magnesium, In various other places in the body vitamin D increases the utilization of Magnesium
Wonder what types of Magnesium were used in the clinical trials
Wonder if they tried spreading the Magnesium dose over a period of time, or if they just got a toxic reaction due to too much all a time

A review of neuroprotection pharmacology and therapies in patients with acute traumatic brain injury.

Traumatic brain injury (TBI) affects 1.6 million Americans annually. The injury severity impacts the overall outcome and likelihood for survival. Current treatment of acute TBI includes surgical intervention and supportive care therapies. Treatment of elevated intracranial pressure and optimizing cerebral perfusion are cornerstones of current therapy. These approaches do not directly address the secondary neurological sequelae that lead to continued brain injury after TBI. Depending on injury severity, a complex cascade of processes are activated and generate continued endogenous changes affecting cellular systems and overall outcome from the initial insult to the brain. Homeostatic cellular processes governing calcium influx, mitochondrial function, membrane stability, redox balance, blood flow and cytoskeletal structure often become dysfunctional after TBI. Interruption of this cascade has been the target of numerous pharmacotherapeutic agents investigated over the last two decades. Many agents such as selfotel, pegorgotein (PEG-SOD), magnesium, deltibant and dexanabinol were ineffective in clinical trials. While progesterone and ciclosporin have shown promise in phase II studies, success in larger phase III, randomized, multicentre, clinical trials is pending. Consequently, no neuroprotective treatment options currently exist that improve neurological outcome after TBI. Investigations to date have extended understanding of the injury mechanisms and sites for intervention. Examination of novel strategies addressing both pathological and pharmacological factors affecting outcome, employing novel trial design methods and utilizing biomarkers validated to be reflective of the prognosis for TBI will facilitate progress in overcoming the obstacles identified from previous clinical trials.

Use of magnesium in traumatic brain injury.

Depletion of magnesium is observed in animal brain and in human blood after brain injury. Treatment with magnesium attenuates the pathological and behavioral changes in rats with brain injury; however, the therapeutic effect of magnesium has not been consistently observed in humans with traumatic brain injury (TBI). Secondary brain insults are observed in patients with brain injury, which adversely affect clinical outcome. Systemic administration studies in rats have shown that magnesium enters the brain; however, inducing hypermagnesemia in humans did not concomitantly increase magnesium levels in the CSF. We hypothesize that the neuroprotective effects of magnesium in TBI patients could be observed by increasing its brain bioavailability with mannitol. Here, we review the role of magnesium in brain injury, preclinical studies in brain injury, clinical safety and efficacy studies in TBI patients, brain bioavailability studies in rat, and pharmacokinetic studies in humans with brain injury. Neurodegeneration after brain injury involves multiple biochemical pathways. Treatment with a single agent has often resulted in poor efficacy at a safe dose or toxicity at a therapeutic dose. A successful neuroprotective therapy needs to be aimed at homeostatic control of these pathways with multiple agents. Other pharmacological agents, such as dexanabinol and progesterone, and physiological interventions, with hypothermia and hyperoxia, have been studied for the treatment of brain injury. Treatment with magnesium and hypothermia has shown favorable outcome in rats with cerebral ischemia. We conclude that coadministration of magnesium and mannitol with pharmacological and physiological agents could be an effective neuroprotective regimen for the treatment of TBI.

Magnesium in acute and chronic brain injury: an update.

While brain free magnesium levels have been shown to decline in a number of acute and chronic brain pathologies, the mechanisms of such decline and the potential for magnesium administration as a therapeutic intervention are still unclear. In acute brain injury, magnesium therapy has failed in recent clinical trials of trauma, presumably because of an intact blood brain barrier at the time of administration reducing central penetration. Under such conditions, magnesium's peripheral effects on cardiovascular parameters may dominate over the central, and potentially neuroprotective, effects of the compound. In contrast, magnesium has been demonstrated to be beneficial in lacunar strokes, albeit that recent animal studies indicate that this effect is without any significant reduction of lesion size. Postnatal magnesium has also been shown to improve neurological outcome in term neonates with perinatal asphyxia, although this may be limited to cases of mild to moderate brain injury; no effect is observed following severe brain injury. Prenatal magnesium has been reported to be beneficial for outcome in very preterm infants, although this may only be at low doses. Combination therapies are also showing promise in experimental studies, with combined magnesium and mild hypothermia as well as magnesium and polyethylene glycol proving effective in ischemic stroke and in spinal cord injury, respectively. With respect to chronic brain injury, recent results indicate that magnesium deficient mice are susceptible to developing Parkinson's disease, which is consistent with earlier findings that magnesium deficiency over a number of generations is associated with the development of Parkinson's disease. The latter was associated with the appearance of variants of the TRPM channels. Our recent studies have shown that Parkinson's disease is associated with reduced TRPM2 and TRPM7 channel mRNA expression. Taken together, a more complete picture is emerging of the role of magnesium in brain injury, its therapeutic potential as well the mechanisms associated with its decline.

BACKGROUND: Acute traumatic brain injury is a leading cause of death and disability in young adults. Numerous pharmacological and non-pharmacological tools have been investigated and considered as potential mechanisms for improving neurological outcome. Magnesium has been considered as one of these potential therapeutic tools because of its activity on NMDA-receptors, calcium channels and neuron membranes. Animal studies have indicated a beneficial effect of magnesium on outcome after brain injury, but its efficacy in humans is unknown.

OBJECTIVES: To quantify the effect of magnesium administration on mortality and morbidity in patients with acute traumatic brain injury.

SELECTION CRITERIA: We included all randomized controlled trials comparing any magnesium salt with no magnesium or with placebo, in patients following acute traumatic brain injury.

AUTHORS' CONCLUSIONS: There is currently no evidence to support the use of magnesium salts in patients with acute traumatic brain injury.

Prolonged elevation of magnesium in the cerebrospinal fluid of patients with severe head injury.

OBJECTIVES: Several works have investigated the role of serum magnesium (Mg) concentrations in traumatic brain injury. However, there is restricted information about cerebrospinal fluid (CSF) levels of Mg in patients with severe head injury (SHI). We assessed the changes of Mg concentrations in CSF and serum in patients with SHI during the first 10 days after the trauma.

METHODS: Eleven patients with SHI were studied prospectively on days 1-3, 5 and 10 with analysis of CSF and serum levels of Mg and Ca. The control group consisted of nine patients with hydrocephalus.

RESULTS: CSF levels of Mg were significantly higher in patients than controls in the corresponding time points except on days 5 and 10 of trauma. The CSF Mg levels tended to decrease and the highest level was found on day 1 after trauma (2.81 +/- 0.65 mg/dl). In the control group, the CSF level of Mg was 1.95 +/- 0.66 mg/dl. No significant difference can be detected between controls and patients regarding serum Mg and Ca levels. In addition, significantly higher values of Ca in the CSF were observed in all time points after trauma in patients with SHI than in the controls. There was no correlation between the CSF and serum levels of Mg and Ca levels.

When basic research doesn't translate to the bedside--lessons from the magnesium brain trauma study.

METHODS: In a double-blind trial, 499 patients aged 14 years or older admitted to a level 1 regional trauma centre between August, 1998, and October, 2004, with moderate or severe traumatic brain injury were randomly assigned one of two doses of magnesium or placebo within 8 h of injury and continuing for 5 days. Magnesium doses were targeted to achieve serum magnesium ranges of 1.0-1.85 mmol/L or 1.25-2.5 mmol/L. The primary outcome was a composite of mortality, seizures, functional measures, and neuropsychological tests assessed up to 6 months after injury. Analyses were done according to the intention-to-treat principle. This trial is registered with , number .

FINDINGS: Magnesium showed no significant positive effect on the composite primary outcome measure at the higher dose (mean=55 average percentile ranking on magnesium vs 52 on placebo, 95% CI for difference -7 to 14; p=0.70). Those randomly assigned magnesium at the lower dose did significantly worse than those assigned placebo (48 vs 54, 95% CI -10.5 to -2; p=0.007). Furthermore, there was higher mortality with the higher magnesium dose than with placebo. Other major medical complications were similar between groups, except for a slight excess of pulmonary oedema and respiratory failure in the lower magnesium target group. No subgroups were identified in which magnesium had a significantly positive effect.

INTERPRETATION: Continuous infusions of magnesium for 5 days given to patients within 8 h of moderate or severe traumatic brain injury were not neuroprotective and might even have a negative effect in the treatment of significant head injury.

The Neurometabolic Cascade of Concussion. {Recommended by Dr. McCarthy}

OBJECTIVE: To review the underlying pathophysiologic processes of concussive brain injury and relate these neurometabolic changes to clinical sports-related issues such as injury to the developing brain, overuse injury, and repeated concussion.

DATA SOURCES: Over 100 articles from both basic science and clinical medical literature selected for relevance to concussive brain injury, postinjury pathophysiology, and recovery of function.

DATA SYNTHESIS: The primary elements of the pathophysiologic cascade following concussive brain injury include abrupt neuronal depolarization, release of excitatory neurotransmitters, ionic shifts, changes in glucose metabolism, altered cerebral blood flow, and impaired axonal function. These alterations can be correlated with periods of postconcussion vulnerability and with neurobehavioral abnormalities. While the time course of these changes is well understood in experimental animal models, it is only beginning to be characterized following human concussion.

CONCLUSIONS/RECOMMENDATIONS: Following concussion, cerebral pathophysiology can be adversely affected for days in animals and weeks in humans. Significant changes in cerebral glucose metabolism can exist even in head-injured patients with normal Glasgow Coma Scores, underscoring the need for in-depth clinical assessment in an effort to uncover neurocognitive correlates of altered cerebral physiology. Improved guidelines for clinical management of concussion may be formulated as the functional significance and duration of these postinjury neurometabolic derangements are better delineated. 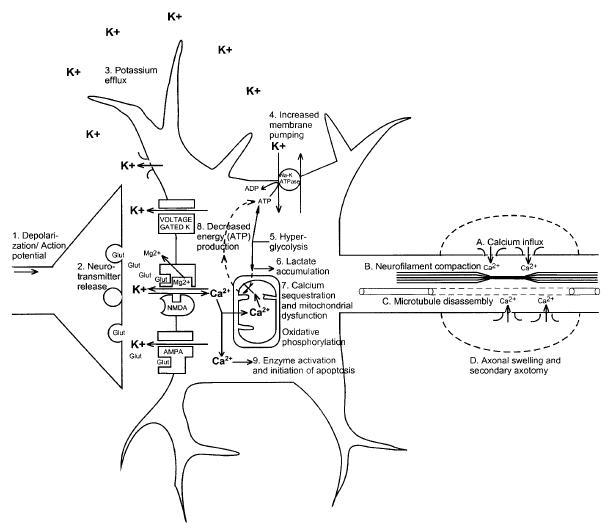 Intracellular magnesium levels are also immediately reduced after TBI and remain low for up to 4 days.59–62
This reduction in magnesium has been correlated with postinjury neurologic deficits, and pretreatment to restore magnesium levels results in improved motor performance in experimental animals.63 Decreased magnesium levels may lead to neuronal dysfunction via multiple mechanisms. Both glycolytic and oxidative generation of ATP are impaired when magnesium levels are low. Magnesium is necessary for maintaining the cellular membrane potential and initiating protein synthesis. Finally, low levels of magnesium may effectively unblock the NMDA receptor channel more easily, leading to greater influx of Ca2+ and its potentially deleterious intracellular consequences."

Magnesium may be an important way to treat brain trauma         Printer Friendly PDF this page! Follow this page for updates
This page is in the following categories (# of items in each category)
Vitamin D and Magnesium 296 Trauma and surgery 303 Cognitive 324