Associations of serum and urinary magnesium with the pre-diabetes, diabetes and diabetic complications in the Chinese Northeast population.

The effect of magnesium (Mg) deficiency on the prevalence of diabetes and diabetic complications has received a great attention. The present study investigated the association of Mg level in the serum or urine of the patients, lived in the Northeast areas of China, with either pre-diabetes or diabetes with and without complications. From January 2010 to October 2011, patients with type 1 diabetes (T1D, n = 25), type 2 diabetes (T2D, n = 137), impaired fasting glucose (IFG, n = 12) or impaired glucose tolerance (IGT, n = 15), and age/gender matched control (n = 50) were enrolled in the First Hospital of Jilin University. In T2D group, there were 24, 34, and 50 patients with nephropathy, retinopathy or peripheral neuropathy. Serum Mg levels in the patients with IGT, IFG, T2D, and T1D were significantly lower than that of control. The urinary Mg levels were significantly increased only in T2D and T1D patients compared to control. There was no difference for these two changes among T2D with and without complications; In addition, there was a significantly positive correlation of serum Mg levels with serum Ca levels only in T2D patients, and also a significantly positive correlation of urinary Mg levels with urinary Ca levels in control, IGT patients, and T2D patients. Simvastatin treatment in T2D patients selectively reduced serum Ca levels and urinary Mg levels. These results suggest that the potential impact of Mg deficiency on metabolic syndrome, diabetes and diabetic complications needs to be received special attention.

Chart from Study of Ca/Mg relationship in the blood 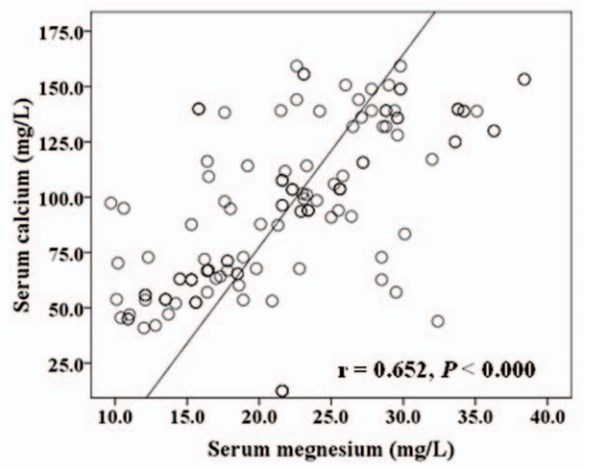 Correlation of reduced serum Mg level with diabetes have been extensively reported [20], [21], but there were also a few studies that did not show such correlation [14], [15]. By directly measuring serum and urinary Mg here we demonstrated the significantly low serum Mg level not only in T2D, but also in IFG, IGT, and T1D. Our study is inconsistent with a recent study [22]. They recruited 1453 adults from rural Victoria, Australia and measured their serum Mg with a level <0.70 mmol/L as hypomagnesaemia. After adjusting for confounders, they found that compared with control, hypomagnesaemia was 10.51-fold more common with new diabetes and 8.63-fold more common with known diabetes, but was not seen with IGT or IFG. They concluded that diabetes is associated with hypomagnesaemia, but not its pre-cursor states.

The inconsistence of our results with the above previous study [22] may suggest the different profiles among populations who from different countries (geographical difference), which may be related to habits of food intake in different populations. For instance, an early study from China [23] has indicated that patients with hypertension, IFG or diabetes took less Mg than controls and women also took less Mg than men. A recent meta-analysis of 13 prospective cohort studies involving 536,318 participants and 24,516 cases has clearly indicated the inverse association between Mg intake and T2D risk [17].

In the present study, we demonstrated for the first time that T1D patients also exhibited a significant low of serum Mg level compared to control. In terms of serum Mg levels in T1D patients there were only few reports. An early study measured the plasma concentration of copper, zinc and Mg in 37 patients with T1D and 25 healthy subjects and showed that mean plasma concentrations of copper and Mg were comparable between diabetic patients and controls [24]. This finding was supported by a recent cross-sectional study, showing that among the 50 T1D patients and 50 age-matched healthy children from Rafsanjan city, Iran, serum Mg level were more than 2 mg/dl with no significant difference between control and T1D patients [25]. However, a few other studies showed a significantly low serum Mg in T1D patients compared to control [26], [27]. The discrepancy may also be derived from populations since the first two were from Indian, and Iran, respectively, while the latter two from Slovak Republic and Poland, respectively.

In the present study, we have systemically compared the urinary Mg among subgroups, from which, we demonstrated the increased secretion of urinary Mg only in T2D and T1D patients compared to control.

Several studies have indicated the positive correlation of low serum Mg levels with the incidence of various diabetic complications [13], [20], [28], [29]; therefore, we have compared the serum and urinary levels of Mg among subgroups of T2D patients without complication and with DN, DR or DPN. We did not find any significant difference for either serum or urinary Mg between uncomplicated T2D patients and T2D patients with either DN and DR or DPN. An early study also reported that there was no significant difference for serum Mg among three groups [10]: uncomplicated T2D (n = 30, serum Mg: 1.67±0.084), T2D with coronary atherosclerosis (n = 30, 1.60±0.072), and with peripheral vascular disease (n = 30, 1.71±0.085). However, there were also reports that showed the low level of serum Mg in T2D with food ulcer [20] and retinopathy [30] compared to uncomplicated T2D patients. For the discrepancy among these studies, the following reasons may be considered:

The population from different countries may be the first major factor. For instance, Sharma et al. have demonstrated that in 50 T1D and T2D patients with or without complications and 40 normal healthy persons, serum Mg was significantly low in diabetes with complication than without complications [30], which is support of a few previous studies [31], [32]. However, there was also a study that showed that low serum Mg was not associated with the occurrence of retinopathy in black Africans [14]. Second the duration of diabetes may affect such association. For instance, Sharma et al have demonstrated the during of diabetes with serum Mg were inversely related [30]. In addition, mean serum Mg level was found to be lower among those with known diabetes than those with new diabetes, which also suggests the length of diabetes may affect the serum Mg [10].

Association of Mg with Ca in either serum or urine

In the present study, we demonstrated the significantly positive association of serum Mg with serum Ca in T2D patients, and of urinary Mg with urinary Ca in controls and those with either IGT or T2D. A positive correlation of urinary Mg with urinary Ca has been reported in an early study [33]. In a group of Nigerian diabetic patients, urinary excretion fractions of Mg and Ca were significantly increased in the diabetic group compared with controls with a significant positive correlation between Mg and Ca. We also demonstrated the increase secretion of Mg in urine for both T1D and T2D patients (Fig. 1B) and a strongly positive correlation of urinary Mg and Ca (Fig. 3B). The results from our study and others suggest that the renal tubular reabsorption of Mg and Ca is reduced in diabetic patients resulting in increased urinary losses of the two divalent cations.

In animal model of streptozotocin-induced diabetic rats [34], the increased urinary secretion of Mg and Ca was mechanistically associated to the increased gene expression and protein abundance of Ca and Mg transporters in the kidney. Insulin administration completely corrected the hyperglycemia-associated hypercalciuria and hypermagnesiuria, and reversed the increase of Ca and Mg transporter abundance. Therefore, a recent analysis of the interaction between serum Mg and Ca, defined as Mg×Ca, revealed that serum Mg and Ca, and Mg×Ca all had significant negative correlations with eGFR with the Mg×Ca showing the strongest correlation with eGFR [35].

Effect of statin treatment on serum or urinary Mg

The above findings suggest that there was a risk for reducing either serum Mg or urinary Mg. Since we have appreciated, based on the above discussion, that Mg appears to play a vital function in the prevention of insulin resistance, diabetes and diabetic complications; In addition, Mg has been also reported to have anti-inflammatory and statin-like effect as well as the stimulating effect of Mg at physiological level on the statin passive diffusion into hepatocytes and their pharmacological actions on cholesterol biosynthesis [37]. Therefore, combination of statin administration with supplementation of certain amount of Mg may be required to avoid the reduction of the Mg level either in the blood or urine caused by supplementation with statin alone. In fact, the combination of Mg with a statin has been recently suggested as a potential and seemingly-promising avenue to reduce cholesterol, C-reactive protein, and cardiovascular disorders [38].

The effect of Mg deficiency on the prevalence of metabolic syndrome and diabetes as well as diabetic complications has received a great attention. Mg as the fourth most abundant cation in the body plays a fundamental role as a cofactor in various enzymatic reactions involving energy metabolism, including insulin secretion, binding, and activity. Chronic Mg deficiency has been associated with the development of insulin resistance. The present study investigated, for the first time, the serum and urinary levels of Mg in different groups of the Chinese population who live in the Northeast areas of China.
We found that:

Therefore, the potential impact of Mg in metabolic syndrome, diabetes and diabetes-related or no-related cardiovascular disorders needs to be received special attention. The abundance and low cost of the supplement, the relatively low side effect profile and the paucity of information in the literature about this common mineral suggest that more studies should be conducted to determine its safety and efficacy. Furthermore, the optimal combination of Mg supplementation with other efficient medication need to be developed to efficiently prevent and treat diabetes and diabetic complications.

Diabetics have problems with low Magnesium, especially if taking statins – Aug 2013         Printer Friendly Follow this page for updates
This page is in the following categories (# of items in each category)
Diabetes 473 Vitamin D and Magnesium 316