Effect of Vitamin D Supplementation on the Prognosis of Post-stroke Fatigue: A Retrospective Cohort Study 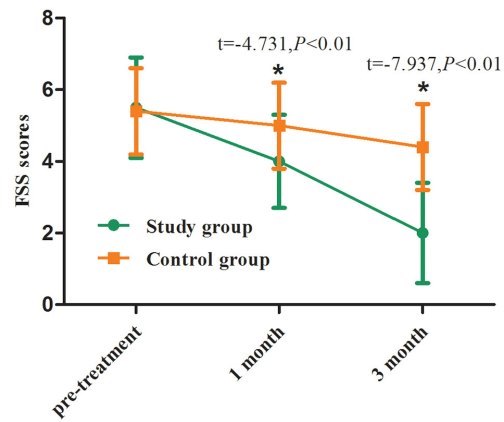 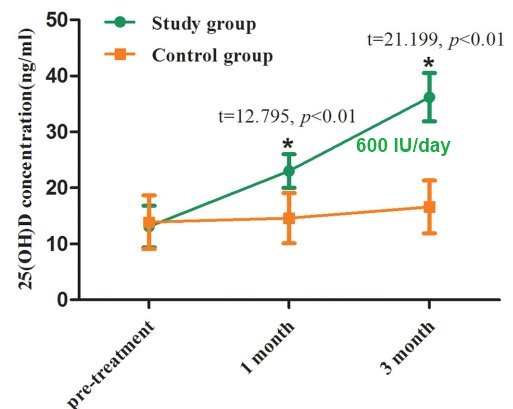 Objective: We aimed to evaluate the effect of vitamin D supplementation in post-stroke fatigue (PSF) patients with vitamin D deficiency on fatigue symptoms and outcomes. Methods: Patients with primary acute ischemic stroke (AIS) were recruited consecutively from July 2016 to June 2018. Post-stroke fatigue patients were screened out with the Fatigue Severity Scale (FSS) questionnaire, serum concentrations of 25-hydroxyvitamin D [25-(OH)-D] were assessed with enzyme-linked immunosorbent assay (ELISA), and neurological function was evaluated with FSS and modified Rankin Scale (mRS) scoring criteria. Post-stroke fatigue patients with vitamin D deficiency were divided into two groups: a study group in which patients received vitamin D supplementation (cholecalciferol, 600 IU/day) along with usual care, and a control group in which patients received usual care alone. At the end of 1 and 3 months after treatment, all PSE patients accepted re-measurement of serum vitamin D and re-evaluation of fatigue and neurological function.

Results: A total of 532 AIS patients were consecutively recruited to participate in this study. Patients without PSF, non-vitamin D deficiency, pre-stroke fatigue, or vitamin D supplementation were excluded from the study. In addition, patients who were lost to follow-up were also excluded. Finally, 139 out of 532 (26.1%) patients with PSF and vitamin D deficiency received vitamin D supplementation treatment. Fatigue Severity Scale score was significantly lower in the study group than in the control group at 1 month (t = -4.731, p < 0.01) and 3 months (t = -7.937, p < 0.01) after treatment. One month after treatment, mRS score in the study group was lower than that in the control group without statistical difference (t = -0.660, p > 0.05), whereas mRS was significantly higher in the study group than in the control group at 3 months after treatment (t = -4.715, p < 0.01).

Conclusions: Our results indicated that vitamin D supplementation could improve fatigue symptoms and neurological outcomes in PSF patients with vitamin D deficiency. Subject to replication in other settings, a randomized controlled trial (RCT) might be undertaken to validate the potential beneficial impact of vitamin D supplementation in post-stroke patients found to be vitamin D deficient.
&nbspDownload the PDF from VitaminDWiki

Similar to many previous studies, this study would have had far more benefits if it
1) Had given a Vitamin D loading dose soon after the stroke
2) Had used larger doses
3) Had started Vitamin D years earlier, thus preventing the stroke

Post-stroke fatigue cut in half by Vitamin D (just 600 IU daily in 3 months) – Nov 2021         Printer Friendly PDF this page! Follow this page for updates
This page is in the following categories (# of items in each category)
Intervention 731 Stroke 106