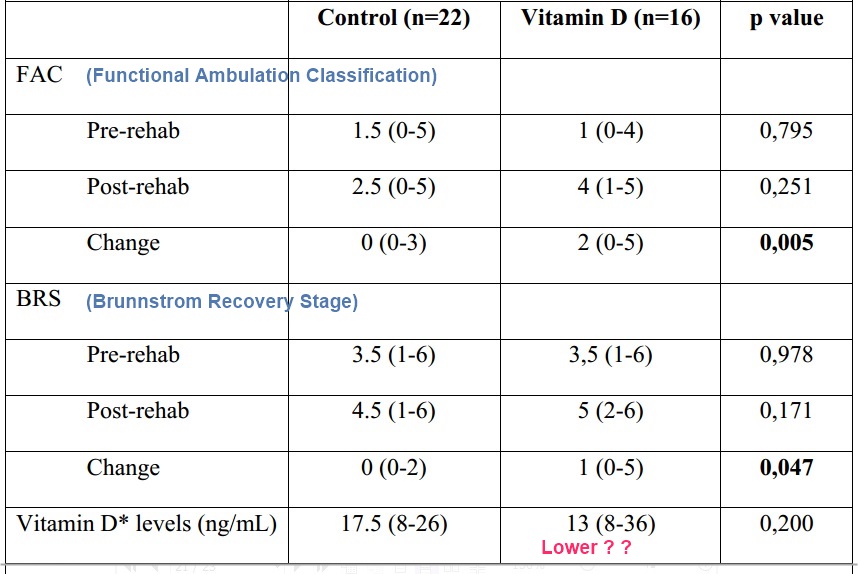 Probably would have recovered from stoke much better if had first restored the vitamin D levels
- perhaps 4 of the 50,000 IU pills in the first day or week

Items in both categories Stroke and Intervention

Aim: The aim of this study was to investigate the effect of vitamin D supplementation on ambulation and mobility in hospitalized patients undergoing stroke rehabilitation.

Material and methods: This study was conducted retrospectively between September 2020 and October 2020 in Gazi University Faculty of Medicine Physical Medicine and Rehabilitation Department. Seventy-six patients who received inpatient stroke rehabilitation treatment between May 2018 and February 2020 were included in the study. The patients were divided into two groups as those who did and did not take vitamin D supplements. Lower extremity motor function and ambulation status were compared using Brunnstrom Recovery Stage (lower extremity) and Functional Ambulation Classification (FAC) scores before and after rehabilitation.

Conclusion: Vitamin D supplementation may increase the success of rehabilitation therapy in patients during the first 3 months post-stroke.

Stroke patients getting weekly 50,000 IU Vitamin D did better – trial March 2021         Printer Friendly PDF this page! Follow this page for updates
This page is in the following categories (# of items in each category)
Intervention 757 Stroke 109 Intervention - non daily 237

One pill every two weeks gives you all the vitamin D most adults needPost-stroke depression not reduced by 2,000 IU of vitamin D (not a surprise) ...Post-stroke fatigue cut in half by Vitamin D (just 600 IU daily in 3 months) ...Stroke 22 percent more likely if low Vitamin D – meta-analysis July 2021