Autism category in VitaminDWiki starts with

Chart from the study, comments in red by VitaminDWiki 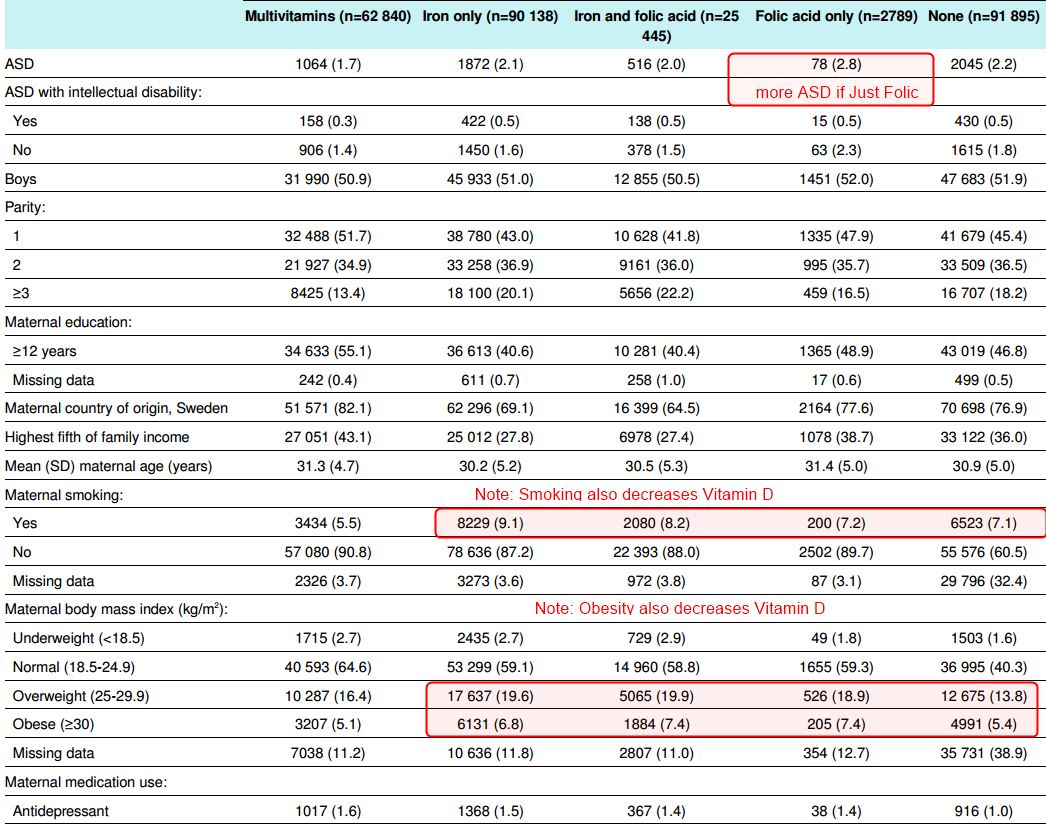 Objective To determine whether nutritional supplementation during pregnancy is associated with a reduced risk of autism spectrum disorder (ASD) with and without intellectual disability in offspring.

Participants 273 107 mother-child pairs identified through population registers. The study sample was restricted to children who were aged 4 to 15 years by the end of follow-up on 31 December 2011 and were born between 1996 and 2007.

Exposures Multivitamin, iron, and folic acid supplement use was reported at the first antenatal visit.

Main outcome measure Diagnosis of ASD with and without intellectual disability in children determined from register data up to 31 December 2011.

Results Prevalence of ASD with intellectual disability was 0.26% (158 cases in 61 934) in the maternal multivitamin use group and 0.48% (430 cases in 90 480) in the no nutritional supplementation use group. Maternal multivitamin use with or without additional iron or folic acid, or both was associated with lower odds of ASD with intellectual disability in the child compared with mothers who did not use multivitamins, iron, and folic acid (odds ratio 0.69, 95% confidence interval 0.57 to 0.84). Similar estimates were found in propensity score matched (0.68, 0.54 to 0.86) and sibling control (0.77, 0.52 to 1.15) matched analyses, though the confidence interval for the latter association included 1.0 and was therefore not statistically significant. There was no consistent evidence that either iron or folic acid use were inversely associated with ASD prevalence.

Conclusions Maternal multivitamin supplementation during pregnancy may be inversely associated with ASD with intellectual disability in offspring. Further scrutiny of maternal nutrition and its role in the cause of autism is recommended.

Printer Friendly PDF this page! Follow this page for updates
This page is in the following categories (# of items in each category)
Pregnancy 747 Autism 132
Edit Comments Files 2