Folic Acid is used for Folate fortification because the synthetic form is stable
Note: Vitamin D is 100X better than folic acid during pregnancy
Most people convert Folic Acid into the naturally occuring form - Folate
Some women ( and men) do not convert Folic acid, and it builds up in the body
Often, such as several times on the page, the two terms are incorrectly used interchangeably
See also VitaminDWiki


10% of women had high folate levels at time of birth
Further studies needed to determine why Folate levels were so high:

4X more likely to have autistic child if just Folate was too high.
Study being presented at a conference May 13, 2016

Too much folate in pregnant women increases risk for autism, study suggests ScienceDaily

Map of one MTHFR gene problem 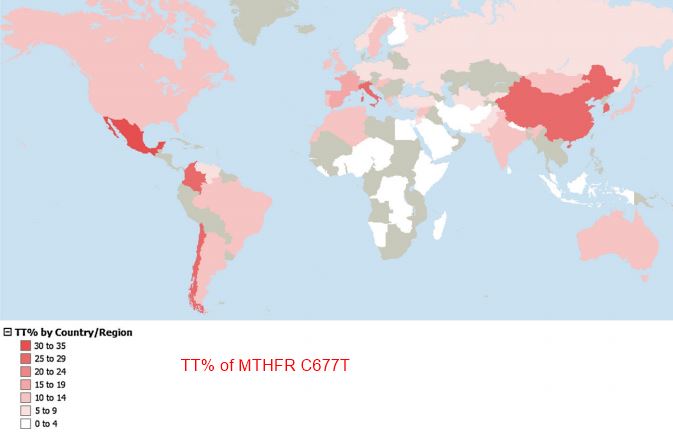 &nbspFrom PDF of study on VitaminDWiki

Folic acid fortification: the good, the bad, and the puzzle of vitamin B-12

Problem with High folate and Low B-12
Am J Clin Nutr January 2007, vol. 85 no. 1 3-5
A David Smith
1From the Oxford Project to Investigate Memory and Ageing (OPTIMA), Department of Physiology, Anatomy and Genetics, University of Oxford, Oxford, United Kingdom

Policy decision making in any country considering fortification with one or several micronutrients should not be limited to the documentation of the indications for fortification. … A plan for evaluating the effectiveness and safety of the intervention is also needed (1).
We would not be allowed to conduct a clinical trial of a drug without proper monitoring procedures for both expected and unexpected outcomes; however, such a scenario occurred in 1998 when the Food and Drug Administration mandated that flour products in the United States be fortified with folic acid (pteroylglutamic acid)—a substance forming only a very minor component of the folates in unfortified food (2). The argument then was that randomized clinical trials had proven that folic acid taken in very early pregnancy can markedly reduce the risk that an infant will be born with a neural tube defect (NTD). The consequence was, however, that for each NTD prevented, several hundred thousand people were to be exposed, without choice, to extra folic acid. Despite this concern, no studies have been carried out in nonchildbearing subsets of the population to see whether they might also benefit from, or could even be harmed by, exposure to folic acid. The prevailing view was that it must be “a good thing” to give extra folic acid, not only to prevent NTDs but also to lower plasma homocysteine concentrations and perhaps prevent cardiovascular disease. Although folic acid fortification has reduced the number of NTDs (3), recent trials suggest a limited effect, or no effect, of folic acid intervention on cardiovascular disease, although the outcome may not be entirely negative (4-6).

In the absence of formal federal monitoring of possible undesirable effects of fortification, the academic research community has been left to take up the challenge, and recent studies have resulted in increasing cause for concern. In this Journal, Kim (7) raised the question in 2004 of whether folic acid fortification would prevent or promote cancer, a question still not answered (8). In 2005, an increased risk of cognitive decline was reported in elderly persons who took folic acid supplements in doses >400 μg/d (9). However, an interaction between folate intake and vitamin B-12 intake was observed such that the cognitive decline was less marked in those who also took high-dose vitamin B-12–containing supplements.

Two other recent reports deserve special attention because they have shown that some sectors of the population might suffer adverse effects from folic acid fortification. In this issue of the Journal, Morris et al (10) report on a group of nearly 1500 healthy elderly persons aged ≥60 y in whom anemia, macrocytosis, and cognitive function were assessed. The test used for cognitive function, the Digit Symbol-Coding subtest of the Wechsler Adult Intelligence Scale III, is well validated and is quite sensitive to cognitive impairment; it mainly reflects processing speed but also tests memory. This subset of the US National Health and Nutrition Examination Survey cohort was studied between 1999 and 2002, well after the time when food began being fortified with folic acid. As expected, a substantial proportion (20%) of the cohort had a high concentration of serum folate, defined as a concentration >59 nmol/L. Interestingly, Morris et al report both a “good” and a “not-so-good” side of folate. In agreement with current knowledge, they found that a low vitamin B-12 status is associated with macrocytosis, anemia, and cognitive impairment. The key finding in this report concerns interactions between folate status and vitamin B-12 status. The “good news” is that, in subjects with a normal vitamin B-12 status, high serum folate (>59 nmol/L) was associated with protection from cognitive impairment. This finding is remarkable in a population with a much higher mean folate concentration (39 nmol/L) than that seen in countries where there is no mandatory folate fortification. A similar result was reported for Latinos living in California, where higher red blood cell folate concentrations after fortification were associated with protection from cognitive impairment and dementia (11). Simply put, if your vitamin B-12 status is good, folate supplementation is good for you!

A notable feature of the 3 recent studies that described an adverse effect of high folate status is that many participants (33–67%) in each of the studies reported the use of folate-containing supplements (9, 10, 16). Folic acid is used to fortify food and is contained in almost all folate-containing supplements. Hence, these subjects were being exposed to folic acid from supplements as well as from fortified food—a matter that has already raised concern (17). It is perhaps not surprising that Troen et al (16) detected unmetabolized folic acid in fasting plasma samples from 78% of the subjects in their study.

Assuming that the findings of these studies will be confirmed, challenging questions about future research and health policies that relate to the puzzling interactions between folate and vitamin B-12 will need to be answered. Some of these questions are as follows:

What are the wider implications of the new reports? The immediate concern relates predominantly to older persons. Morris et al found that ≈4% of the elderly persons they studied had a combination of low vitamin B-12 status and high folate status. If the same proportion of all elderly persons in the United States is affected, then ≈1.8 million elderly might be at increased risk of cognitive impairment and anemia because of an imbalance between folate and vitamin B-12. Thus, this large number of elderly at increased risk of cognitive impairment and anemia has to be balanced against the number of infants in whom NTDs are being prevented. Simply put, is it ethical to save one infant from developing an NTD and hopefully provide that child a high-quality life but increase the risk of poorer health in >1000 elderly persons? Questions that surely need to be discussed include the following:

Light and Vitamins - D, A, C, B1, B2, B3, B9, B12, E – April 2018Low birth weight associated low Vitamin D (little sunshine in China in this c...Autism 4 times more likely if low vitamin D during first trimester – Oct 2016Autism rate cut in half when multivitamins (including vitamin D) used during ...Autism risk reduced 2X by prenatal vitamins (Vitamin D or Folic) – Feb 2019Off topic: Folic Acid - the horror story (for a small percentage of people) -...Autism associated with low Zinc during pregnancy (Zinc is needed by Vitamin D...Increased cows milk allergy if Folic acid or Folate added to vitamin D during...Vitamin D has treated Multiple Sclerosis and autoimmune diseases for 16 years...Vitamin D is 100X better than folic acid during pregnancyFolic acid reduces both premature births and neural tube defects – March 2017Hypothesis – Vitamin B-12 deficiency is associated with Vitamin D deficiencyVitamin D is at least 100 X better than Folic AcidHypothesis - Autism can be different between twins due to HPV differences in ...Vitamin B12 in addition to Foliate is needed to reduce neural tube defects – ...Neural tube defects more likely due to low vitamin D than low Folate – April ...Off topic – Folate can be produced by micro-organisms, can avoid synthetic Fo...Vitamin D and autism - treat: 300 IU per kg per day, prevent: during pregnanc...Autism treated by Vitamin B12 - several studies