Reasons to work while sick

OBJECTIVES: The aim of this study was to estimate the prevalence of sickness presenteeism (SP), its associated factors and the reasons given for SP episodes, among the overall salaried population and excluding the 'healthy' workers.
DESIGN: Population-based cross-sectional study.
SETTING: Salaried population in Spain.
PARTICIPANTS: Data were obtained from the third Spanish Psychosocial Risks Survey (2016), carried out between October and December 2016, n=1615.
MAIN OUTCOME MEASURES: Self-reported episodes of SP and their reasons.
RESULTS: 23.0% (95% CI 19.2 to 26.8) of the workers exhibit SP, whereas, among those manifesting having had some health problem in the preceding year, the figure was 53.0% (95% CI 46.9 to 59.1). The factors associated with SP when we study all workers are age, seniority, salary structure, working more than 48 hours, the contribution of worker's wage to the total household income and downsizing; factors among the 'unhealthy' workers are working more than 48 hours and not having a contract. The most common reason for SP is 'did not want to burden my colleagues', 45.7% (95% CI 37.3 to 54.4), whereas "'I could not afford it for economic reasons' ranked third, 35.9% (29.4% to 42.9%), and 27.5% (21.3% to 34.6%) of the workers report 'worried about being laid off' as a reason for going to work despite being ill.
CONCLUSIONS:
The estimated frequency of SP in Spain is lower than certain other countries, such as the Scandinavian countries. The factors associated vary depending on the population analysed (all workers or excluding 'healthy' workers). The reason 'I was worried about being laid off' was much more common than the estimates for Sweden or Norway. 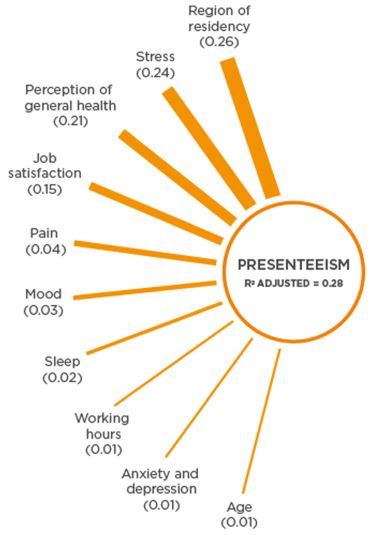 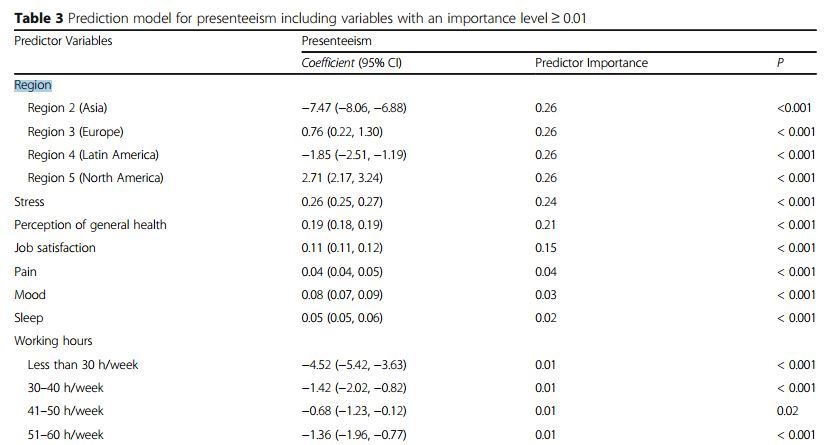 The Hidden Costs of Presenteeism: Causes and Solutions Jan 2018 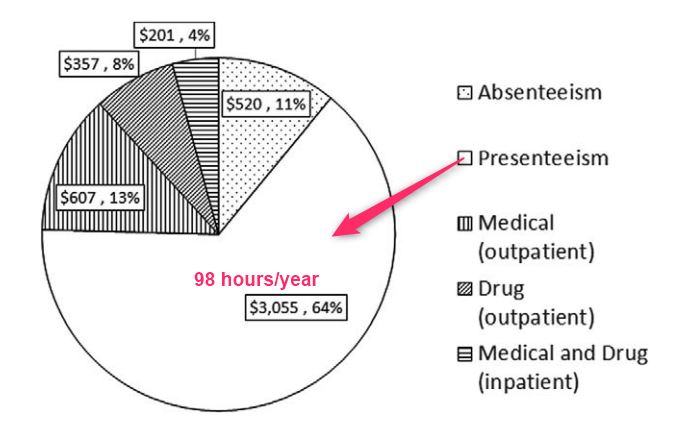 OBJECTIVE:This study aimed to examine a detailed breakdown of costs (absenteeism, presenteeism, and medical/pharmaceutical expenses), of the employees in four pharmaceutical companies in Japan.

METHODS: This is a cross-sectional study. Absenteeism and presenteeism were measured by a self-administered questionnaire for workers, and their costs were estimated using the human capital approach. Presenteeism was evaluated by the degree affected quality and quantity of work. Medical and pharmaceutical expenses were obtained by insurance claims.

RESULTS: The monetary value due to absenteeism was $520 per person per year (11%), that of presenteeism was $3055 (64%), and medical/pharmaceutical expenses were $1165 (25%). Two of the highest total cost burdens from chronic illness were related to mental (behavioral) health conditions and musculoskeletal disorders.

CONCLUSION: A total cost approach can help employers set priorities for occupational health, safety, and population health management initiatives.
&nbspDownload the PDF from VitaminDWiki
From PDF
Payroll cost per hour $31.15
CONCLUSION: The monetary value per person per year due to

It is notable that the ratio of health-related productivity costs (absenteeism and presenteeism) to medical/pharmaceutical costs is
3 to 1 in this study of employers/employees in Japan and is similar to the 2.3 to 1 ratio revealed in the past study of U.S. employers/employees. 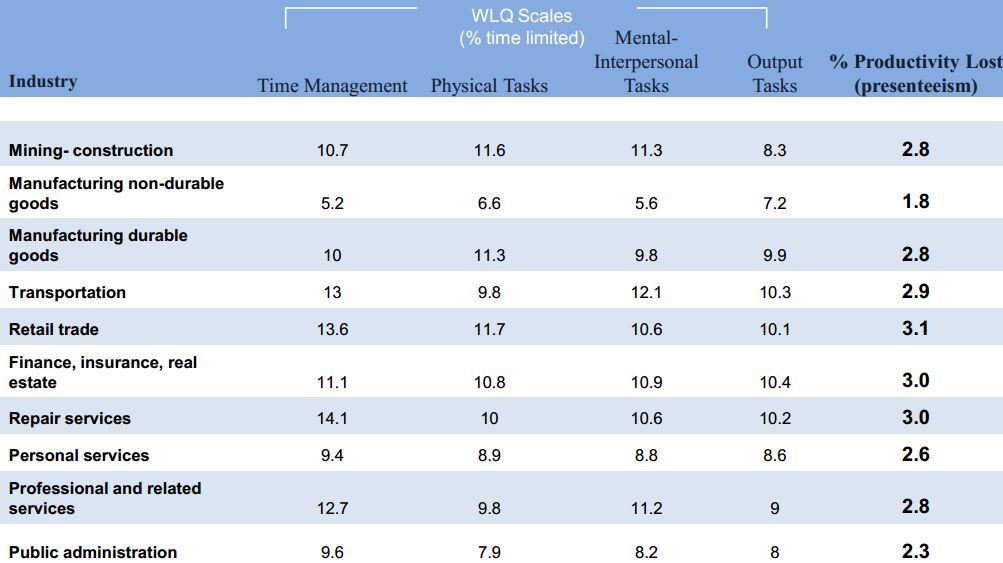 Stress and Lifestyle risks are the main presenteeism cost drivers 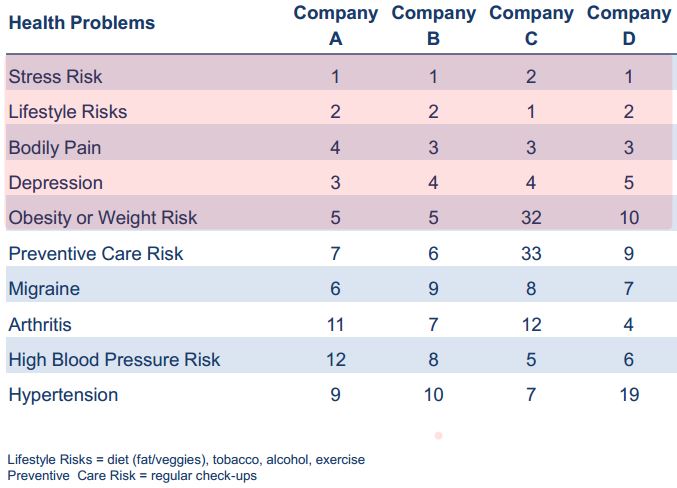 The primary objective of this study was to explore the mechanisms and conditions whereby Tension-Type Headache (TTH) presenteeism relates to health-related loss of productivity as a result of both reduced physical and mental health. To this end, Structural Equation Modeling (SEM) was used to conduct a secondary data analysis of a randomized clinical trial involving 78 Tension-type Headache (TTH) patients. The results showed that TTH presenteeism did not directly relate to health-related loss of productivity, either due to physical, or mental health problems. However, through anxiety-state, TTH presenteeism decreased patients' productivity, as consequence of reduced physical and mental health. Moreover, by increasing the severity of the Tension-Type Headache, TTH presenteeism indirectly decreased patients' productivity as consequence of reduced physical health (but not mental health).
Finally, our results show that such indirect effects only occur when the cause of TTH is non-mechanical (e.g., hormonal causes, etc.). Our work provides an integrative model that can inform organizational behaviorists and health professionals (e.g., physiotherapists). Implications for organizational health are discussed.

For those withTension Headaches (from PDF)
8.6 days/month reduced performance - mean performance of 67% out of 100% ==> 3 days/ month
VitaminDWiki guess of presenteeism due to tension headaches for average employee: 2 days/year
3 days/month * 12 months/year * 15% of employees get headaches * 30% of the year = 2 days/year

Note: This study does not consider migraine headache or cluster headaches (which are treated/prevented by Vitamin D and Magnesium)

OBJECTIVES: This study investigated the relationship between presenteeism and health-related quality of life (HRQoL) among Japanese adults with chronic lower back pain (CLBP).

DESIGN: This was a retrospective, cross-sectional study.

SETTING: Data were collected via a self-administered online survey of the Japanese adult general population.

PARTICIPANTS: The present study used 2014 Japan National Health and Wellness Survey (NHWS) data (n=30 000). Specifically, data were included from NHWS respondents who self-reported being employed in the past week and having experienced LBP in the past month, with these symptoms lasting for at least 3 months (n=239). 84 (35.1%) participants in this study were female.

OBJECTIVE:to identify the prevalence of musculoskeletal symptoms in two stages (before and after six months of the first stage) and its association with presenteeism among nursing professionals.

METHOD:
longitudinal study with quantitative data conducted in a Brazilian teaching hospital with 211 nursing professionals. The instruments used for data collection were: Cultural and Psychosocial Influences on Disability - CUPID Questionnaire, used to identify the musculoskeletal symptoms and the Stanford Presenteeism Scale, used to verify presenteeism. The instruments were validated for Brazilian Portuguese. The study was approved by the Human Research Ethics Committee. Descriptive statistics, Mann Whitney test and regression analysis were used to analyze the data.

CONCLUSION:
presenteeism lead to a reduction in work performance and was manifested in the presence of musculoskeletal symptoms. In addition, shoulder pain caused loss of concentration at work.
&nbspDownload the PDF from VitaminDWiki

OBJECTIVE: To estimate direct medical and indirect costs attributable to diabetes in each U.S. state in total and per person with diabetes.

CONCLUSIONS:
Economic costs attributable to diabetes were large and varied widely across states. Our comprehensive state-specific estimates provide essential information needed by state policymakers to monitor the economic burden of the disease and to better plan and evaluate interventions for preventing type 2 diabetes and managing diabetes in their states.

From PDF
Presenteeism average cost per person with Diabetes $1,732 (2017 dollars)

The annual cost of an obese employee in due to Presenteeism: ~$1,000 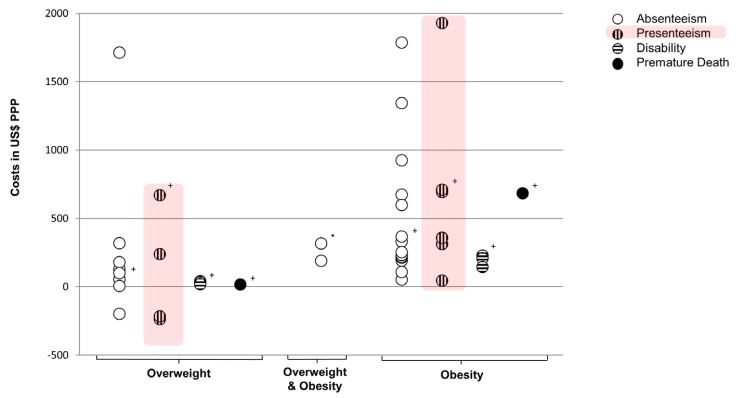 Methods A systematic search was conducted in eight electronic databases (PubMed, Cochrane Library, Web of Science Core Collection, PsychInfo, Cinahl, EconLit and ClinicalTrial.gov). Additional studies were added from reference lists of original studies and reviews. Studies were eligible if they were published between January 2000 and June 2017 and included monetary estimates of indirect costs of overweight and obesity. The authors reviewed studies independently and assessed their quality.

Results Of the 3626 search results, 50 studies met the inclusion criteria. A narrative synthesis of the reviewed studies revealed substantial costs due to lost productivity among workers with obesity. Especially absenteeism and presenteeism contribute to high indirect costs. However, the methodologies and results vary greatly, especially regarding the cost of overweight, which was even associated with lower indirect costs than normal weight in three studies.

Conclusion The evidence predominantly confirms substantial short-term and long-term indirect costs of overweight and obesity in the absence of effective customised prevention programmes and thus demonstrates the extent of the burden of obesity beyond the healthcare sector.
From PDF: Presenteeism
Nine studies included the effect of reduced productivity at work (presenteeism) due to overweight or obesity, which was assessed by using an employee survey. 31-33 38 41 44 46 48 51 While costs due to presenteeism among individuals with overweight ranged between -$611 31 and $1669, 33 costs among individuals with obesity were between $1146 and $4175. 31 Surprisingly, in Peake’s study, the cost of presenteeism among employees with overweight ($474) was lower than for individuals with normal weight ($695).35 Similarly, Finkelstein et al estimated lower costs among men with overweight compared with men with normal weight.31 The excess cost of obesity ranged from $429 to $4175 for men and from $927 to $3341 for women.31

STUDY OBJECTIVES: To estimate the economic cost (financial and nonfinancial) of inadequate sleep in Australia for the 2016-2017 financial year and relate this to likely costs in similar economies.

CONCLUSIONS: The financial and nonfinancial costs associated with inadequate sleep are substantial. The estimated total financial cost of $17.88 billion represents 1.55 percent of Australian gross domestic product. The estimated nonfinancial cost of $27.33 billion represents 4.6 percent of the total Australian burden of disease for the year. These costs warrant substantial investment in preventive health measures to address the issue through education and regulation.

Table 2. Prevalences of the various categories of inadequate sleep

The word Presenteeism use in books:

Book on wellness and productivity

Kindle rent $7
Large book. Compares and contrasts many Presenteeism surveys.
The surveys ask how many of hours of the day the employee was unproductive, and by how much